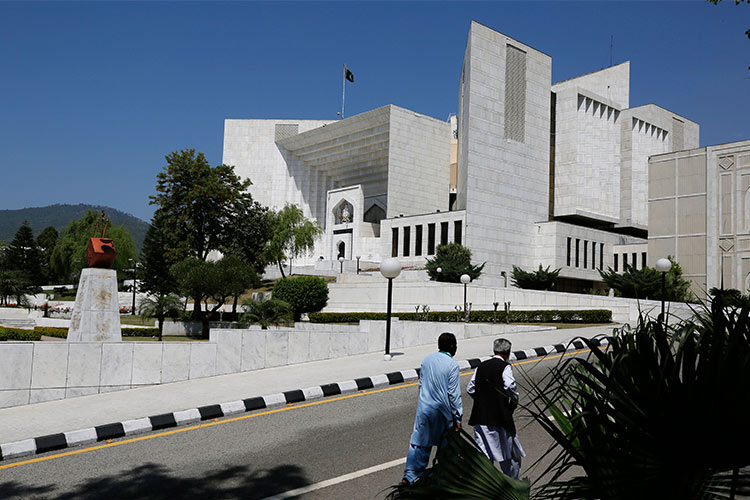 The Supreme Court on Tuesday declared Chaudhry Pervaiz Elahi as the chief minister elected by the Punjab Assembly in place of Hamza Shehbaz Sharif.

It also said that Elahi had secured 186 votes while Shahbaz had got 179 votes. It rejected the deputy speaker’s ruling of discarding ten votes of the Pakistan Muslim Leaguep-Q (PML-Q), cast in favour of Elahi.

If the governor is not available, President Arif Alvi would take oath from Elahi, the court said, and added that all the appointments by Hamza Shahbaz would be invalid.

During the election of the chief minister on Friday, Punjab Assembly deputy speaker Dost Muhammad Mazari had rejected all 10 votes cast by the Pakistan Muslim League-Q (PML-Q) on the pretext that they had violated the orders of their party chief, Chaudhry Shujaat Hussain, citing a letter he received from the patriarch which said he was asking his party lawmakers to back Hamza Shahbaz.

After counting the polled votes, the deputy speaker announced that Elahi bagged 186 votes, while Hamza Shehbaz could get 179 votes. However, he refrained from declaring Elahi the chief minister.

Instead, he indicated that as party chief, Shujaat Hussain’s instructions to PML-Q members to vote for Hamza instead of Elahi held greater sway.

The deputy speaker then announced that Hamza had won the election of chief minister, since the 10 deducted votes reduced Elahi’s tally to 176, while Hamza remained on top with 179.

Elahi challenged in the Supreme Court the discarding of 10 PML-Q votes in the light of its previous decision in which the court had held that it was the parliamentary party that takes decisions about casting of votes of its lawmakers in favour of one candidate or the other. The court verdict had held that the party head was not the authority to take such a decision.

Mazari’s Irfan Qadir informed the Supreme Court that his client had instructed him not to participate further in the case proceedings and he would instead file a petition for review of the court’s decision not to constitute a full bench.

Pakistan Peoples Party (PPP) counsel Farooq H. Naek also declined to participate in the court proceedings. However, they both stayed in the courtroom and watched the proceedings.

The ruling coalition had said yesterday it would boycott the proceedings in protest.

During the election, Mazari had decided against counting the votes of 10 Pakistan Muslim League-Q (PML-Q) lawmakers, which were cast in Pervez Elahi’s favour, citing a letter written by party President Chaudhry Shujaat Hussain in which he had instructed them to vote for Hamza instead.

Chief Justice Umar Ata Bandial remarked that the bench had not been provided with even one legal argument in favour of constituting a full bench during yesterday’s hearing. "You asked for time which is why the hearing was adjourned,” he told Naek. "Remain in the court and watch the proceedings. The legal question has not been answered yet,” he added.

The chief justice said lawyers for all sides had been given time to present their arguments. The Supreme Court had dismissed the caretaker cabinet in 1988, the chief justice continued, adding that the chief executive was the head of the cabinet. "We want to wrap up the matter of Punjab chief minister as soon as possible. We could not be convinced to constitute a full bench.”

He said that a full bench could not be formed till the second week of September and said the court would now hear arguments on the case’s merit. "There is a crisis in the province because of this case. Further delaying tactics will not be tolerated,” he cautioned.

Justice Bandial said that the 21st Amendment was brought up during the hearing. "Then Justice Azmat Saeed had observed regarding the 18th Amendment that the vote would be cast in accordance with the party head’s instructions.”

However, he noted that the present case was different and the court would need assistance. He also remarked that Article 63-A did not include the question of who would give the instructions. "At the time of the interpretation, the question was only about the consequences of defection.”

The chief justice said that if someone had comprehended the Constitution incorrectly, the interpretation could be cancelled. "Misinterpreting the Constitution means that the Constitution has not been understood correctly,” he said, adding that out of 17 judges, eight had given their opinions on the 21st Amendment.

"But this is not the majority’s decision because a majority of nine judges is required,” the chief justice observed, adding that back then, the bench comprised 17 judges.

Separately, the chief justice reiterated that he wanted to wind up the case at the earliest because of issues of governance and the crisis in Punjab.

He questioned whether the Supreme Court could be bound by the decision of eight of its 17 judges. "The majority of the full-court bench did not agree with the party head issuing directions,” he observed. "Those who boycotted court proceedings have shown enough grace to sit and watch them,” he remarked.

He then directed Elahi’s lawyer, Ali Zafar Shah, to assist the court in legal matters. The lawyer said that the court had heard detailed arguments yesterday. "The matter here doesn’t concern the interpretation of Article 63-A.

"The court has already interpreted it before. Here, the matter concerns the directions of the party head,” Shah said.

He pointed out that as per the 18th Amendment, the party head was given the power to take action against dissident members.

Shah Zafar said that in the judgement regarding the 21st Amendment, then Justice Jawad Khawaja had declared Article 63-A against the Constitution. "He was of the opinion that the law stops members from voting freely.

Marari’s lawyer Irfan Qadir said that his client had decided against participating in the case further. "There has been an unprecedented boycott across the country against the apex court’s verdict [on the full court bench],” he told reporters. "My client has decided to exercise the constitutional right and file a plea for a review of yesterday’s decision.”

Qadir said that he was hopeful the review petition would be fixed before a full-court bench, or one separate from the three-member bench. "And I am sure the case will be heard on the grounds of merit.”

Referring to Justice Qazi Faez Isa’s case, he said that a nine-member bench was formed to hear the matter of one judge. "Why is a three-member bench hearing the matter which concerns the entire country?”

The Supreme Court, he added, had no right to interfere in the matters of the Parliament. "It should rather strengthen and stabilize it and vice versa.” 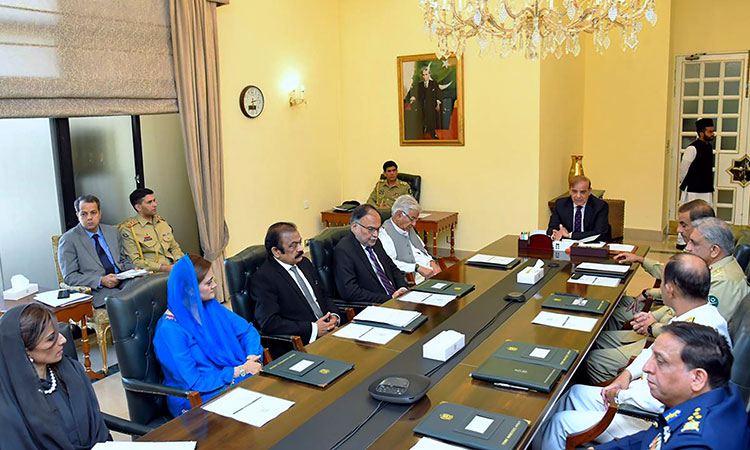 “The NSC, chaired by Prime Minister Shahbaz Sharif, discussed the telegram received from the Pakistan Embassy in Washington. Pakistan’s former ambassador to the US Asad Majeed briefed the committee on the context and content of his telegram..." 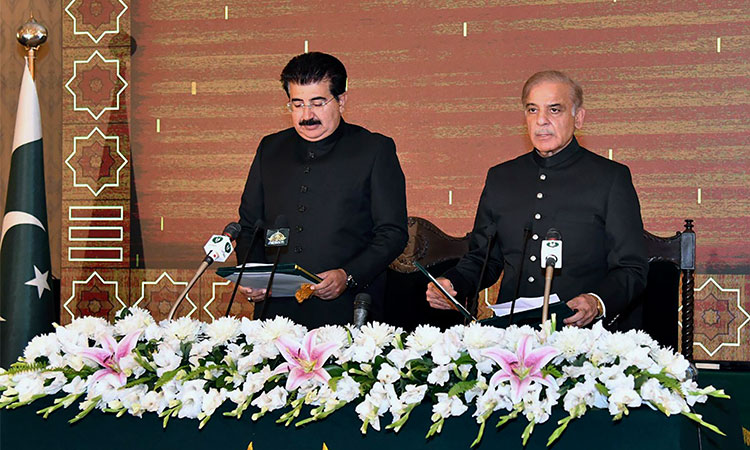 The oath was administered by the chairman of Pakistan's Senate, Sadiq Sanjrani, in the absence of President Arif Alvi, a member of Imran's party, who said he was unwell.