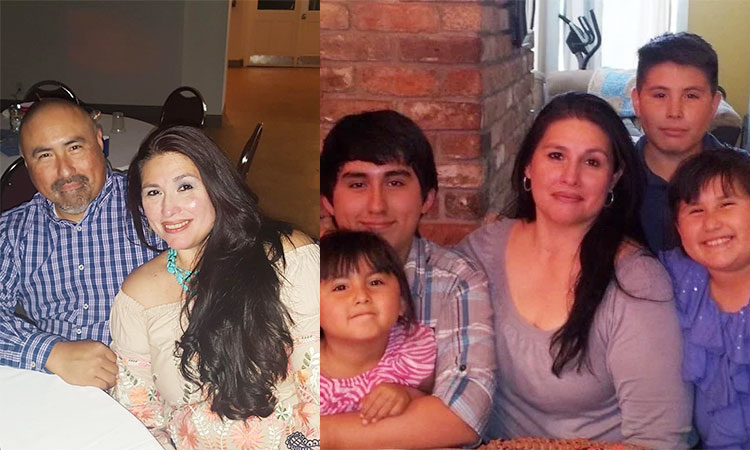 The husband of a heroic fourth grade teacher who was killed protecting her students during a massacre at a Texas elementary school has also died, members of the teacher's family said on Thursday.


Irma Garcia's family was already reeling from her death in the Texas school shooting that targeted her fourth grade classroom and killed her co-teacher and 19 students.

Then, a mere two days after the attack, her grieving husband collapsed and died at home from a heart attack, a family member said.

A GoFundMe page set up by Debra Austin, who said she was the cousin of teacher Irma Garcia, said that Irma's husband Joe "has tragically passed away this morning(5/26/2022) as a result of a medical emergency." 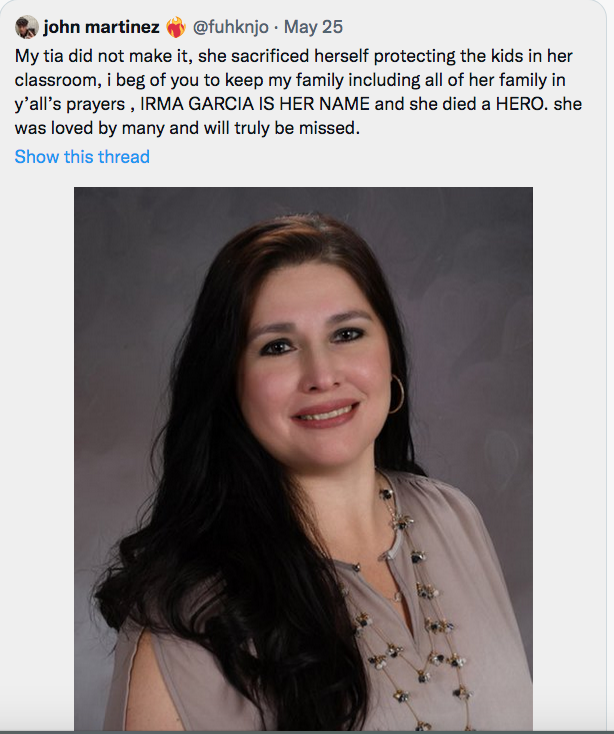 "I truly believe Joe died of a broken heart and losing the love of his life of more than 30 years was too much to bear," she added.

John Martinez, who identified himself as Garcia's nephew, also tweeted: "EXTREMELY heartbreaking and come with deep sorrow to say that my Tia (aunt) Irma's husband Joe Garcia has passed away due to grief." 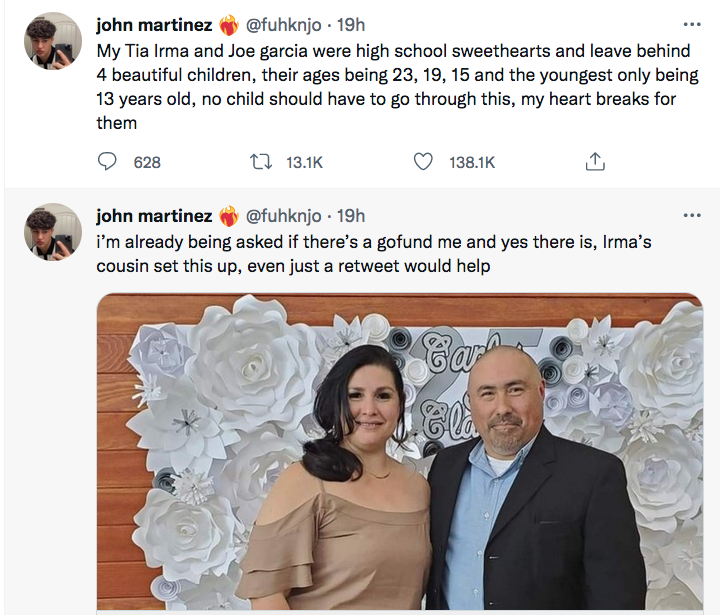 Joe Garcia, 50, dropped off flowers at his wife’s memorial on Thursday morning in Uvalde, Texas, and returned home, where he "pretty much just fell over” and died, Martinez told The New York Times.

Married for 24 years, the couple had four children. Martinez told The Detroit Free Press that the family was struggling to grasp that while the couple’s oldest son trained for combat in the Marine Corps, it was his mother who was shot to death.

"Stuff like this should not be happening in schools,” he told the newspaper. 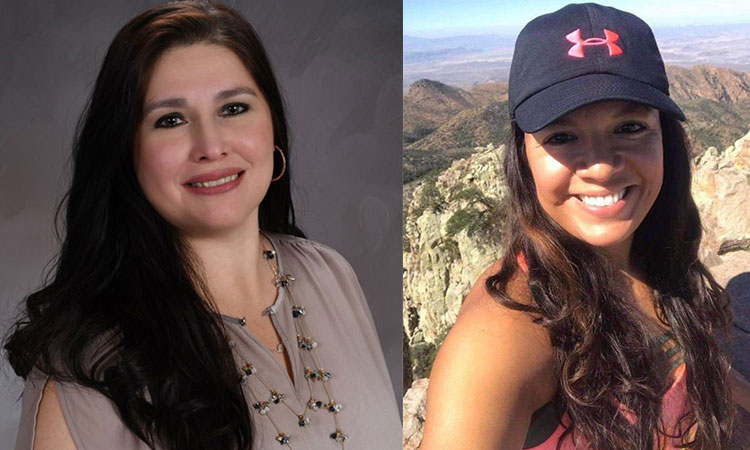 The Archdiocese of San Antonio and the Rushing-Estes-Knowles Mortuary confirmed Joe Garcia’s death to The Associated Press. AP was unable to independently reach members of the Garcia family on Thursday.

The motive for the massacre — the nation’s deadliest school shooting since the 2012 attack in Newtown, Connecticut — remained under investigation, with authorities saying the 18-year-old gunman had no known criminal or mental health history. 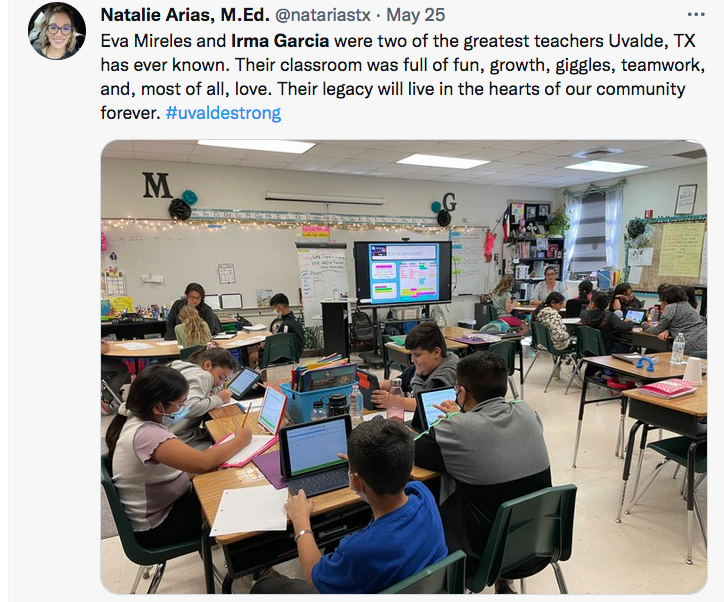 The rampage rocked a country already weary from gun violence and shattered the community of Uvalde, a largely Latino town of some 16,000 people about 120 kilometres from the Mexican border.

The Garcias loved to barbecue, 48-year-old Irma wrote in an online letter to her students at Robb Elementary School. She enjoyed listening to music and travelling to Concan, a community along the Frio River about 40 kilometres north of Uvalde.

The couple’s oldest child, Cristian, is a Marine. The couple's other son, Jose, attends Texas State University. Their eldest daughter, Lyliana, is a high school sophomore, while her younger sister is in the seventh grade. 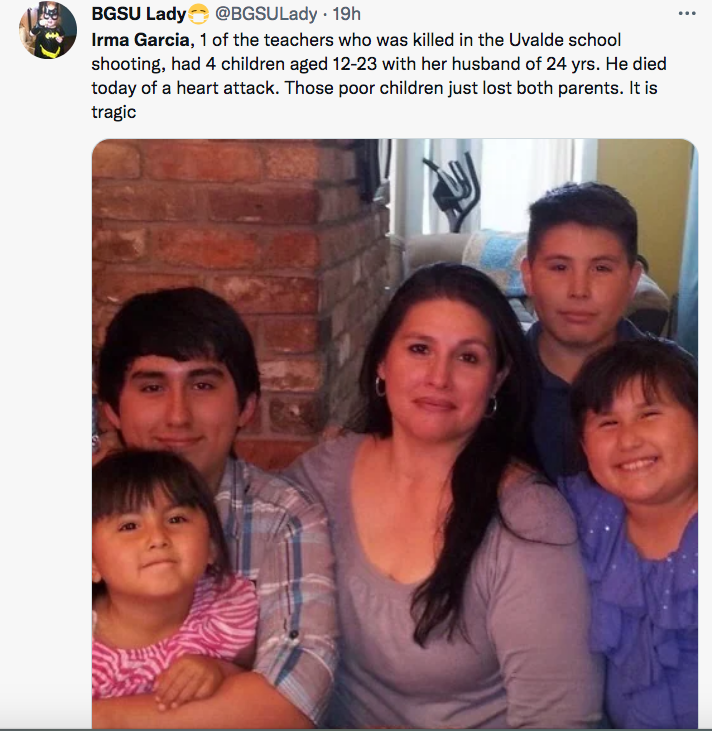 The school year, scheduled to end on Thursday, was Garcia's 23rd year of teaching — all of it at Robb. She was previously named the school's teacher of the year and was a 2019 recipient of the Trinity Prize for Excellence in Education from Trinity University.

For five years, Garcia co-taught with Eva Mireles, who also was killed. 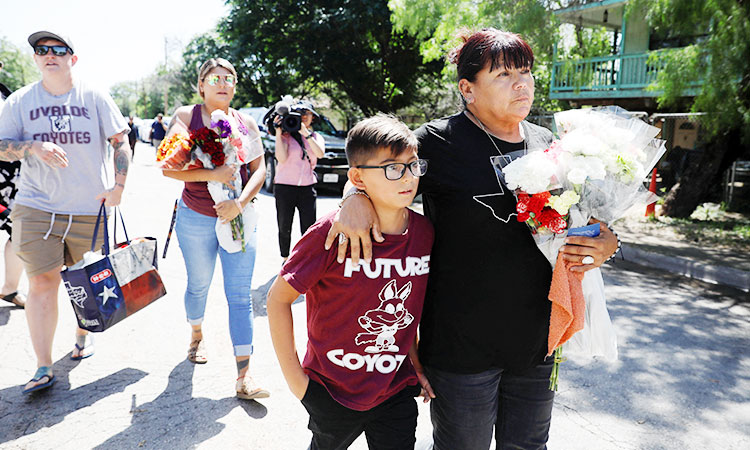 Dora Flores and her grandson arrive to Robb Elementary school with flowers, the day after a gunman killed 19 children and two teachers in Texas. Reuters

The suspect, Salvador Ramos, was inside the classroom for more than an hour before he was killed in a shootout with law enforcement, authorities said.

"Mrs Irma Garcia was my mentor when I began teaching," her colleague Allison McCullough wrote when Garcia was named teacher of the year. "The wealth of knowledge and patience that she showed me was life changing."