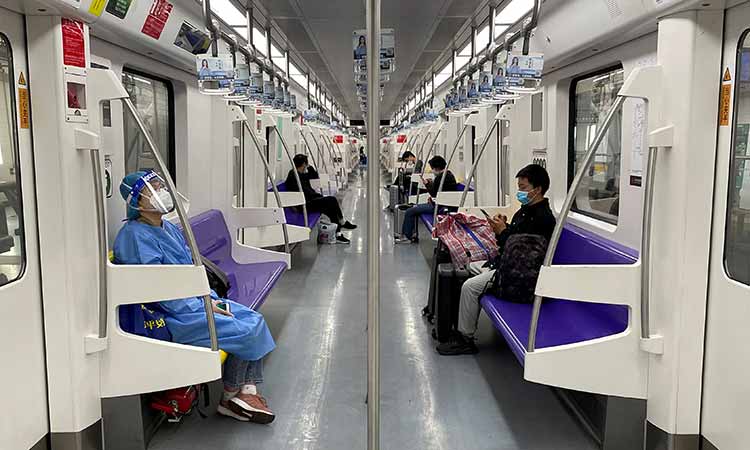 A passenger rides on a subway train on the first day of the subway services resumed in Shanghai on Sunday. Reuters

Shanghai partially restarted public transport Sunday, signaling a gradual reopening after nearly two months sealed off from the outside world.

China's largest city has been almost entirely locked down since April, when it became the epicentre of the country's worst coronavirus outbreak since the early days of the pandemic.

Unlike other major economies, Beijing has dug in its heels on a zero-Covid approach of stamping out clusters as they emerge, though this has become increasingly difficult with the infectious Omicron variant.

But as new infections have slowed Shanghai has cautiously eased restrictions, with some factories resuming operations and residents in lower-risk areas allowed to venture outdoors. 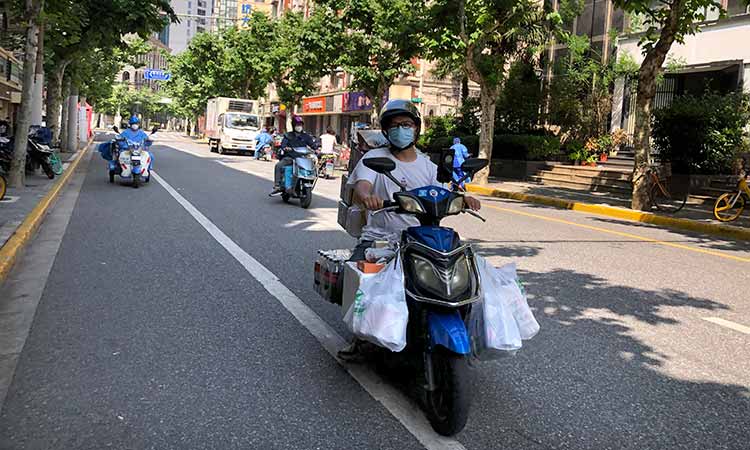 Four of the city's 20 subway lines will restart on Sunday along with some road transport, officials announced this week, forming a "basic network covering all central urban areas."

Those who take public transport will have to show a negative Covid test within 48 hours and have a "normal temperature", they added on Saturday.

But despite broader attempts to ease curbs, the central Jing'an district returned to a lockdown on Sunday, according to an official notice.

Jing'an will undergo three consecutive rounds of mass Covid tests starting Sunday and residents are not to leave their homes during this period, a WeChat notice said.

"'Exit permits' that have been issued will be suspended," the notice added on Saturday, while assuring residents that "victory is not far away".

The city of 25 million residents reported more than 600 Covid cases on Sunday, 570 of them asymptomatic, according to National Health Commission data. 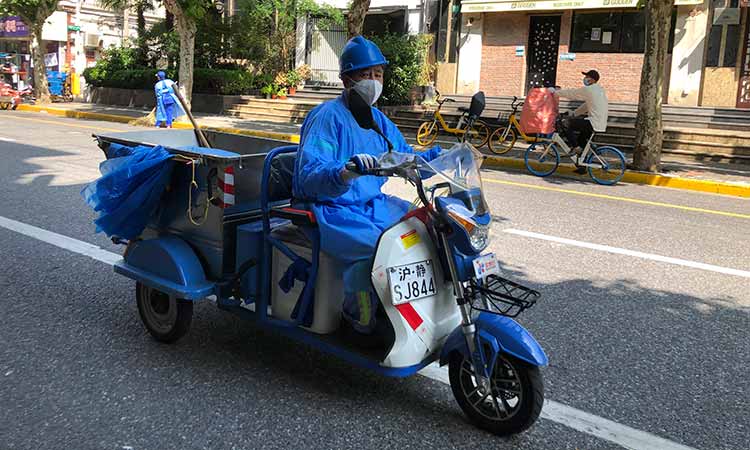 A worker wearing a face mask and protective gown drives a cart along a street in Shanghai on Saturday. AP

But restrictions continued in other Chinese cities with Covid cases, including in the capital Beijing, which has already banned dining out and forced millions to work from home.

As of Saturday, nearly 5,000 people in Beijing's Nanxinyuan residential compound had been relocated to quarantine hotels after 26 new infections were discovered in recent days, state media reported.

Fears have run high that the city may take a similar approach to Shanghai, where the lockdown has denied many adequate access to food and medical care. 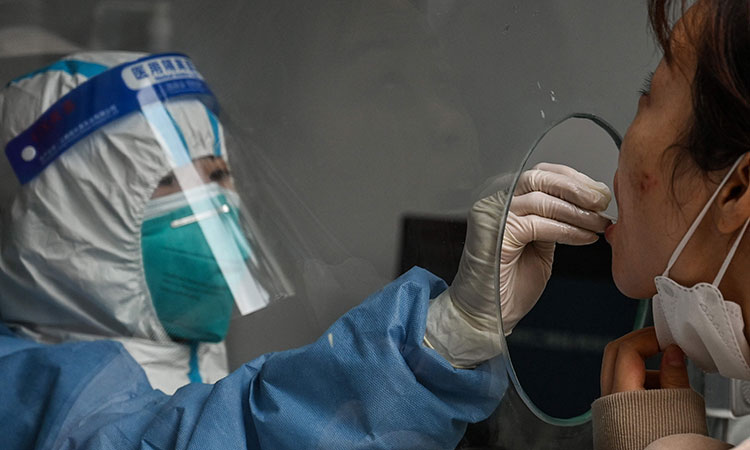 That compared with 5,656 new asymptomatic cases and 326 new cases with symptoms reported a day earlier. Shanghai on Sunday announced a two-stage lockdown of the city of 26 million people to carry out COVID-19 testing. 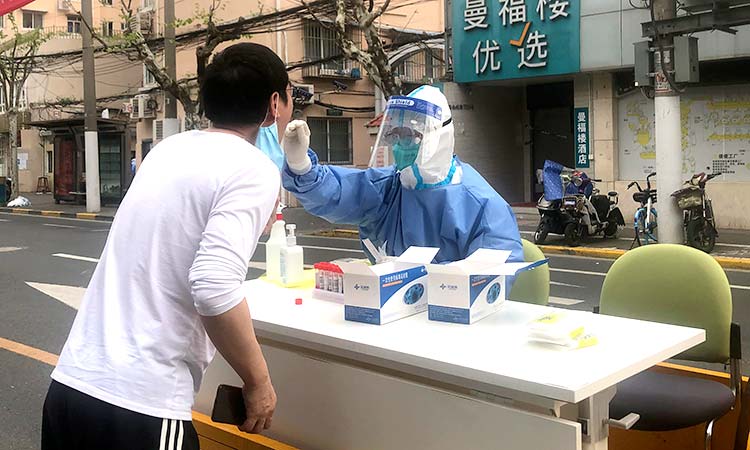 COVID-19: China’s Shanghai to lift lockdown in some areas

China's financial hub of Shanghai continued to report a spike in cases, with companies in the country struggling to maintain output amid stringent curbs. 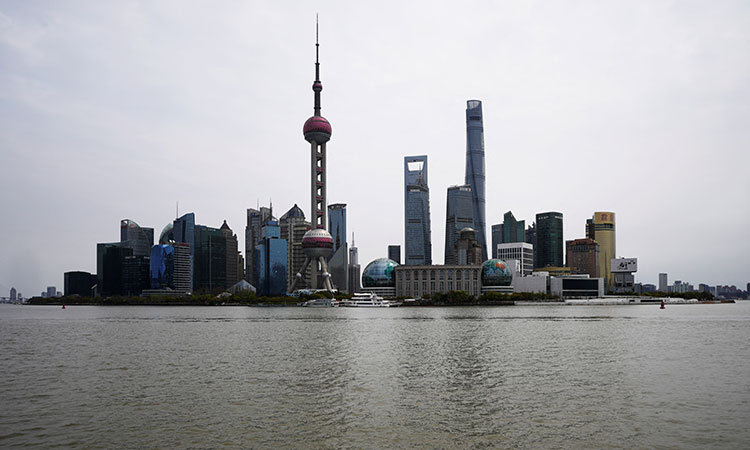 The snap lockdown, announced by Shanghai's city government on Sunday, will split the city in two roughly along the Huangpu River for nine days to allow for "staggered" testing. It is the biggest COVID-related disruption to hit the city. 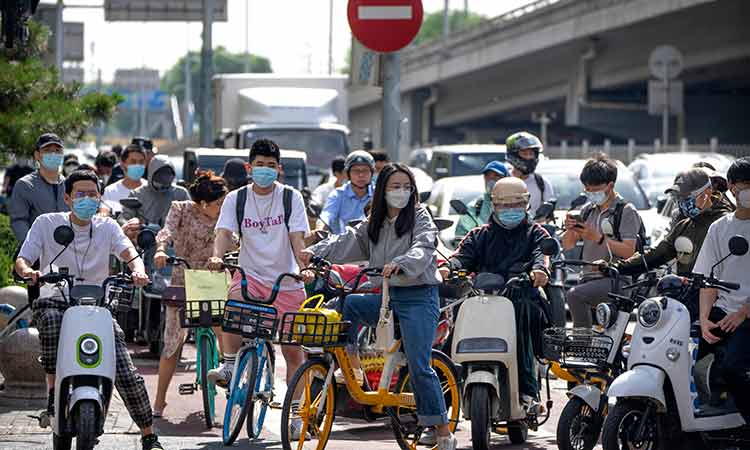 Relief and disbelief as Shanghai to start lifting COVID lockdown

Most will be stuck indoors again until midnight, as they have been for the past two months under a ruthlessly enforced lockdown that has caused income losses, stress and despair to millions struggling to access food or get emergency healthcare.