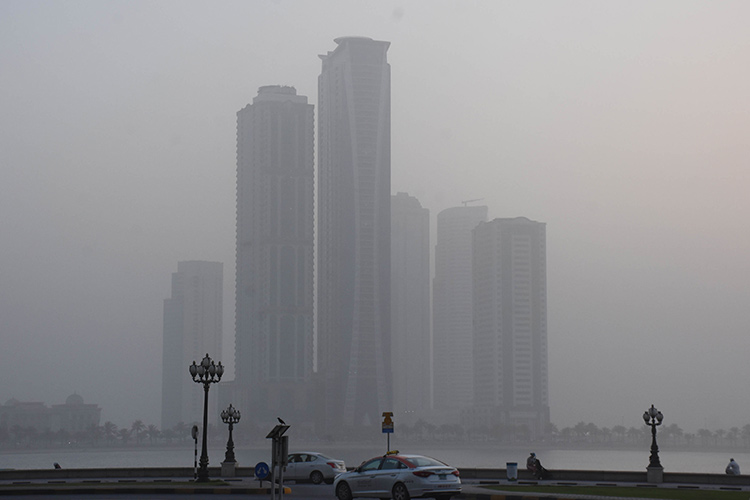 People walk along the Sharjah waterfront during a sandstorm on Tuesday. John Varughese / Gulf Today

Residents in the UAE woke up to a dust-blanketed morning on Wednesday as a massive sandstorm affected several areas of the state, prompting authorities to issues weather and traffic alerts.

The lowest temperature recorded over the country on Wednesday was 18.7 °C in Raknah (Al Ain) at 06:15 UAE local time.


Sharjah Police urged motorists to drive cautious as duststorms reduced visibility in several areas.
The police said, “We remind drivers to be careful while driving due to dust formation and dust accumulation, by leaving sufficient distances between vehicles, reducing speed, and being careful to handle the road with caution...”

The dusty and dust-inducing winds started on Tuesday from 09:30 in the morning in Abu Dhabi.

The weather all around the UAE has warmed up in the last couple of days, changing the cool mornings to somewhat sunny ones. 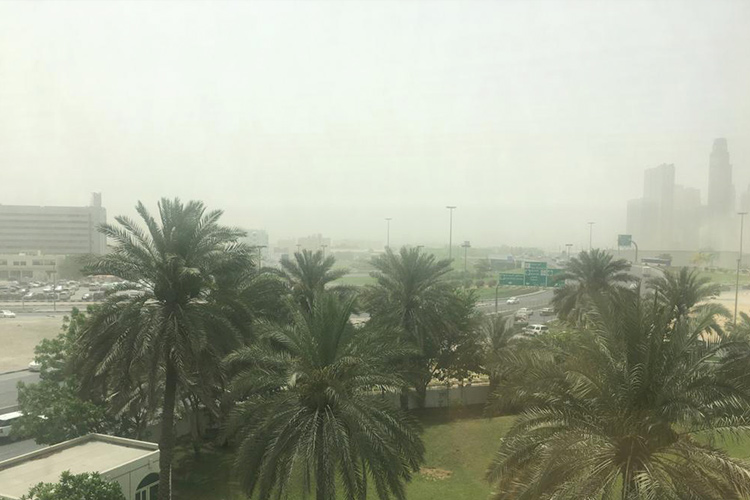 A duststorm reduces visibility in Sharjah.

The weather authorities said that the country is currently under the effect of the Red Sea depression accompanied by a surface depression extending from west to east leading to increase of cloud formation over some northern, eastern and inland parts in the country.

Saudi Arabia on Tuesday became the latest country blanketed with dust that slowed traffic and made iconic towers in the capital difficult to see from more than a few hundred metres away.

Electronic signs along Riyadh's highways warned drivers to reduce their speed because of the lower visibility, even as life largely went on as usual in the kingdom.

The National Meteorology Centre predicted that "surface dusty winds" originating in the east and bringing a thick grey haze would continue west towards the Muslim holy cities of Makkah and Madinah.

In central Riyadh on Tuesday, sand layered cars and buildings, and residents struggled to keep it out of their homes.

"Working outside is very difficult because of the dirt," a Pakistani construction worker who gave his name as Kalimullah told reporters as he installed tiles.

"I try to wash my face from time to time," the 30-year-old added, wrapping a piece of cloth around his face to block the sand.

"Dust storms are part of our culture and we are used to it, but some of them are severe," he said, rubbing his eyes as he hurried inside. 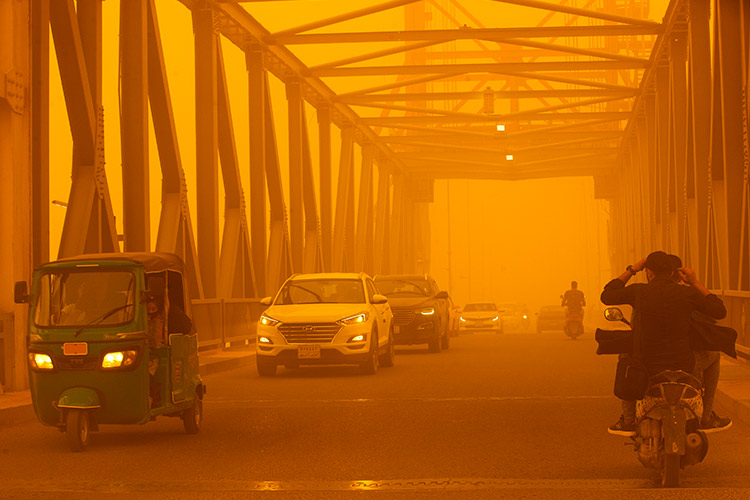 People navigate through a street during a sandstorm in Basra, Iraq, on Monday.  AP

The country's latest sandstorm on Monday enveloped the capital Baghdad in an orange glow, sent at least 4,000 people to hospital with breathing problems and led to the closure of airports, schools and public offices across the country.

The merchants in the capital who did not heed public warnings on Monday to stay indoors because of poor weather conditions, lamented financial losses and hardship amid ongoing economic woes.

There have been at least eight sandstorms in Iraq since April, according to officials.

They have landed thousands of Iraqis in hospitals with severe breathing difficulties and at least one person died, according to Iraq’s Health Ministry, which declared a state of emergency.

Iran announced that it, too, was closing government offices and schools on Tuesday, citing "unhealthy weather" conditions and sandstorms.

Average airborne concentration of the finest and most hazardous particles (PM2.5) was at 163 microgrammes per cubic metre Tuesday in Tehran, according to a government website. 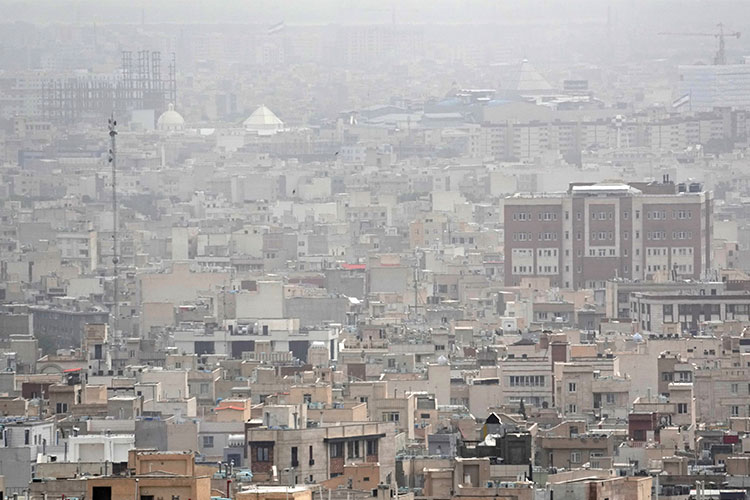 That is more than six times the World Health Organisation's recommended maximum of 25 microgrammes per cubic metre.

Schools and government offices closed in the Iranian capital on Tuesday and elsewhere in the country after yet another sandstorm blanketed Tehran, state TV reported.

The report said the air quality was very poor and that the pollution from the dust was high. It was the third severe sandstorm in Iran since mid-April.

Last week, authorities also shuttered schools in Tehran and other provinces because of a similar sandstorm but Tuesday marks the first time government offices closed in Tehran due to a sandstorm.

On Monday, airports in western Iran saw dozens of flights cancelled or delayed.

In Kuwait, meanwhile, air traffic at the main airport was suspended for an hour and a half due to a dust storm on Monday, and marine traffic in all three ports remained suspended as of Tuesday afternoon.
Kuwait's ministry of education said classes were suspended on Tuesday but would resume the following day.

In Syria, at least three people died along the border with Iraq because of the storm.
Experts blame poor government policies, desertification and low water levels as well as climate change for the frequency and intensity of recent sandstorms. 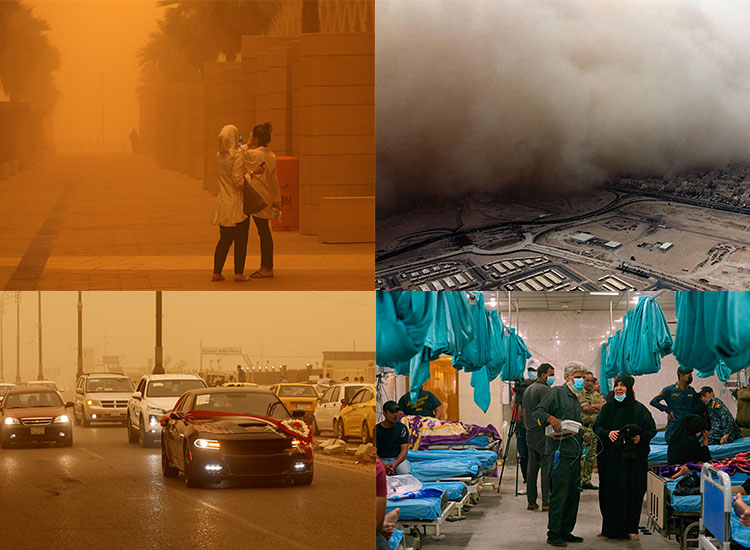 A sandstorm blanketed parts of the Middle East on Monday, including Saudi Arabia, Kuwait, Iraq, Syria and Iran, sending people to hospitals and disrupting flights in some places.