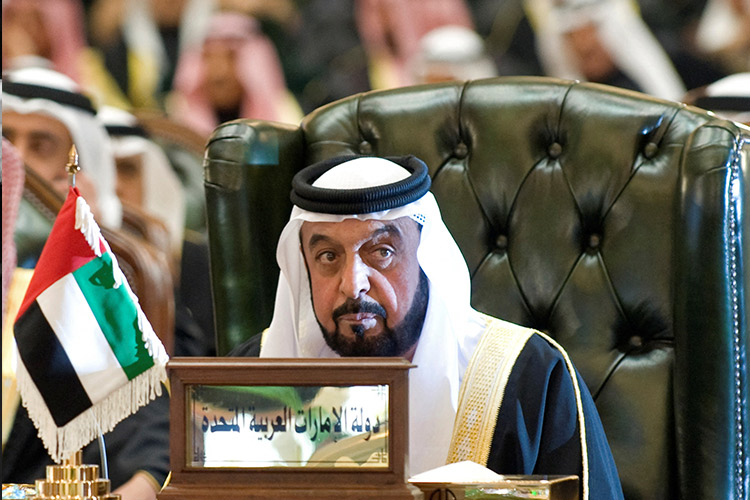 "The Ministry of Presidential Affairs condoles the people of the UAE and the Islamic world... on the passing of Sheikh Khalifa Bin Zayed Al-Nahyan on Friday, May 13," the official WAM news agency said.

Sheikh Khalifa has launched several initiatives and decisions, aiming to improve the quality of life and achieve the nation's highest priorities and development goals. The initiatives include:

The Sheikh Khalifa Excellence Award (SKEA) was launched by Abu Dhabi Chamber of Commerce & Industry (ADCCI) back in 1999 as a blue print, a roadmap and a methodology for continuous improvement aimed at enhancing the competitiveness of the business sector in the UAE.

In 2007, Sheikh Khalifa established Khalifa Bin Zayed Al Nahyan Foundation. Its vision is: pioneering initiatives for welfare and its strategies are focused on health and education on domestic, regional and global scales.

The Khalifa Award for Education being awarded since around 2007 aims to promote education, encourage outstanding educators and enhance innovative education practices. The award is intended to discover successful individuals and educational practices at the local, regional and Arab world levels.

Sheikh Khalifa ordered the establishment of the debts settlement fund on 2 December 2011, the occasion of the 40th National Day with an initial allocation of AED 10 billion, to help heavily indebted Emiratis settle their loans.

In 2014, the number of beneficiaries whose debts were dropped amounted to 3,482 citizens and the total value of the waived amount touched AED 1.5 billion.

The beneficiaries fell under the category of 'committed to pay' in addition to the cases of social security, health disability or special needs and a number of humanitarian cases.

-How does the Debt Settlement Fund work?

Banks write off half of the outstanding amount and the other half is bailed out by the government. Banks then collect the money from their customers and pass it back to the government. Those who are helped by the fund are banned from borrowing any more money from banks in the UAE until the obligation is settled.

Only Emiratis are eligible to apply if their loans are the subject of litigation brought before a specific date. An Emirati who has been taken to court by a bank before 2 December, 2011 can apply.

In 2012, Sheikh Khalifa ordered the rapid replacement of Emiratis' houses built before 1990 in the emirates of Sharjah, Ras Al Khaimah, Ajman, Umm Al Quwain and Fujairah. There were some 12,500 such housing units that met the replacement criteria and whose construction was estimated to be AED 10 billion.