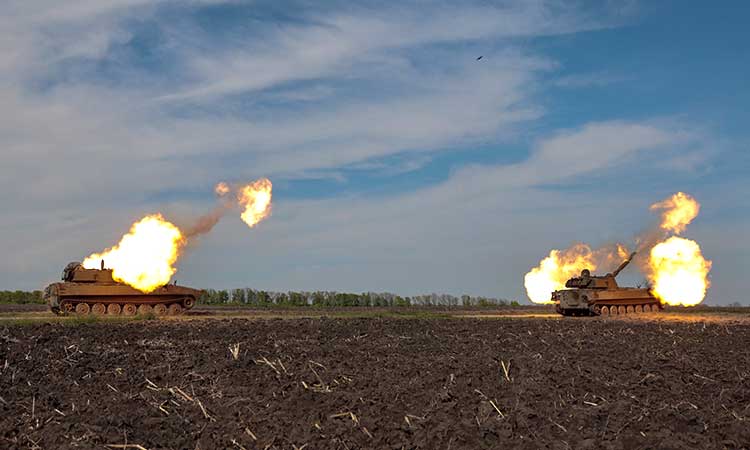 Ukraine's last soldiers in the port city of Mariupol face a brutal final showdown Sunday with besieging Russian forces, who are hoping to deliver a critical win ahead of the country's victory day.

President Volodymyr Zelensky is also set to hold talks with G7 leaders via video conference to discuss the situation in his country, which fears a renewed intensity to Moscow's offensive after the evacuation of civilians from Mariupol's Azovstal steelworks.

Meet the Ukrainian professor who teaches students from frontline trenches

Taking full control of Mariupol would allow Moscow to create a land bridge between the Crimean peninsula, which it annexed in 2014, and regions run by pro-Russian separatists in the east. 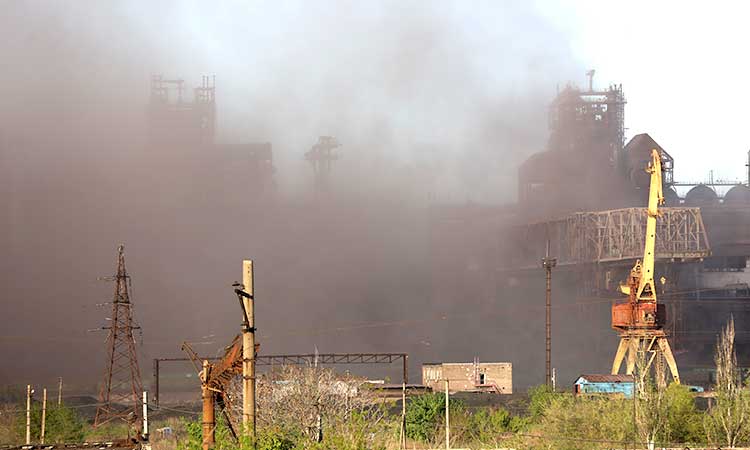 Smoke rises from the Metallurgical Combine Azovstal during shelling, in Mariupol, Ukraine, on Saturday. AP

"The enemy is trying to finish off the defenders of Azovstal, they are trying to do it before May 9 to give (Russian President) Vladimir Putin a gift," Oleksiy Arestovych, an aide to Ukraine's president, said.

Ukraine's far-right Azov battalion, leading the defence at the steelworks, said one of its fighters had been killed and six wounded when Russian forces opened fire during an earlier attempt to evacuate people by car.

Zelensky said hundreds of people had been removed from the plant Saturday and that preparations for another stage of evacuation comprising the wounded and medics were under way.

Civilians who have escaped have described passing through Russian "filtration" sites where several evacuees told AFP they were questioned, strip-searched, fingerprinted, and had their phones and documents checked. 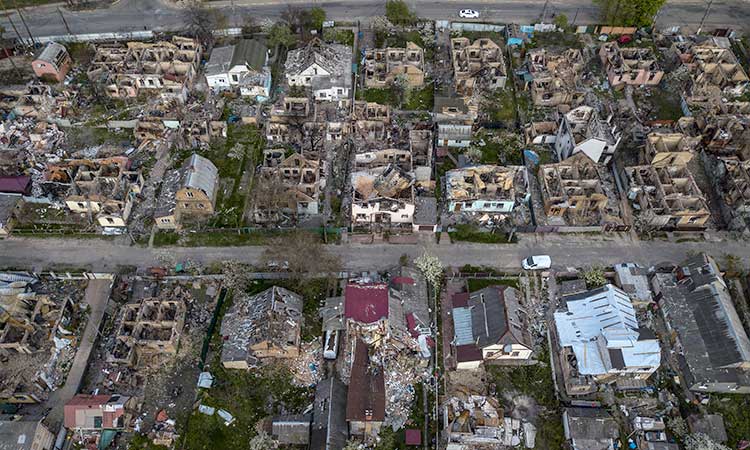 A destroyed residential area is seen after Russian shelling in Irpin, Ukraine, on Saturday. Reuters

"They asked us if we wanted to go to Russia or to stay in (eastern Ukraine's self-proclaimed Donetsk People's Republic) or stay and rebuild the city of Mariupol," said Azovstal evacuee Natalia, who spoke on condition that her full name not be published.

"But how can I rebuild it? How can I return there if the city of Mariupol doesn't exist anymore?"

Earlier, Kyiv's defence ministry said Russian forces had resumed their assault on the site, despite talk of a truce to allow trapped civilians to flee.

Russia's forces may be seeking to hand Putin a win ahead of Monday's Victory Day, when the country celebrates its 1945 defeat of Nazi Germany. 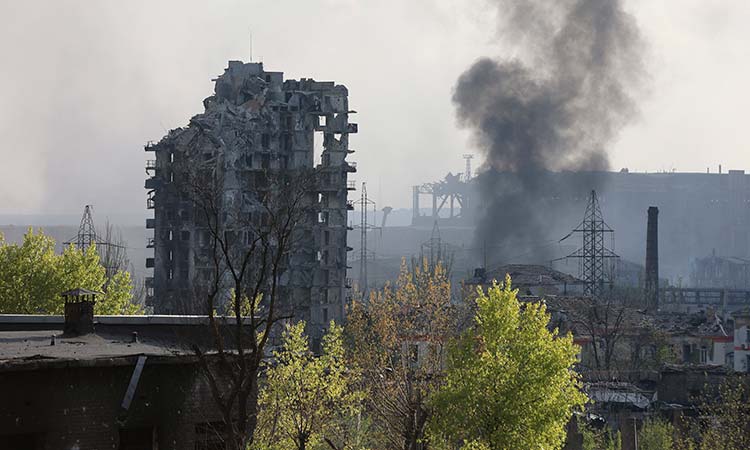 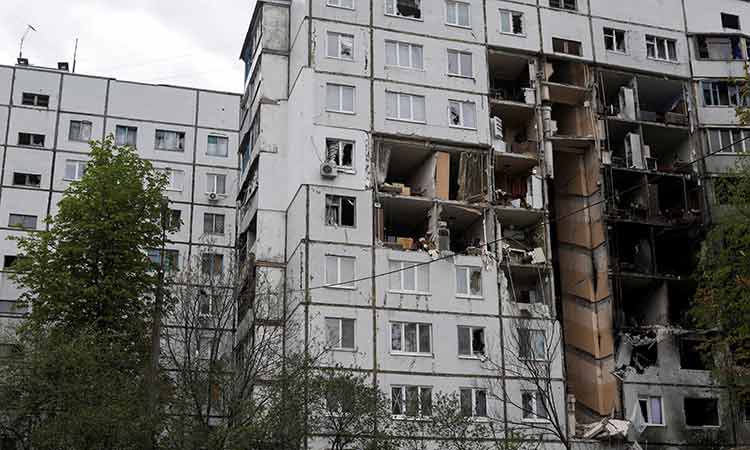 Oleh Synehubov, the head of Kharkiv’s regional administration, made the announcement Tuesday via a message on social media. Izyum is in the Kharkiv region. 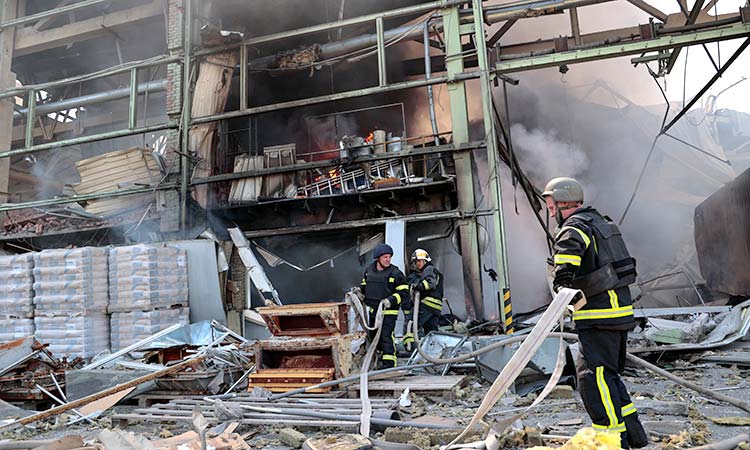 The governor of Luhansk warned that Ukrainian soldiers may have to retreat from Sievierodonetsk to avoid being surrounded. But he predicted an ultimate Ukrainian victory. 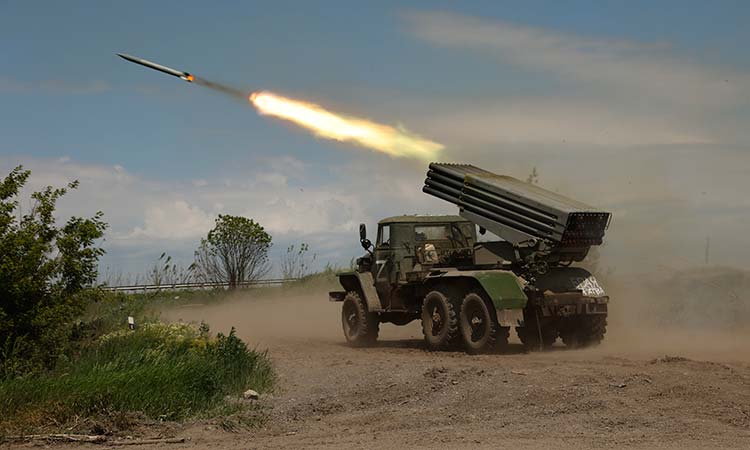 Nearly 40 miles (60 kilometres) to the east, Russian troops on Saturday sought to encircle Ukrainian defenders in the manufacturing center of Sievierodonetsk, where the fighting cut power and cellphone service and terrorised the civilians who hadn't fled.