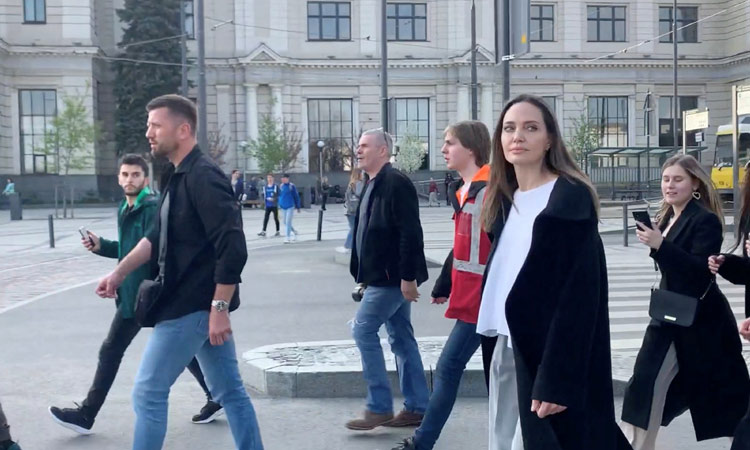 Footage has emerged of Angelina Jolie being taken to safety after an air-raid siren went off during her visit to the Ukrainian city of Lviv.

Lviv has been under attack from Vladimir Putin’s army in recent weeks. Earlier this month, a Russian missile attack on the western city left at least seven people dead.

While Jolie, a special envoy for the UN who has been doing humanitarian work for years, was visiting a refuge on Saturday (30 April), an air-raid siren went off and the actor could be seen quickly walking with an entourage, before getting into a car.

Jolie waved to the camera at one point and said, “I’m OK.”

Lviv’s regional governor Maksym Kozytsky said Jolie had come to speak with displaced people who have found refuge in Lviv, including children undergoing treatment for injuries sustained in the missile strike on the Kramatorsk railway station in early April.

“She was very moved by [the children’s] stories,’ Kozytsky wrote on social media. ‘One girl was even able to privately tell Jolie about a dream she’d had.’

He said Jolie also visited a boarding school where she talked with students and took pictures with them.

Earlier this week, Jolie was spotted getting coffee in Lviv and signing autographs.

The specifics of Jolie’s visit to Ukraine are not known, but in February, she posted on social media: “Like many of you, I’m praying for the people in Ukraine. My focus along with my @refugees colleagues is that everything possible is done to ensure the protection and basic human rights of those displaced, and refugees in the region.

“We have already seen reports of casualties and people starting to flee their homes to seek safety.

“It is too soon to know what will happen, but the significance of this moment – for the people of Ukraine, and for the international rule of law – cannot be overstated.”