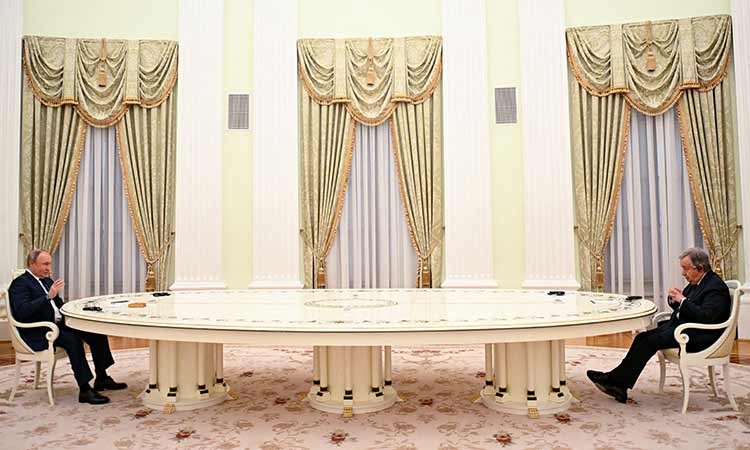 UN Secretary-General Antonio Guterres and Russian President Vladimir Putin met one-on-one on Tuesday for the first time since Russia invaded Ukraine, and the United Nations said they agreed on arranging evacuations from a besieged steel plant in the battered city of Mariupol.

UN spokesman Stephane Dujarric said the Russian leader and UN chief discussed "proposals for humanitarian assistance and evacuation of civilians from conflict zones, namely in relation to the situation in Mariupol.”

Guterres, Putin also agreed in principle, he said, that the United Nations and the International Committee of the Red Cross should be involved in the evacuation of civilians from the Azovstal steel complex where Ukrainian defenders in the southeastern city are making a dogged stand.

Discussions will be held with the UN humanitarian office and the Russian Defence Ministry on the evacuation, Dujarric said. 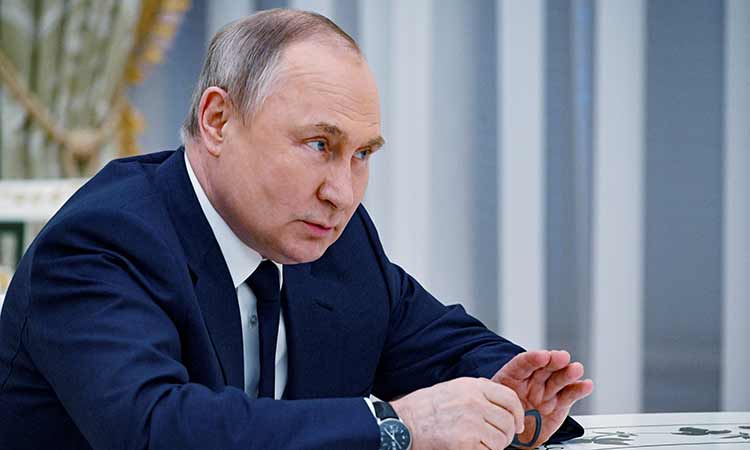 During the meeting, which the UN said lasted nearly two hours, Putin and Guterres sat at opposite ends of a long white table in a room with gold curtains bordered in red. No one else was at the table.

Russia this month accused Ukraine of attacking a fuel depot in Belgorod with helicopters and opening fire on several villages in the province.

The Belgorod province borders Ukraine's Luhansk, Sumy and Kharkiv regions, all of which have seen heavy fighting since Russia invaded Ukraine two months ago.

Separately, Roman Starovoyt, the governor of Russia's Kursk province, which also borders Ukraine, said that explosions had been heard in Kursk city early on Wednesday which were most likely the sounds of air defence systems firing. 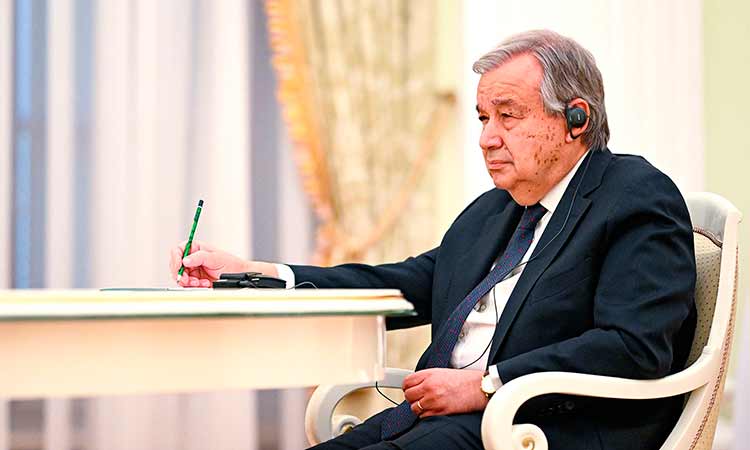 Antonio Guterres listens to Vladimir Putin during their meeting in Moscow, Russia, on Tuesday. AP

In Voronezh, the administrative centre of another province adjacent to Ukraine, Russia's TASS news agency cited an emergencies ministry official as saying that two blasts had been heard and the authorities were investigating.

Russia sent tens of thousands of troops into Ukraine on Feb. 24 in what it called a "special operation" to degrade its military capabilities and root out what it calls dangerous nationalists. Ukrainian forces have mounted stiff resistance and the West has imposed sweeping sanctions on Russia in an effort to force it to withdraw its forces.

On Saturday, a Ukrainian military unit released a video reportedly taken two days earlier in which women and children holed up underground in the plant, some for as long as two months, said they longed to see the sun.

Meanwhile, a series of blasts were heard in the early hours of Wednesday in three Russian provinces bordering Ukraine, authorities said, and an ammunition depot in the Belgorod province caught fire around the same time.

Belgorod regional governor Vyacheslav Gladkov said a fire at the ammunition depot near the Staraya Nelidovka village had been extinguished and no civilians have been injured.

Training his fire on Putin as he addressed the General Assembly, US President Joe Biden accused him of "shamelessly" violating the UN Charter with a war aimed at "extinguishing Ukraine's right to exist as a state."