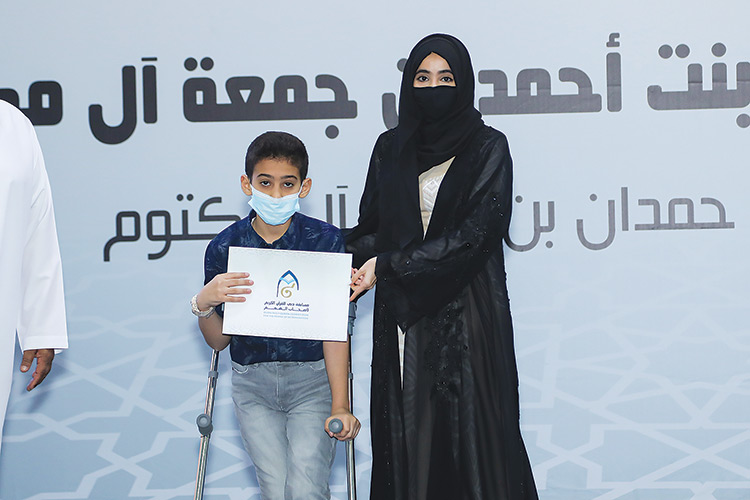 The Dubai Holy Quran Competition, considered as one of the largest and most important cultural competitions held during the Holy month of Ramadan, had 463 competitors from 57 different sectors participating this year.

The contestants memorised and recited the Noble Quran in the presence of Jameela Bint Salem Al Muhairi, Minister of State for Public Education, and Aisha Miran, Assistant Secretary-General for the Administration Sector Strategy and Governance in the General Secretariat of the Executive Council of the Emirate of Dubai and Thani Juma Berregard, Chairman of the Council Management of the Dubai Club for People of Determination, Majid Al Usaimi, Executive Director of the Club, and Azza Bint Suleiman, Secretary General Assistant for Administrative and Financial Affairs of the National Olympic Committee and a number of officials.

The winners are decided on the approach set by Sheikha Rawda Bint Ahmed Bin Juma Al Maktoum, the wife of the late Sheikh Hamdan Bin Rashid Al Maktoum, the patron of the event that seeks to spread the Qur’anic culture, link the categories of people of determination with the Holy Quran, and strengthen the spirit of competition.

PARTICIPANTS SHOWED EXCEPTIONAL WILL: Later, the closing ceremony began with verses from the Holy Quran by Muhammad Ihab Al-Najjar, and a documentary video.

This was followed by the presentation of an anthem by the contestant Muhammad Jawhar, while Noura Al-Zarouni presented a poem about Holy Quran competition to Sheikha Latifa Bint Hamdan Bin Rashid Al Maktoum.

The Department of Islamic Affairs and Charitable Activities in Dubai was honoured for their continuous support for the competition. Muhammad Al-Ghafli, head of the “People of Determination” team in the department, expressed his happiness on receiving the honour, and said Sheikha Latifa Bint Hamdan Bin Rashid Al Maktoum’s presence enriched the Ramadan Club Festival and increased its splendor and beauty amidst participation.

SHEIKHA LATIFA BINT HAMDAN’S VISIT APPRECIATION FOR ALL COMPETITORS: For his part, Majid Al-Usaimi thanked Sheikha Rawda Bint Ahmed Bin Juma Al Maktoum for her support in the competition and Sheikha Latifa Bint Hamdan Bin Rashid Al Maktoum for her interest and support for the “People of Determination” procession.

Al Usaimi also highlighted that her “Sheikha Latifa Bint Hamdan’s visit to the club and her honouring of the winners made everyone happy, and it’s a tribute and appreciation for all competitors in this special edition”.

Meanwhile, Berregad thanked Sheikha Rawda Bint Ahmed for her patronage of the annual competition that “aims to encourage people of determination to memorise the Book of Allah, contemplate its meanings, and discover new talents from God who have a beautiful voice, and rehabilitating our children of determination to keep pace with their peers.”

“The competition gives our children of People of Determination a motivation and inspiration to excel in all areas of life, in addition to obtaining a reward.

“The participants showed exceptional will to excel in a competitive Ramadan atmosphere.”

In the end, Berregad on behalf of the organising committee presented the souvenir of the competition to Sheikha Latifa Bint Hamdan Bin Rashid Al Maktoum. 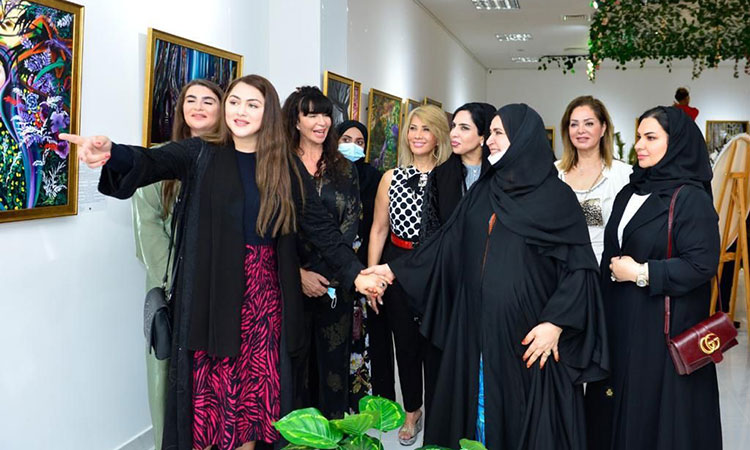 Dubai resident, Eniko Szabo (Noor Galadari), an impression and surrealistic artist, through her surreal paintings exhibition has proved herself a fresh breeze in local art scene.