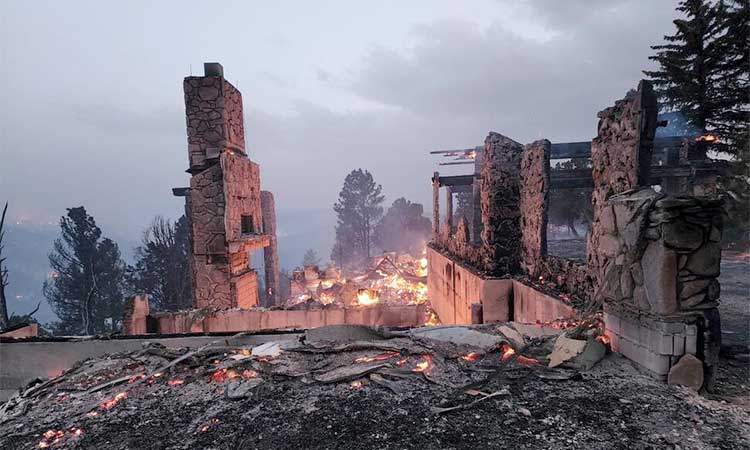 The remains of a home left after a wildfire spread through the Village of Ruidoso, New Mexico. AP

Douglas Siddens’ mother was among those who made it out with just the clothes on her back when a deadly, wind-fueled wildfire ripped through a mountain community in southern New Mexico.

The RV park where she lived was reduced to "metal frame rails and steel wheels,” said Siddens, who managed the site

"I had like 10 people displaced. They lost their homes and everything, including my mom,” he said.

The fire has destroyed more than 200 homes and killed two people since it broke out Tuesday near the village Ruidoso, a vacation spot that draws thousands of tourists and horse racing fans every summer.

Hundreds of homes and summer cabins dot the surrounding mountainsides. The RV park that Siddens managed is near where an elderly couple was found dead this week outside their charred residence.

Elsewhere in the US, crews have been battling large fires this week in Texas, Oklahoma and Colorado, where a new blaze forced evacuations Friday along the Rocky Mountain's eastern front near Lyons about 18 miles (29 kilometres) north of Boulder.

That fire was burning in the Blue Mountains near the Larimer-Boulder county line about 20 miles (32 kilometers) southeast of Estes Park, the east entrance to Rocky Mountain National Park. 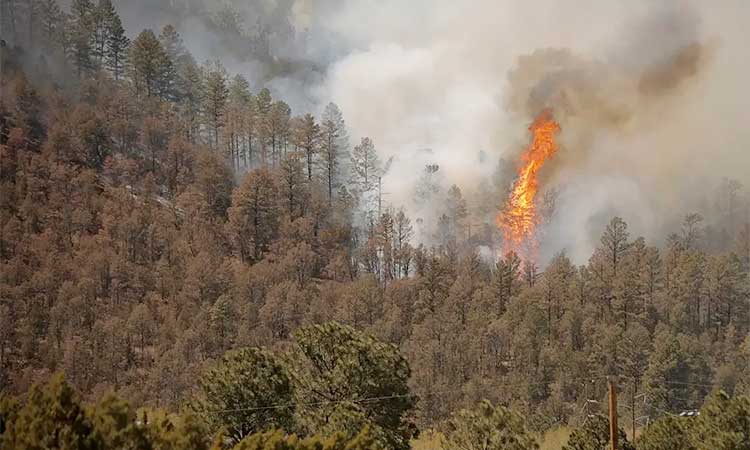 Firefighters tried to keep wind-whipped flames from making another run at the village.


In New Mexico, power was restored to all but a few hundred customers, but evacuation orders for close to 5,000 people remained in place.

Donations poured in from surrounding communities all too familiar with just how devastating wildfires can be.

It was a decade ago that fire ripped through part of the village of Ruidoso, putting the vacation spot on the map with the most destructive wildfire in New Mexico’s recorded history when more than 240 homes burned and nearly 70 square miles (181 square kilometres) of forest were blackened by a lightning-sparked blaze.

On Friday, Mayor Lynn Crawford was rallying heartbroken residents once again as firefighters tried to keep wind-whipped flames from making another run at the village. She said the response from their neighbors has been amazing.

"So we have plenty of food, we have plenty of clothes, those kinds of things but we still appreciate and need your prayers and your thoughts,” the mayor said during a briefing. "Again, our hearts go out to the family of the deceased, to those that have lost their homes.”

Authorities have yet to release the names of the couple who died. Their bodies were found after worried family members contacted police, saying the couple had planned to evacuate Tuesday when the fire exploded but were unaccounted for later that day.

While many older residents call Ruidoso home year round, the population of about 8,000 people expands to about 25,000 during the summer months as Texans and New Mexicans from hotter climates seek respite. 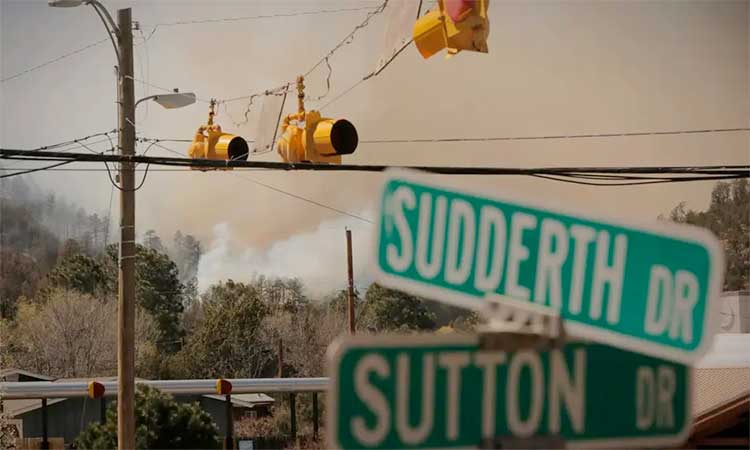 New Mexico authorities said they suspect the fire was sparked by a downed power line.


Fans also flock to Ruidoso Downs, home to one of the sport’s richest quarter-horse competitions. The racing season was expected to start May 27, and horses that board there aren’t in any danger as fire officials use the facility as a staging ground.

Part-time residents have taken to social media over the last few days, pleading with fire officials for updates on certain neighborhoods, hoping their family cabins weren’t among those damaged or destroyed.

The hotlines lit up Friday afternoon as people in the village called in to report more smoke. Fire information officer Mike DeFries said that was because there were flare-ups within the interior of the fire as the flames found pockets of unburned fuel.

While the fire didn’t make any runs at the lines crews had established, he said it was still a tough day for firefighters due to single-digit humidity, warmer temperatures and the wind.

Authorities reiterated that it was still too early to start letting people in to see the damage. They asked for patience as fire crews put out hot spots and tried to build a stronger perimeter around the blaze.

"It’s still an active fire area in there and it’s not a safe place,” DeFries said. "It’s going to require patience. At the same time, every step that we’re taking is designed to suppress this fire and to get people back home as soon as possible.”

New Mexico authorities said they suspect the fire, which has torched more than 9.5 square miles (24 square kilometres) of forest and grass, was sparked by a downed power line and the investigation continued Friday.

Hotter and drier weather coupled with decades of fire suppression have contributed to an increase in the number of acres burned by wildfires, fire scientists say. The problem is exacerbated by a more than 20-year Western megadrought that studies link to human-caused climate change.