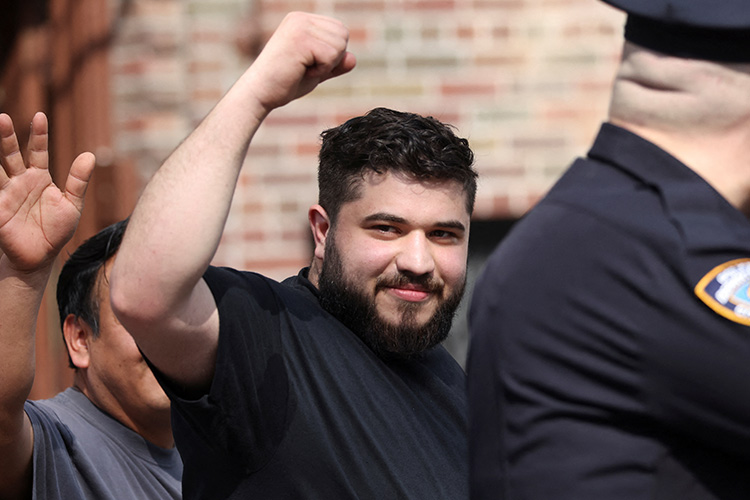 A 21-year-old Syrian man, who played a role in the capture of the suspected Brooklyn subway shooter on Wednesday, won hearts after he described how he saw Frank James through one of the security cameras and followed him.

Zack Tahhan, who moved from Syria to the US five years ago, recognised the alleged shooter while he was fixing a camera outside a convenience store in the East Village in Manhattan.

He was hailed as a hero — with #Thankyouzack trending on Twitter — after he followed the man and alerted police officers.

Crowds of people gathered around Tahhan on Wednesday as reporters asked him to describe how he recognised 62-year-old Frank James. He took the microphone from a reporter and proceeded to give an account of his experience in what is being described as an impromptu press conference.

Tahhan said: “I was working inside the store and I was doing security cameras inside and I see the guy, he was walking from the street, and I see him [on] the cameras.”

He said he ran onto the street and followed the suspect while warning everyone around him to keep their distance. The owner of the convenience store, meanwhile, called 911, he said.

“People think I am crazy, like maybe I am on drugs. But I’m not. I’m fasting,” he said, referring to the fast that many Muslims around the world keep to observe Ramadan.

The people with him said they looked at the photo on their phones to check whether the person they spotted was the suspect.

Prior to Tanhan spotting him, James himself called in the police saying he was at a McDonald’s. But he left before the police arrived.

He was later grabbed by three police officers on First Avenue without putting up a fight after visiting a nearby McDonald’s and strolling down the street.
James faces federal terror charges over Tuesday’s attack on subway riders in Sunset Park which left 10 people with gunshot wounds and a further 18 injured.

It is not yet confirmed if Tanhan’s actions led to James’s arrest. But he was cheered and clapped by onlookers as he was taken in the police car for the investigation.

Many sounding off on social media demanded that police give Tanhan the $50,000 reward offered for information leading to the subway shooter’s capture.

Concord police responded to a call about a fight outside a Dave and Buster's at Concord Mills mall on Saturday night, police said in a statement.