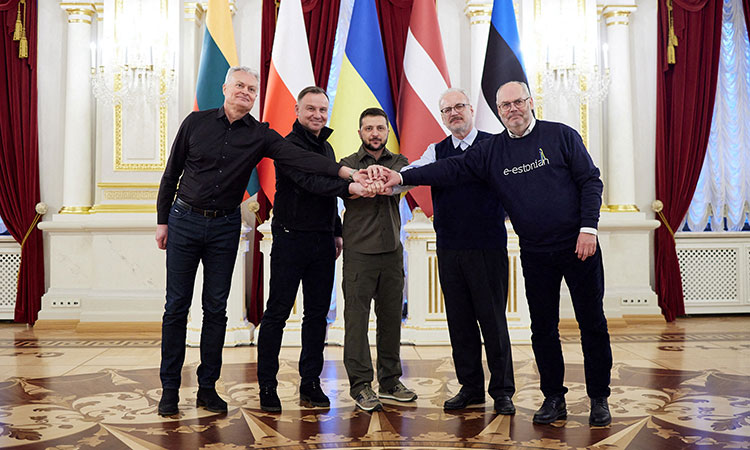 The presidents of four countries on Russia’s doorstep toured war-ravaged areas near the Ukrainian capital and demanded accountability for what they called war crimes, as Kyiv and Moscow gave conflicting accounts of what happened to a badly damaged missile cruiser that is the flagship vessel of Russia’s fleet in the Black Sea.

The visit by the presidents of Poland, Lithuania, Latvia and Estonia was a strong show of solidarity from the countries on NATO’s eastern flank, three of them like Ukraine once part of the Soviet Union.

The leaders travelled by train to the Ukrainian capital, Kyiv, to meet with their counterpart Volodymyr Zelensky, and visited Borodyanka, one of the nearby towns where evidence of atrocities was found after Russian troops withdrew to focus on the country's east. 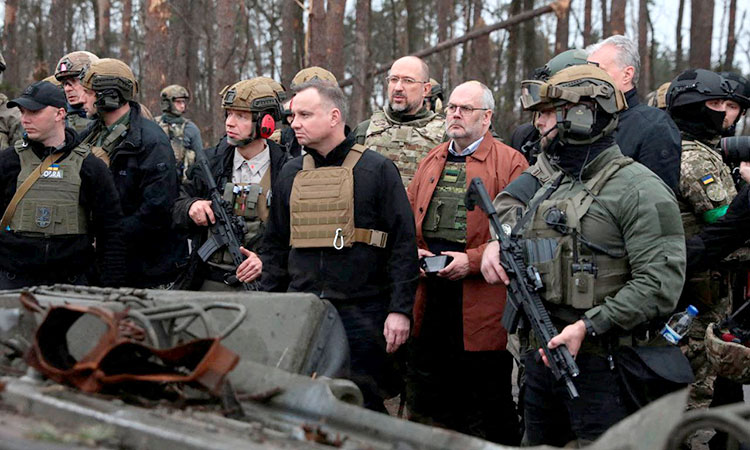 "The fight for Europe’s future is happening here,” Lithuanian President Gitanas Nauseda said, calling for tougher sanctions, including against Russian oil and gas shipments and all the country’s banks.

Meanwhile, Germany's president did not join them as he had planned. Zelenskiy denied a newspaper report he had rejected the visit due to Steinmeier's recent good relations with Moscow.

Elsewhere, in one of the most crucial battles of the war, Russia said more than 1,000 Ukrainian troops had surrendered in the besieged southern port city of Mariupol, where Ukrainian forces have been holding out in pockets of the city. A Ukrainian official denied the claim, which could not be independently verified.

And in the Odesa region, Gov. Maksym Marchenko said Ukrainian forces struck the guided-missile cruiser Moskva - the flagship of Russia’s Black Sea Fleet - with two missiles and caused "serious damage.” Russia's Defense Ministry confirmed the ship was damaged but not that it was hit by Ukraine - it said ammunition on board detonated as a result of a fire of as-yet undetermined causes. The entire crew was evacuated, it added; the cruiser typically has about 500 on board. 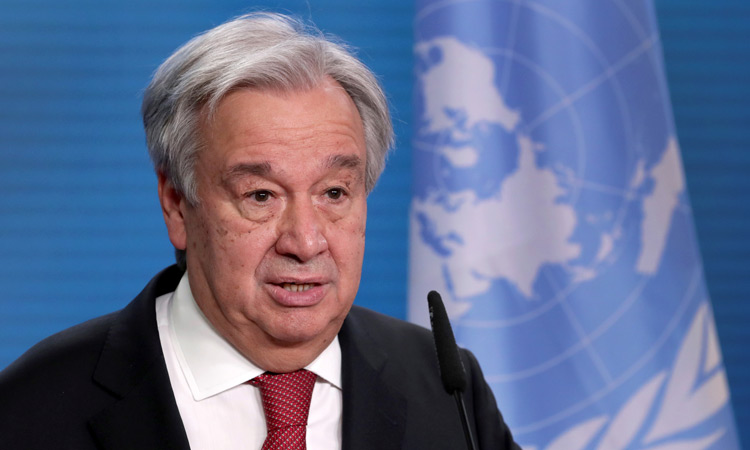 UN Secretary-General Antonio Guterres said there is no chance at the moment for a humanitarian cease-fire in Ukraine, as the world body was seeking.

The detention of fugitive Ukrainian oligarch Viktor Medvedchuk, the former leader of a pro-Russian opposition party and a close associate of Putin, was being met with enthusiasm in Kyiv and irritation in Moscow. Analysts say Medvedchuk, detained Tuesday in an operation by Ukraine's state security service, could become a valuable pawn in Russia-Ukraine talks on ending the war. Zelensky has proposed that Moscow could win Medvedchuk’s freedom by releasing Ukrainians now held captive.