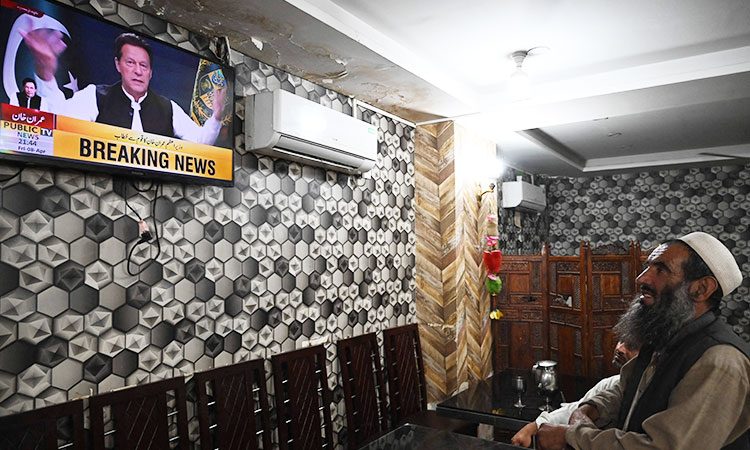 People listen to Imran Khan addressing the nation on television at a restaurant in Islamabad on Friday. AFP

Pakistan Prime Minister Imran Khan said on Friday he would not recognise an opposition government if it succeeded in an attempt to oust him, the latest twist in a political crisis engulfing the nuclear-armed nation.


The country's parliament will convene on Saturday to vote on Imran as prime minister, an official notice said on Friday, potentially cutting short his term as leader.

The country's top court ruled late on Thursday that Imran must face the no-confidence vote, which he is widely expected to lose, meaning he would be ousted from office.

During his address to the Parliament in Pakistan, Imran said, “India is very proud of themselves. No superpower can dictate terms to them.”

A session of the lower house of parliament has been called for 10:30am on Saturday, the speaker's office said in an order paper. The vote, brought by the opposition leader Shahbaz Sharif, is the fourth point on the agenda.

A former cricket star who took office in 2018, Imran said he was disappointed but accepted the Supreme Court (SC) ruling that he had acted unconstitutionally in blocking the no-confidence vote when it was due to take place last Sunday, after which he dissolved parliament and called an election.

He said he would not recognise any opposition government that replaced him. "I will not accept an imported government," he said in a late-night address, suggesting the move to oust him was part of a foreign conspiracy and calling for peaceful protests on Sunday. "I'm ready for a struggle."

The crisis has threatened political and economic stability in the country of 220 million people, where the military has ruled for half its history.

Imran, who opposed the US-led intervention in Afghanistan and has developed relations with Russia since becoming prime minister, has accused the United States of supporting a plot to oust him. Washington has dismissed the accusation.

If he loses the no-confidence vote, the opposition will put forward a candidate for prime minister.

Shahbaz Sharif, the younger brother of three-time former prime minister Nawaz Sharif, said after the court ruling that the opposition had nominated him to take over should Imran Khan be ousted.

But markets opened higher on Friday on investor hopes the crisis might be easing. The Pakistan Stock Exchange was up 680 points, or 1.5%, and the rupee had rebounded from historic lows.

"The court decision will end political uncertainty and constitutional crisis to a large extent. This will help restore some confidence in the markets," Muhammad Sohail of Karachi-based Topline Securities told Reuters.

"However economic challenges remain and it will be interesting to see how a new set-up takes bold steps to put things in order," he added.

The 2029 issue dropped more than 1 cent to 88.6 cents on the dollar while shorter-dated issues traded around the mid-70s cents, Tradeweb data showed. The country's bonds had traded close to par of 100 cents at the start of the year.

The opposition has said it wants early elections but only after delivering Khan a political defeat and passing legislation that it says is needed to ensure the next polls are free and fair.

The election commission has said the earliest it can hold elections is in October, which means any new government will have to deal with pressing economic issues before that. 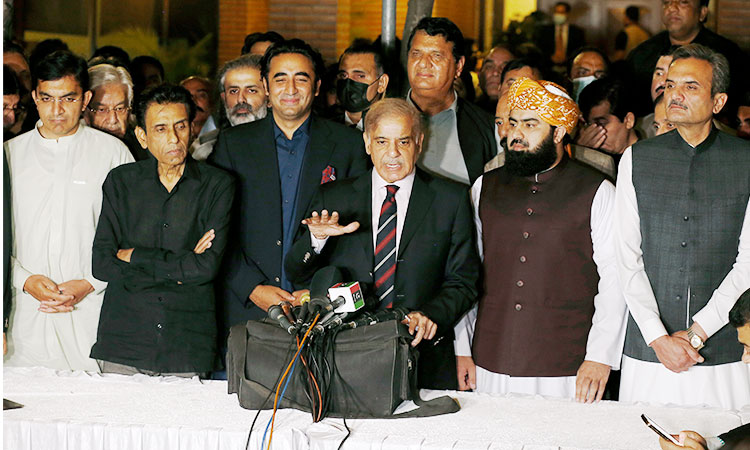