Russia ‘bombs theatre’ in Mariupol where over 1,000 people were sheltering - GulfToday 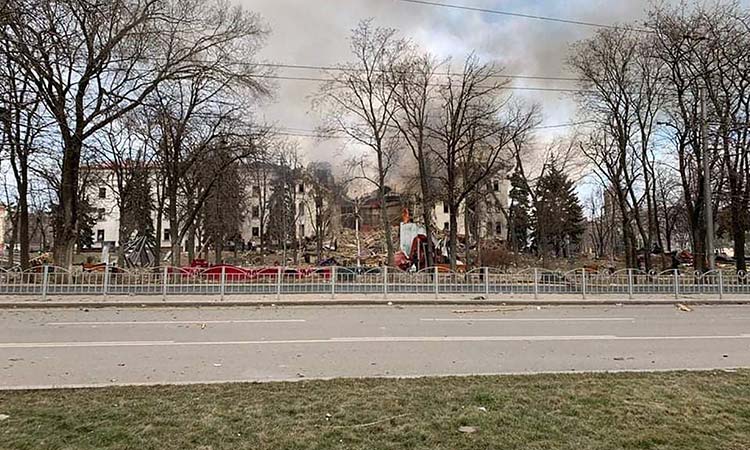 Damaged vehicles sit among debris and in Kharkiv city centre in Ukraine, on Wednesday. AP

Ukrainian officials in Mariupol say a theatre where more than 1,000 of its residents were sheltering has been bombed by Russia.

International outrage over Russia's invasion of Ukraine grew on Thursday as US and Ukrainian officials said Russian forces had killed civilians waiting in line for bread and sheltering in a theatre.

Local authorities said Russian forces also took hundreds of people hostage at a Mariupol hospital and were using them as human shields. Bodies have been buried in trenches across the city and corpses lay in the streets.

Nearly 6,500 people have fled Mariupol on Wednesday, March 16, according to the Kviv Independent.

In a sign of growing anger, Putin lashed out at “scum and traitors” in Russia who he accused the West of using as a “fifth column” to destroy his country. 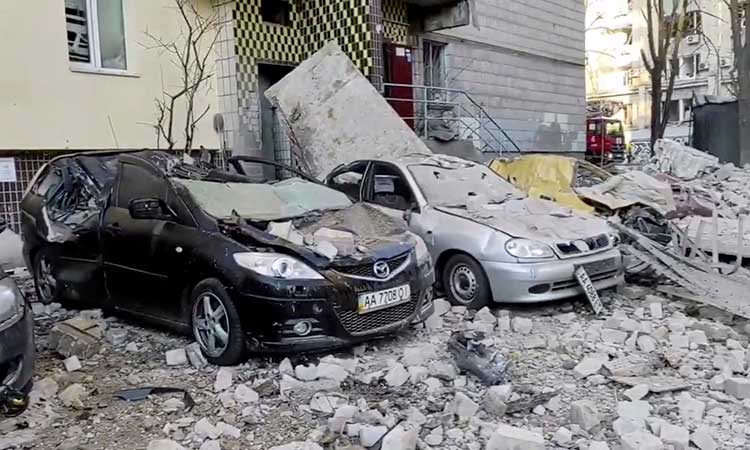 A view shows damaged vehicles covered in debris after a residential building was hit by shelling in Kyiv. Reuters

“Of course they [the West] will try to bet on the so-called fifth column, on traitors – on those who earn their money here, but live over there. Live, not in the geographical sense, but in the sense of their thoughts, their slavish thinking,” Putin said.

“The collective West wants to divide our society ... to provoke civil confrontation in Russia and to use its fifth column to strive to achieve its aim. And there is one aim – the destruction of Russia,” he said in a televised address.

Joe Biden has told reporters in the East Room of the White House that he believes Russian President Vladimir Putin is a war criminal over his invasion of Ukraine.

The US president’s comments came on the same day Ukraine’s president addresses US Congress in an historic call. 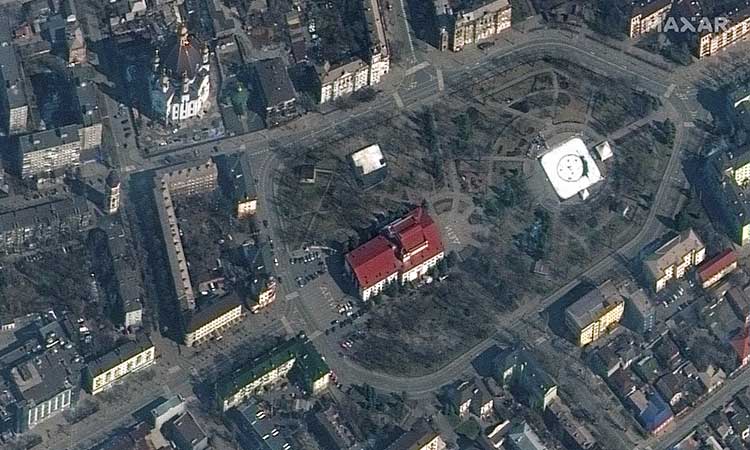 A satellite image shows Mariupol Drama Theatre before bombing, as the word "children" in Russian is written in large white letters on the pavement, in front of and behind the building, in Mariupol, Ukraine. Reuters

Meanwhile, Russian troops have released Ivan Fedorov, mayor of the Ukrainian city of Melitopol, an adviser to the Ukrainian president has said.

Fedorov was reportedly kidnapped by Russian soldiers on Friday night, marched from his office in the centre of Melitopol with a bag over his head.

International outrage over Russia's invasion of Ukraine grew on Thursday as US and Ukrainian officials said Russian forces had killed civilians waiting in line for bread and sheltering in a theatre.

Kremlin forces kept up their bombardments of besieged cities, including intensified shelling of the capital Kyiv, and civilians waiting in line for bread and sheltering in a theatre were killed, according to US and Ukrainian officials. 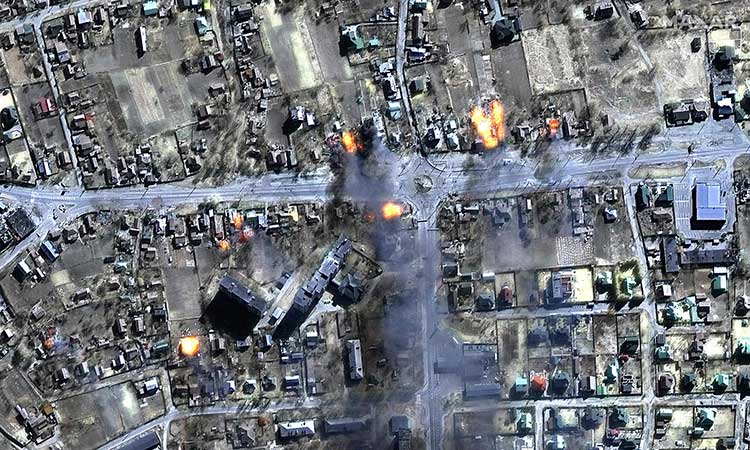 Moscow has yet to capture any of Ukraine's biggest cities despite the largest assault on a European state since World War Two. More than 3 million Ukrainians have fled and thousands have died as the war enters its fourth week.

In the capital Kyiv, at least one person died and three were wounded when a residential building was struck by a downed Russian missile emergency services said on Thursday.

Putin on Wednesday said he would discuss neutral status for Ukraine and that what he calls a "special military operation" to demilitaris the country was "going to plan". Kyiv and allies say his actions are an unprovoked incursion, and more than 3 million Ukrainians have fled and hundreds have died.

Ukraine's foreign ministry said on Wednesday Russian forces dropped a powerful bomb on a theatre in the besieged southern port city of Mariupol, leaving many civilians trapped and an unknown number of casualties. Reuters could not independently verify the information.

Maxar Technologies, a private US company, distributed satellite imagery it said was collected on March 14 and showed the word "children" in large Russian script painted on the ground outside the red-roofed building.

"This raises serious concerns about what the intended target was in a city where civilians have already been under siege for days and telecommunications, power, water, and heating have been almost completely cut off," Belkis Wille from the rights group said.

The US Embassy in Kyiv said Russian forces had shot dead 10 people waiting in line for bread in Chernihiv, northeast of Kyiv. Russia denied the attack and said the incident was a hoax.