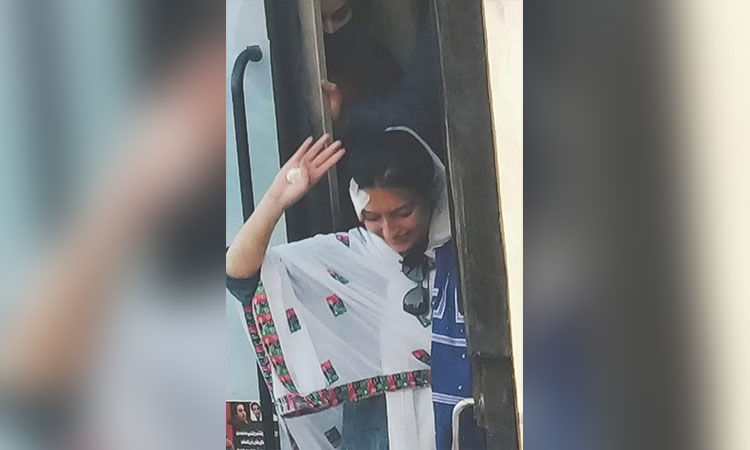 Aseefa Bhutto Zardari injured after getting hit by a drone camera during PPP march in Khanewal. Twitter photo

Aseefa Bhutto Zardari, the younger sister of Pakistan Peoples Party (PPP) Chairman Bilawal, was hurt on Friday after a drone camera accidentally hit her face during the PPP’s long march in Khanewal.

Aseefa was standing on the top of the container, designed to lead the PPP’s long march, along with other party leaders when a drone camera accidentally hit her face.

Resultantly, she sustained an injury on the forehead. She was taken down from the top of the truck and given medical aid.

The PPP chairman placed his “Ajrak” on the forehead of his sister. The security guards in the long march got a hold of the drone operator.
After getting the first-aid, Aseefa left for Multan for further treatment.

Addressing the workers after the incident, the PPP chairman praised the bravery of his sister and said: "Aseefa was injured after being hit by a drone, but she was resolutely determined. When she was asked to go to the hospital, she insisted on first-aid only.”

Bilawal said that he came late to the container because he was convincing his sister to go to the hospital.

Following the incident, a police investigation found that the drone camera was being operated from a private channel’s DSNG van.

Police said that except for two people, the rest of the staff of the TV channel has been taken into custody. Meanwhile, Bilawal's security team has taken the drone operator and the engineer with them, police said.

The PPP workers, who had set out on a long march towards Islamabad from Karachi a few days ago against record inflation and other issues of governance, are now on their way to Sahiwal after making a stopover in Multan.

Jubilant workers belonging to different cities have set up camps along the route to welcome Bilawal.

Bilawal has given a five-day ultimatum to Prime Minister Imran Khan to resign and dissolve the assembly.