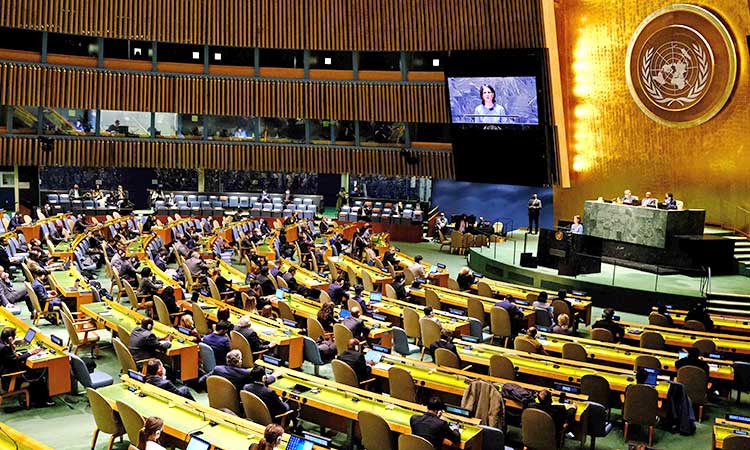 Country after country, from Europe's economic powerhouse to a tiny Pacific island nation, have lined up to lash out at Russia’s invasion of Ukraine and urge support for a UN resolution demanding an immediate halt to Moscow’s offensive and withdrawal of all Russian troops.

Russian President Vladimir Putin did have a few supporters Tuesday at the UN General Assembly's emergency session, including Cuba and North Korea. And there were countries that took no position on the draft resolution, such as Suriname and South Africa, which urged compromise and diplomacy to find a lasting resolution to the crisis.

The final 10 speakers Wednesday morning include a late addition, Russian ally Belarus. Its representative will address the world body just before the United States and is virtually certain to support Moscow’s invasion. The draft resolution "deplores the involvement of Belarus in this unlawful use of force against Ukraine” and calls for it to comply with its international obligations. 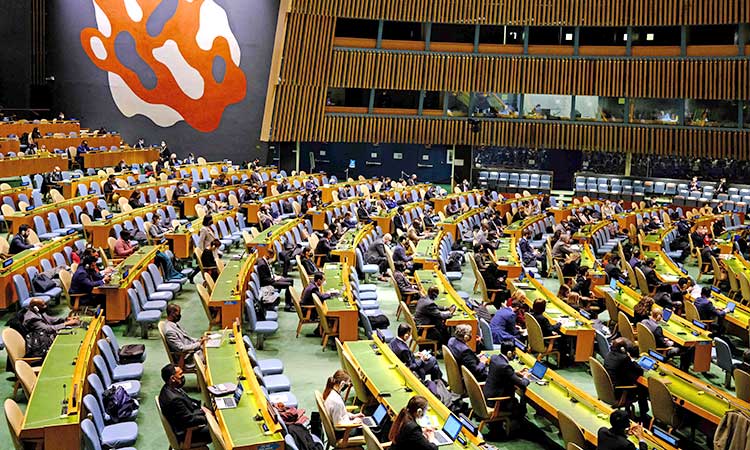 In speaking in favor of the resolution Tuesday, Palau’s UN ambassador, Ilana Seid, told the assembly that Ukraine and Palau have little in common — "one is a large post-Soviet state in eastern Europe and the other is a small, blue ocean state.”

Yet, she said, Palau feels some connection because both became independent in the early 1990s. "And so, it hasn’t escaped us, that if the turns of fate had one of our former colonizers act with the aggression of Russia towards us, citing the justification of historical unity, it would have been our people who would be suffering the atrocities of war we are seeing in Ukraine today.”

Seid said the claim of "historical unity” was the justification Hitler made in absorbing Czechoslovakia, setting events in motion that brought on World War II. "Thus, history has shown us that we simply cannot make concessions to an aggressive power in order to avoid conflict,” she said. 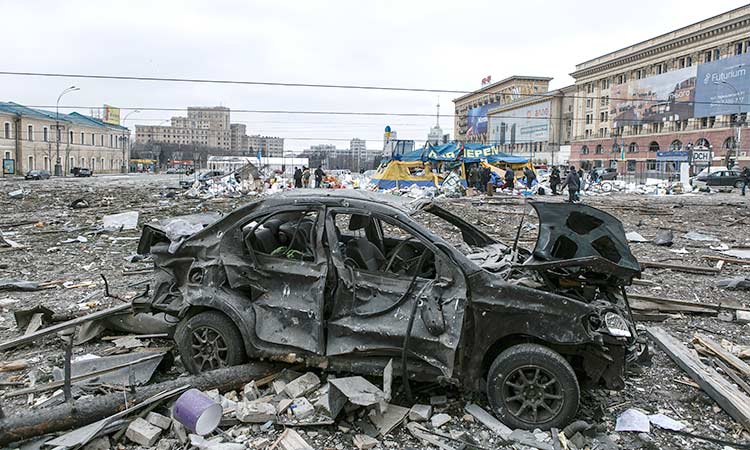 A damaged car sits at the central square following shelling of the City Hall building in Kharkiv, Ukraine. AP

German Foreign Minister Annalena Baerbock, whose country is Europe's largest economic power, said what is at stake in Russia’s war in Ukraine is "the life or death of the Ukrainian people,” European security, and the Charter of the United Nations which calls for peaceful settlement of conflicts and maintaining the sovereignty and territorial integrity of all UN member nations.

Baerbock, who flew to New York to address the assembly’s first emergency special session in decades, lashed out at Russian Foreign Minister Sergey Lavrov, saying he was guilty of telling "blatant lies” to the UN Human Rights Council earlier Tuesday by arguing that Russia is acting in self-defense to protect Russian speakers in Ukraine and has sent its troops as "peacekeepers.”

In fact, she said, the world watched Russia build up troops over months to prepare for its attack and is watching as its forces "are bombing the homes of Russian-speaking Ukrainians in Kharkiv,” the country’s second-largest city.

"Mr. Lavrov, you can deceive yourself, but you won’t deceive your own people,” Baerbock said.

On the other side supporting Russia, North Korean Ambassador Kim Song blamed the United States and the West for the Ukraine crisis.

He said that "in defiance of Russia’s reasonable and just demand to provide it with legal guarantees for security, (they) have systematically undermined the security environment of Europe by becoming more blatant in their attempts to deploy attack weapon systems while pursuing NATO’s eastward expansion.”

Cuban Ambassador Pedro Luis Cuesta blamed the crisis on what he said is the US determination to keep expanding NATO toward Russia’s borders as well as the delivery of modern weapons to Ukraine, ignoring Russia’s concerns for its own security.

Cuesta said the draft resolution "suffers from lack of balance” and doesn’t begin to address the concerns of both parties or "the responsibility of those who took aggressive actions which precipitated the escalation of this conflict.”

The US and other critics of Russia’s invasion introduced a resolution in the Security Council last week demanding that Russia immediately stop using force against Ukraine and withdraw all troops, knowing that Russia would veto it, which it did. The vote was 11-1, with China, India and the United Arab Emirates abstaining, showing significant but not total isolation for Russia.

Russia’s opponents then decided to go to the General Assembly to press for a similar resolution, which would add a condemnation of "the Russian Federation’s decision to increase the readiness of its nuclear forces” -- an issue raised by many speakers Tuesday.

Ambassador Brian Wallace of Jamaica told the assembly that "as a small state we see too clearly the threat of war” and the disruption to people’s lives.

"In the eternal and inspiring words” of legendary Jamaican reggae singer Bob Marley, he said, "therefore, let us get up, stand up, stand up for the rights of all of the people of Ukraine, because we are all Ukraine.”