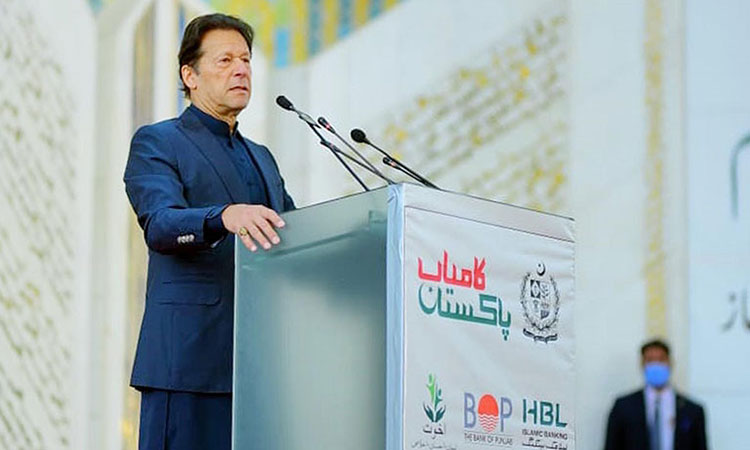 Imran Khan addresses the launching ceremony of an interest-free loan programme at Faisal Mosque in Islamabad on Wednesday. Twitter photo

Pakistan Prime Minister Imran Khan has said loans worth Rs1,000 billion will be provided to 4.5 million deserving households under Kamyab Pakistan Programme (KPP) by next year to lift them out of poverty and enable them earn their livelihoods.

Under the Kamyab Pakistan Programme, the government will disburse loans among the youth, women, and farmers during the next two years in a bid to reduce poverty.

The prime minister announced the scheme while addressing a ceremony attended by people belonging to low-income groups at Faisal Mosque in Islamabad.

He said that loans to the tune of Rs2.5 billion have already been disbursed under the programme.

He said that the Kamyab Pakistan Programme, aimed at taking the country towards a welfare state, will be expanded further.

The programme, he said, envisaged interest-free loans worth Rs500,000 for businesses, Rs350,000 for farmers and Rs2 million for the construction of houses.

He said technical training will also be provided to one member of each deserving family in order to help them stand on their own feet.

Alluding to other pro-people initiatives including health insurance scheme, he said this path, which was envisioned by Philosopher Poet Allama Iqbal, will take the country towards greatness.

Imran regretted that Pakistan in the past could not achieve its due place in the comity of nations because it did not pursue the ideology for which it was created. He noted that the nations, which forget their ideology never succeed.

Imran also expressed satisfaction over the record revenue collection made by the Federal Board of Revenue (FBR) saying it is because of enhanced revenue, the government was able to reduce the prices of petrol and diesel by Rs10 per liter and the electricity tariff by Rs5 per unit. Urging the people to pay their taxes, he assured that this revenue will be used to uplift the poor class and reduce the burden of inflation on the people.

Finance Minister Shaukat Tareen in his video message said the programme was in line with the vision of a socio-welfare state to facilitate the common man.