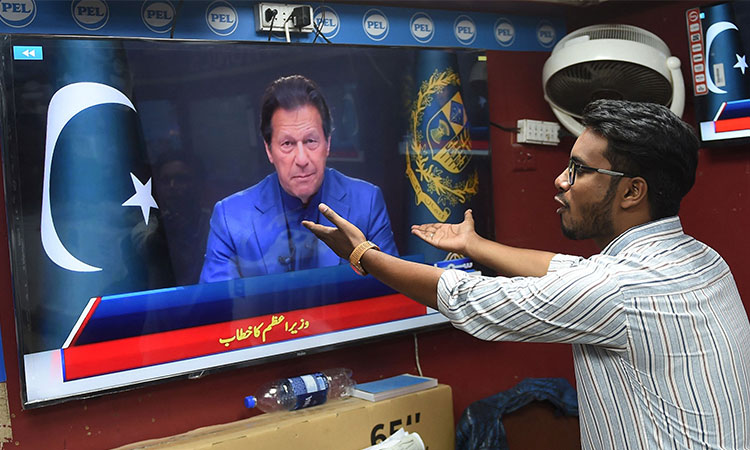 A man gustures as he listen to Imran Khan addressing the nation on television at a market in Karachi on Monday. AFP

Pakistan Prime Minister Imran Khan on Monday night announced the slashing of petroleum products’ price by Rs10 per litre and electricity tariff by Rs5 per unit as part of a series of measures to bring some relief to the masses.

The relief was announced by him as he addressed the nation about the national economic situation and the global challenges in the wake of the Russian invasion of Ukraine.

"I received a summary from the Oil and Gas Regulatory Authority (Ogra) and they recommended increasing the prices of petrol and diesel by Rs10 due to the rise in the price in global markets," he said.

"So today I want to tell you guys this good news that, instead of increasing it, we will decrease petrol prices by Rs10." In the same way, Imran said that electricity was also being made from imported fuel, which had caused prices to soar.

Moreover, overseas Pakistanis who invest in industries or carry out a joint venture will get a five-year tax holiday, he said.

Regretting the fact that past governments did not invest in building dams, he said the Pakistan Tehrik-e-Insaf (PTI) government is constructing 10 dams, which would save the country from global price fluctuations.

"We have also decided to decrease electricity prices by Rs5 per unit. This means that there will be a 20-25 per cent decrease in you electricity bills."

The prime minister said that there would be no increase in petrol and electricity prices until the next budget.

He reiterated that the IT sector, which included companies and freelancers, had been exempted from paying taxes, adding that they would also not face any restrictions on foreign exchange.

Further, IT startups no longer have to pay capital gains tax, he said. Talking about industries, the prime minister said that anyone wishing to set up an industry in Pakistan or invest would not be "asked any questions." He said that he would announce a complete package for this sector later.

Under the Kamyab Jawan programme, he said that the country's youth and farmers would be given interest-free loans while needy people would also be given subsidised loans to build homes.

"Loans worth Rs407 billion will be disbursed during two years." The prime minister expressed satisfaction at the fact that banks had been persuaded to give loans to low-income citizens, noting that so far they had approved Rs150b in loans."

The premier said that he had informed the chief ministers of the provinces that health insurance was a big blessing for low-income families.

"When illness strikes, they should not have the fear that they cannot get treated at a hospital. Often times they go to government hospitals and there are no doctors and nurses."

Imran said that every household in Punjab would have the Sehat card by the end of March, allowing them to avail medical treatment of up to Rs1 million at any hospital.

"A health system is being created in Pakistan. Small hospitals are being constructed in the villages."

He talked about the country's foreign policy, stating that the situation in the world was changing which subsequently had an effect on Pakistan.

He said that his parents were born in an "enslaved India" which made him realise how lucky he was to be born in a free country as he was growing up.

"From the day I entered politics, I wanted a free and independent foreign policy. This means that a nation drafts a policy that benefits the country," he said.