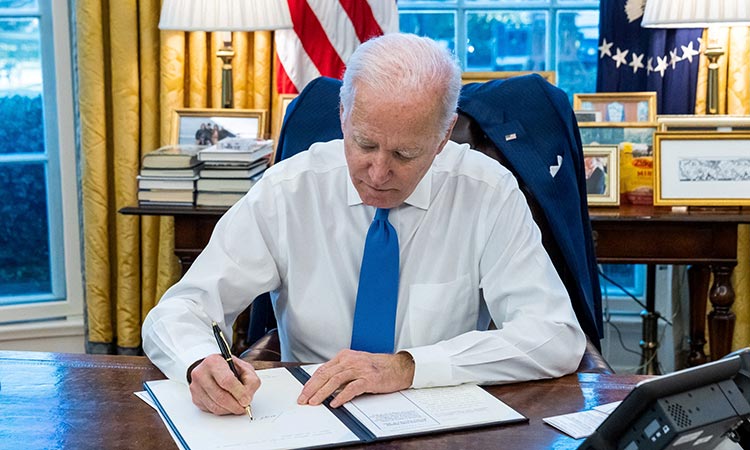 Joe Biden signs an executive order to prohibit trade with eastern Ukraine at the White House on Monday. Reuters

US President Joe Biden signed an executive order to prohibit trade and investment between US individuals and the two breakaway regions of eastern Ukraine recognized as independent by Russia on Monday, the White House said.

Included is the prohibition of "new investment" by an American, wherever located, and the "importation into the United States, directly or indirectly, of any goods, services, or technology from the covered regions."

While separatists have charged that Ukrainian forces were firing on residential areas, Associated Press journalists reporting from several towns and villages in Ukrainian-held territory along the line of contact have not witnessed any notable escalation from the Ukrainian side and have documented signs of intensified shelling by the separatists that destroyed homes and ripped up roads.

Russia's foreign ministry said on Tuesday that Moscow needed to first ratify its friendship treaties with two breakaway Ukrainian regions before it could discuss matters like the exact borders of the territories, RIA news agency reported.

President Vladimir Putin recognised the two breakaway regions in eastern Ukraine as independent on Monday, fuelling fears of a looming war. Russia's parliament is expected to review friendship treaties with the territories on Tuesday. 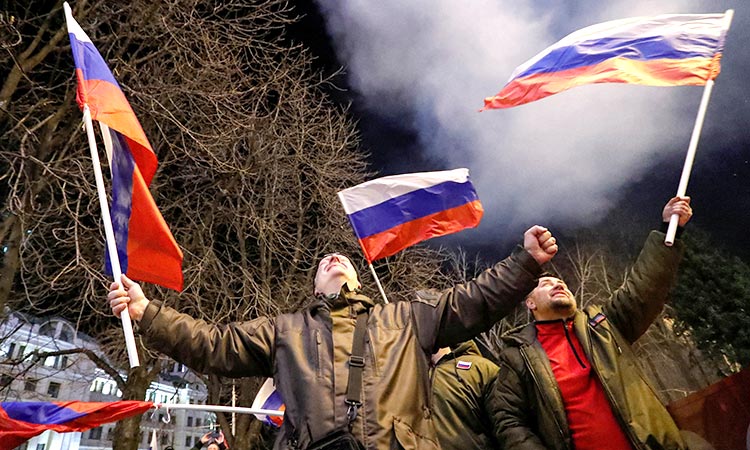 Pro-Russian activists react on a street as fireworks explode in the sky in the separatist-controlled city of Donetsk, Ukraine. Reuters

Some residents of the main rebel-held city of Donetsk described sporadic shelling by Ukrainian forces, but they added that it wasn’t on the same scale as earlier in the conflict.

The separatist authorities said Monday that at least four civilians were killed by Ukrainian shelling over the past 24 hours, and several others were wounded. Ukraine’s military said two Ukrainian soldiers were killed over the weekend, and another serviceman was wounded Monday.

In the village of Novognativka on the Ukraine government-controlled side, 60-year-old Ekaterina Evseeva, said the shelling was worse than at the height of fighting early in the conflict.