Man with headache for 20 years finds bullet inside his head 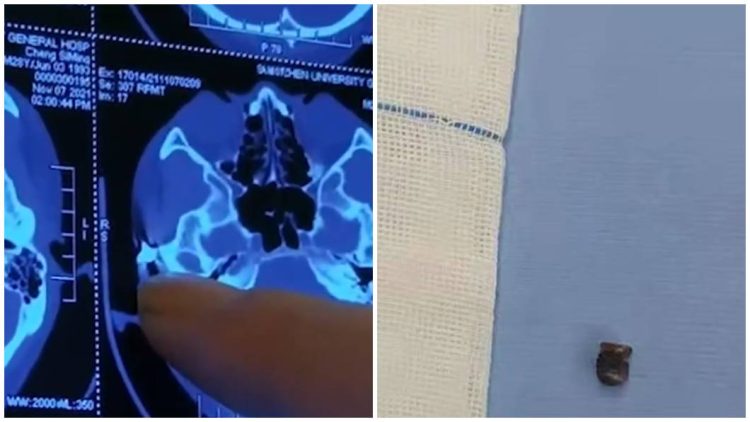 A combo image shows MRI showing a bullet (left) and the bullet after it was extracted.

Doctors at Shenzhen University General Hospital discovered a strange object in the left side of the skull of a 28-year-old Chinese man who had suffered from headache for 20 years.

A medical test revealed that the strange small object was a bullet.

Hospital staff asked the patient if he had any idea how the bullet got into his skull, but he had nothing to say. The young man was shocked to learn that his severe headaches for 20 years had been due to the bullet.

The man said: “I had a constant headache which was very painful lately. I thought it was caused by lack of sleep all days of the week, but sleep was not the reason, especially since the headache kept me awake at night before going to the doctor. The MRI procedure showed the real reason.”

Doctors told the young man that he was lucky to be alive, because the bullet was very close to the temple, but did not fully penetrate the skull or hit the brain. He was admitted for an emergency surgery which was successful and doctors removed the bullet, which was about 1 cm long and 0.5 cm in diameter.

Spoons, knife and rod found in an Indian's stomach

In a bizarre incident, a man in Himachal Pradesh was found with seven spoons, two toothbrushes, two screwdrivers, a metal rod and a knife in his stomach.