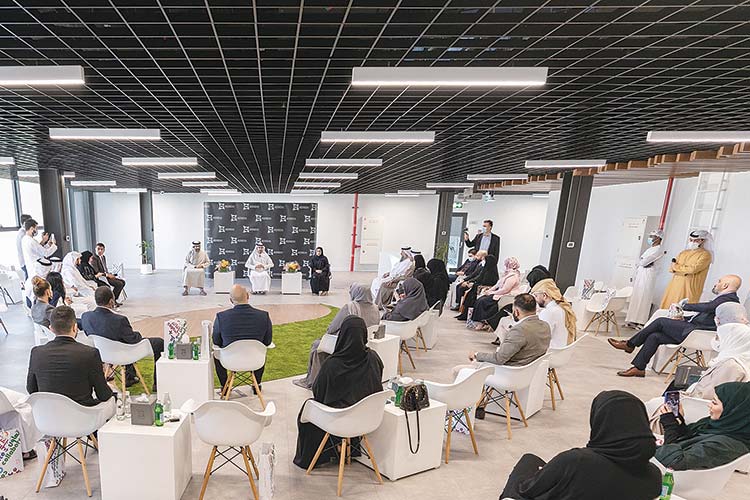 Dr. Khalid Omar Al Midfa asserted that media institutions are an indispensable strategic partner in bringing visions and directions on the same page.

The meeting was part of efforts to strengthen strategic relations between Shams and major media institutions in the UAE, as well as to facilitate collaboration and the brainstorming of ideas to address challenges in the media industry. It is a platform for presenting Shams’ vision for the sector and its vital role in enriching the media and cultural scenes with its initiatives and projects that aim to train media talents and strengthen the media sector.

Dr. Khalid Omar Al Midfa asserted that media institutions are an indispensable strategic partner in bringing visions and directions on the same page and channelling them towards fulfilling common goals. He noted his aspiration for more cooperation with various media institutions in the near future.

On their part, media representatives present at the meeting noted their happiness to be visiting Sharjah Media City, highlighting Shams’ efforts to spearhead the development of the media sector, in partnership with media institutions. Attendees stressed that the door was open for everyone to play a greater role in the upcoming period, expand the media industry’s mission, and set an innovative model for media activities in the UAE and the region.

In a recent report, Dr. Khalid Omar Al Midfa, Chairman of Sharjah Media City (Shams), said that since its formation as a free zone, under an Emiri Decree issued by His Highness Dr. Sheikh Sultan Bin Mohammed Al Qasimi, Supreme Council Member and Ruler of Sharjah, Shams has aimed to become a leading regional and international centre of media technology, noting that national cadres are capable of accomplishing significant achievements.

In an exclusive interview with the Emirates News Agency (WAM), Al Midfa stressed that Shams is keen to become a media centre that offers creative global services based on establishing a comprehensive business community and a hub for small and medium-sized enterprises (SMEs) in a variety of sectors, most notably the media sector, and on training media cadres to advance the media and innovation sector.

He also noted a 60 percent surge in foreign direct investments (FDI) in Sharjah in the second half of 2020 compared to the same period of 2019, adding in 2020, FDIs around the country achieved a growth of 44.2 per cent compared to 2019.

“For four years, Shams has launched many initiatives, most notably incentive programmes supporting investors in the media sector. During the pandemic last year, Shams offered a 20 percent discount on licencing fees and a discount of up to 25 percent for packages for several years,” Al Midfa explained.

Shams also offers the “Virtual Office”, which enables SMEs to conduct their affairs without renting an office. It has organised several workshops and training courses and launched creative media projects, he further added.

“Shams is part of the preparations for the next 50 years, as we have a clear vision for the future of the media sector in Sharjah and the entire country. Shams also creates economic opportunities for investing in the media, real estate and other sectors,” he further said.

“Under the framework of its preparations for the next 50 years, Shams aims to achieve human capacity building for citizens and support the economy by providing new opportunities, which will increase its competitiveness,” he stated.