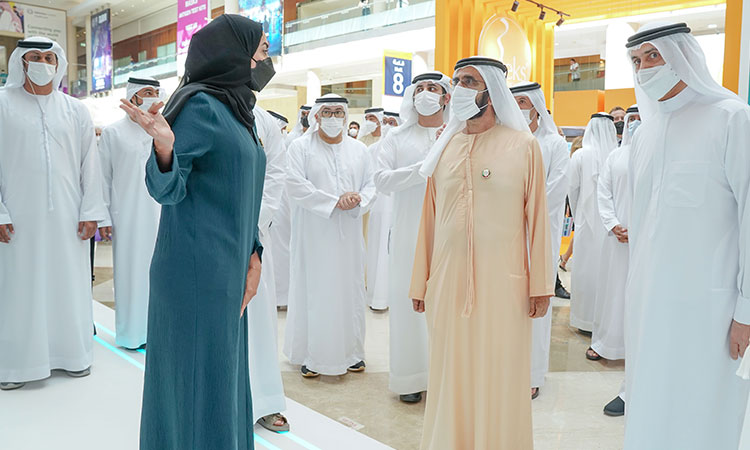 Sheikh Mohammed being briefed during his visit to Arab Health and Medlab Middle East Exhibition in Dubai on Thursday. WAM

His Highness Sheikh Mohammed Bin Rashid Al Maktoum, Vice President, Prime Minister and Ruler of Dubai, said that the UAE is committed to supporting all efforts aimed at enhancing people’s quality of life and ensuring their wellbeing and happiness. 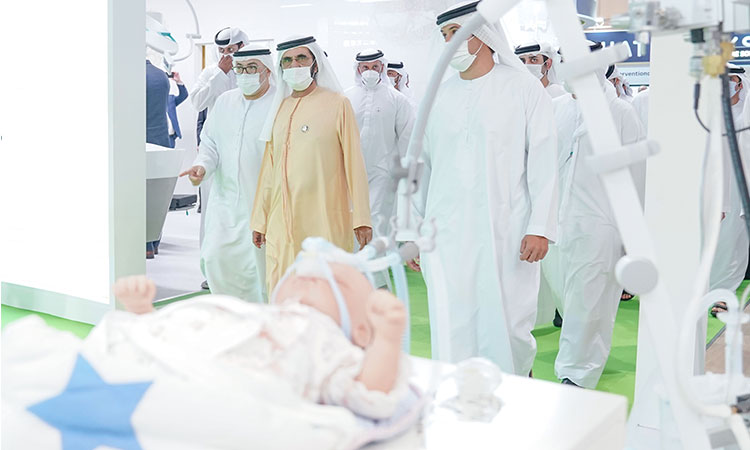 The largest healthcare and laboratory event in the Middle East and North Africa region, which concluded on Thursday, featured the participation of around 3,500 exhibitors from over 60 countries.

His Highness said that over the last two years, the country has demonstrated its success in effectively responding to the global pandemic and overcoming its repercussions while ensuring that all sectors resumed full activity. This has enabled the emirate to become one of the first cities in the world to reopen for international meetings and explore ways in which the world can accelerate recovery at the social, economic and health levels, he noted. 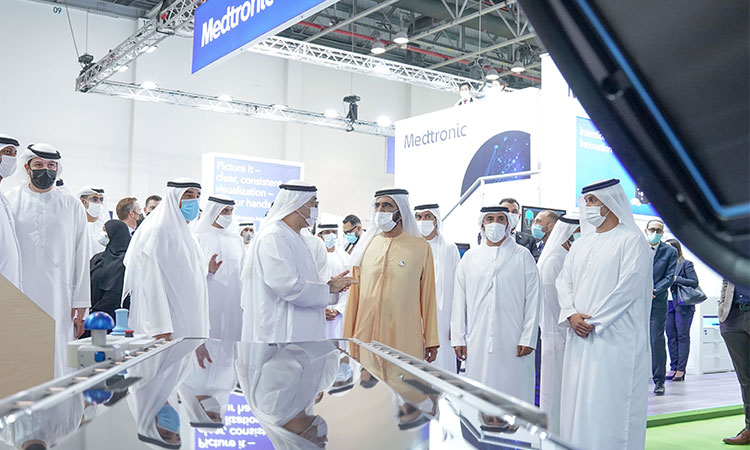 Sheikh Mohammed during a visit to Arab Health and Medlab Middle East Exhibition in Dubai. WAM

Welcoming the participants, His Highness said: "Dubai provides the safest environment for participants from around the world to discuss ideas and exchange knowledge and insights that contribute to creating a better future for humanity. The UAE places the highest priority on strengthening the capabilities of the healthcare sector and advancing efforts to improve the health of people."

Sheikh Mohammed expressed his appreciation to all the medical professionals in the healthcare sector and also highlighted the exemplary partnership between the country’s public and private sectors. 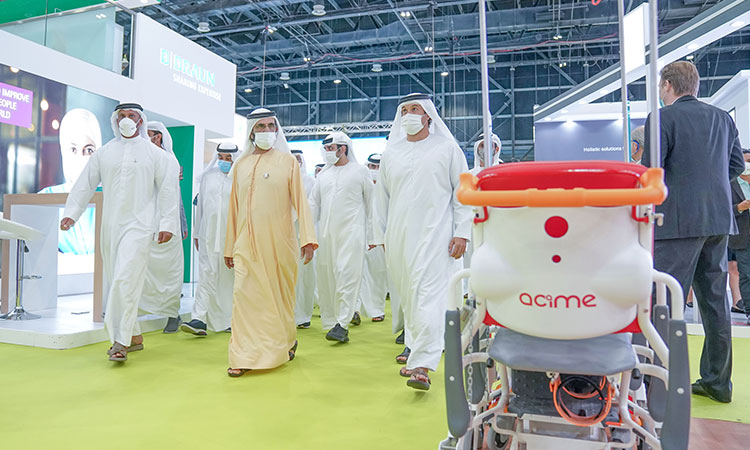 Sheikh Mohammed during a visit to Arab Health and Medlab Middle East Exhibition in Dubai. WAM

During his visit, His Highness was briefed on the latest innovations and solutions being showcased by international companies in the field of diagnostics and treatment.

His Highness was also briefed on the various sectors and areas featured at Arab Health 2022, which include medical equipment and devices, imaging and diagnostics, wellness and prevention, healthcare infrastructure, IT systems and solutions, and orthopedics and physiotherapy rehabilitation. 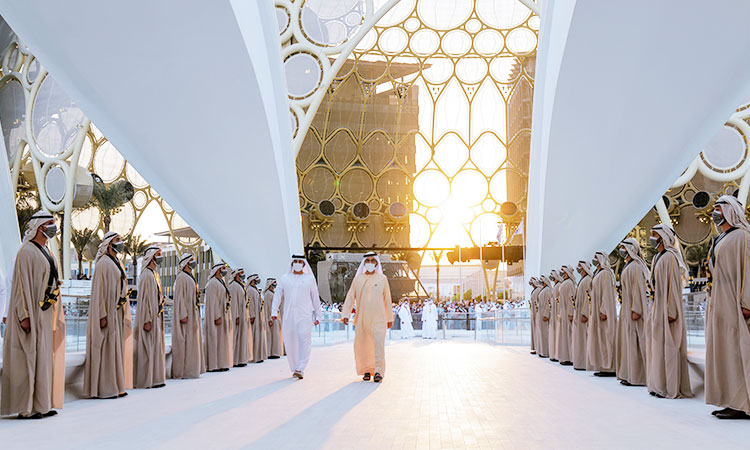 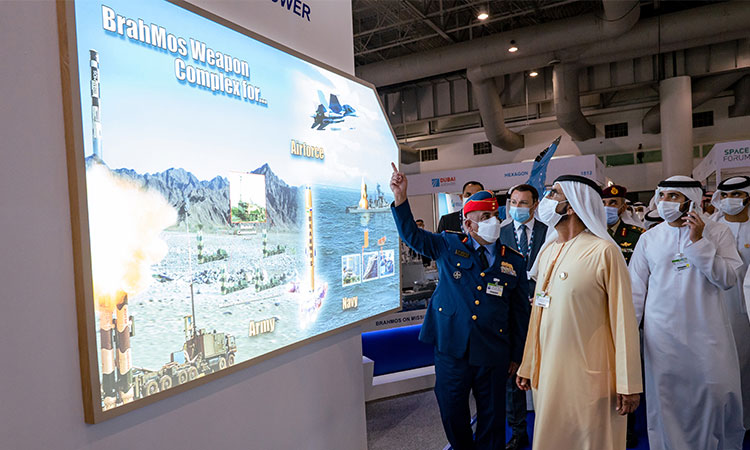 Sheikh Mohammed Bin Rashid Al Maktoum also visited the Airbus pavilion where he was briefed about the company’s new aircraft and the services it provides across the MENA region from its headquarters in Dubai. 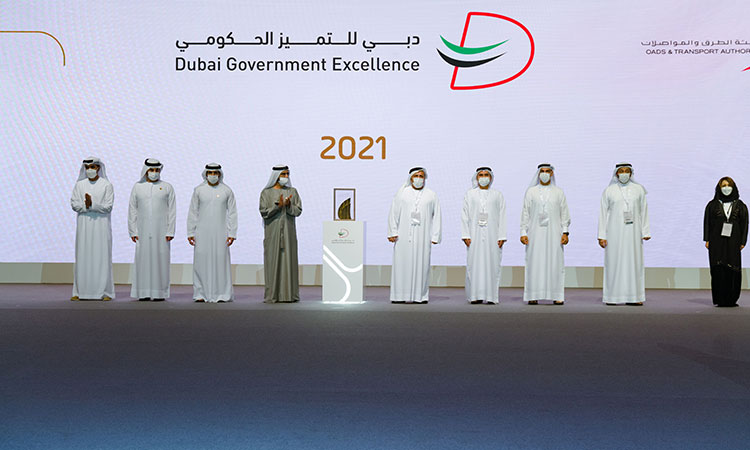 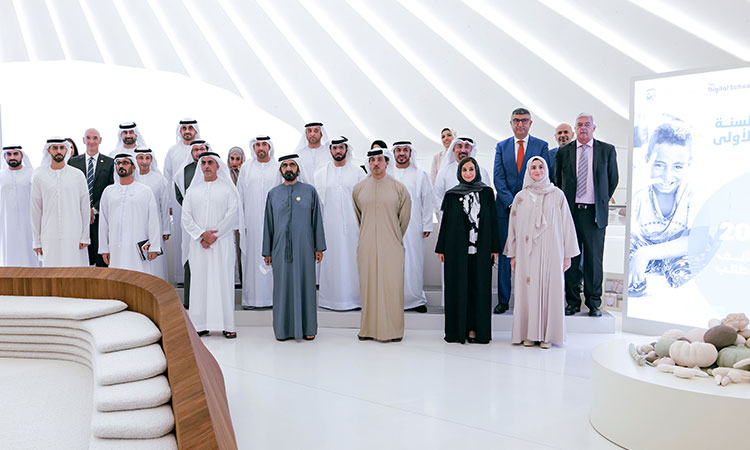