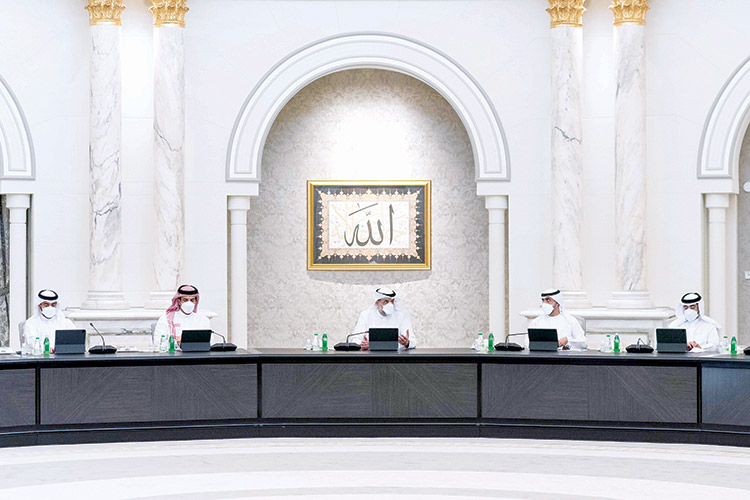 The Sharjah Executive Council meeting in progress on Tuesday.

The Sharjah Executive Council (SEC) valued the achievements made under the leadership and patronage of His Highness Dr Sheikh Sultan Bin Mohammed Al Qasimi, Supreme Council Member and Ruler of Sharjah, during the last fifty years that contributed to the advancement of the Emirate and the development of government work in different sectors, which was reflected in the decent life standard for the citizens of Sharjah.

The council explained that the 25th of January represents a dear and important memory whereas Dr Sheikh Sultan Bin Mohammed Al Qasimi became the Ruler of Sharjah, and the modern renaissance of Sharjah started with a wise vision, insight and permanent follow-up that brought the emirate to the highest ranks and achievements that the people of Sharjah are proud of.  The Council praised the solid foundation and the achievements that paved the way towards the modern renaissance developed by the late Sheikh Khalid Bin Mohammed Al Qasimi, may God have mercy on him.

The Council extended thanks and appreciation to Dr Sheikh Sultan for his constant care, continuous guidance and paternalistic concern for his children through his pioneering initiatives, and to all the loyal people who contributed to achieving the modern renaissance over the last fifty years.

During its meeting, Sharjah Executive Council discussed a set of topics aiming at developing government services and following up on the implementation of the emirate’s public policies.

The new batch of exempted projects includes 48 pilot projects, bringing the total number of exempted projects to 195 projects. Exemption comes as part of SEC permanent support for Emirati entrepreneurs to enter the labour market and advance the economy with the participation of youth.

The Council discussed a set of plans to develop work mechanisms to develop the legislative structure, which will reflect positively on the remarkably growing transportation sector in the emirate.

His Highness Sheikh Humaid Bin Rashid Al Nuaimi, Supreme Council Member and Ruler of Ajman, extended his greetings and best wishes to Sheikh Sultan on the occasion of the 50th anniversary of his assumption to power in the Emirate of Sharjah.

Sheikh Humaid stated that the occasion also coincided with the 50th anniversary of the UAE’s formation, under the leadership of the late Sheikh Zayed Bin Sultan Al Nahyan and the Founding Fathers, and added the sacrifices, giving and achievements of Sheikh Sultan would remain in the nation’s memory.

“On this occasion, we remember 50 years full of achievements, patriotism and devotion in the Ruler of Sharjah’s journey,” Sheikh Humaid said.

His Highness Sheikh Hamad Bin Mohammed Al Sharqi, Supreme Council Member and Ruler of Fujairah, has extended his greetings to Sheikh Sultan on the 50th anniversary of his assumption to power in the Emirate of Sharjah.

Sheikh Hamad said, “I extend my greetings to Sheikh Sultan on the occasion of the 50th anniversary of his assumption to power in Sharjah which has become, thanks to his wisdom, a centre for enlightenment, a cultural and investment hub. Today, we congratulate the Emirate of Sharjah and wish him good health to serve the homeland and Emiratis.”

Minister of Culture and Youth Noura Al Kaabi extended her greetings to Sheikh Sultan on the 50th anniversary of his assumption to power in the Emirate of Sharjah.

Noura said on Twitter, “The march of His Highness Dr Sheikh Sultan Bin Mohammed Al Qasimi over 50 years represents a development experience centred on investing in culture and empowering people... we feel his fingerprints in our culture and we are proud of it. May God prolong his life...”