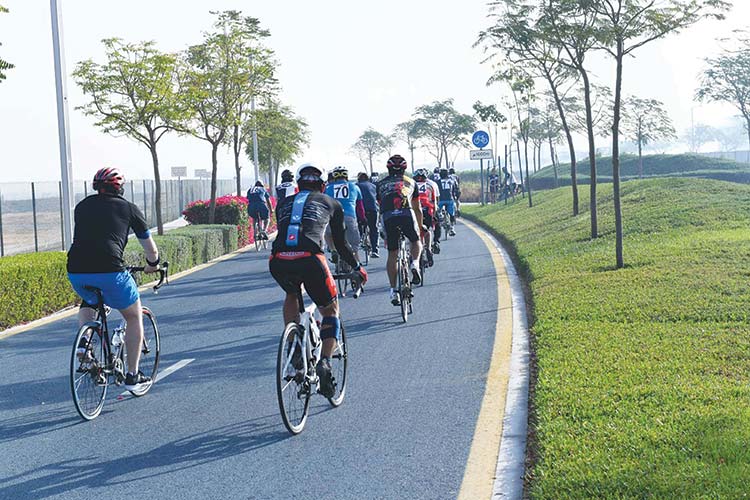 Dubai promotes cycling as a means of environment-friendly transport. WAM

The various infrastructure projects built in Dubai have seen the emirate develop into one of the world’s most prominent cities in the last few decades.

The emirate’s focus on building world-class infrastructure has extended beyond building an advanced network of roads, five-star hotels and the largest malls. Creating a world-class sporting infrastructure that enables people to embrace sports and a physically active lifestyle has been equally important.

Exemplifying this over the last few years is the growth of Dubai’s cycling tracks driven by its vision to become a bicycle-friendly city and offer professional cyclists and fitness enthusiasts an opportunity to practice the sport within a safe environment.

Dubai continues to promote cycling as a means of environment-friendly transport, as part of its efforts to transform itself into the city with the world’s lowest carbon footprint.

It also has comprehensive plans to expand the current 463km of cycling tracks to 759km by 2026 in line with the Dubai 2040 Urban Master Plan launched by Vice President and Prime Minister of the UAE and Ruler of Dubai His Highness Sheikh Mohammed Bin Rashid Al Maktoum that aims to make Dubai the world’s best city to live and enhance the quality of life of citizens, residents and visitors.

During the cooler months of the year, the city’s state-of the-art cycling tracks attract people of all ages and skill levels who are keen to get active while soaking in the stunning views of the city.

From dedicated outdoor cycling tracks for competitive training to recreational cycling paths, Dubai’s growing cycling community has plenty of options to choose from.

Offering a one-of-a-kind outdoor experience, the cycling tracks in Dubai are among a diverse set of attractions being highlighted by the #DubaiDestinations initiative recently launched by the Dubai Media Council to showcase the exceptional events and activities offered by the emirate.

Among Dubai’s most popular tracks and the longest of them is the Al Qudra track.

Providing cyclists breathtaking views of the desert, the 135km track extends from Al Barari area to Bab El Shams along Al Qudra Street and is usually one of the most preferred paths for professional athletes.

The track has two paths – a shorter 18km path and a longer 50km path. Visitors to the track can also easily rent a bike on site at Al Qudra.

Another unique location where people can go mountain biking is located in Hatta.

The area is ideal for cyclists who want to escape the hustle and bustle of the city for a ride within the scenic mountainous area. Cyclists can also hire bikes in the area and other essentials.

The Dubai Autodrome, a world-class motorsport and entertainment facility, also offers a closed 2.46km circuit that can be a perfect choice for beginners or those practising the sport after a long time.