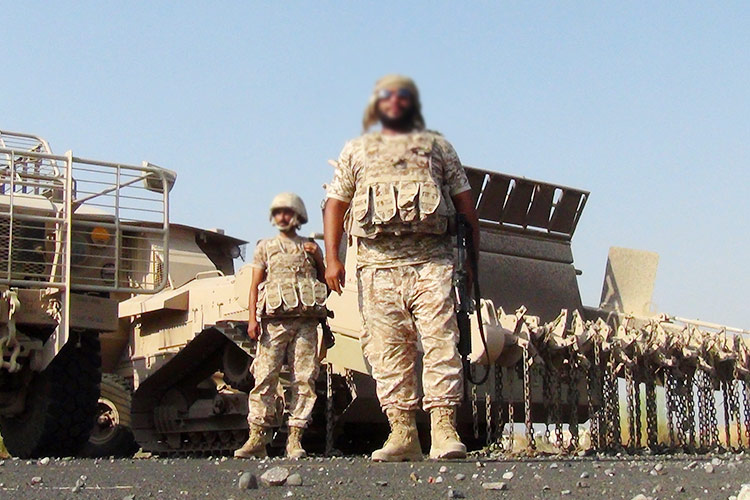 Emirati soldiers stand during rehabilitation and demining operations at the Al-Anad airbase in the southern Lahj governorate, Aden. File/ AFP

In a statement, the Ministry of Foreign Affairs and International Cooperation said “we condemn the Houthi militia's targeting of civilian areas and facilities on UAE soil today. We reiterate that those responsible for this unlawful targeting of our country will be held accountable."

The ministry said that the terrorist militia has carried out a cowardly act to spread terrorism and chaos in the region in order to achieve its illegal aims and objectives. It called on the international community to strongly condemn and denounce these terrorist acts that target civilians and civilian facilities.

The Ministry of Foreign Affairs and International Cooperation also expressed its sincere condolences to the families of the deceased, and wishes for a speedy recovery to the injured.

UN Secretary-General Antonio Guterres "condemns" a suspected drone attack in Abu Dhabi that killed three people Monday and called on "all parties to exercise maximum restraint and prevent any escalation," his spokesman said.

"Attacks on civilians and civilian infrastructure are prohibited by international humanitarian law," Stephane Dujarric added in comments to reporters after the attack.

The European Union condemns the Houthi attack on the UAE, says targeting civilians is 'unacceptable'

Saudi Arabia’s Ministry of Foreign Affairs has condemned in "the strongest terms" the cowardly terrorist attack that targeted civil facilities and territories in the UAE on Monday.

The Kingdom affirmed its full support for the UAE in the face of all threats to its security and stability.

A Saudi foreign ministry statement said that this terrorist act, which the Houthis are responsible for, "reaffirms the danger of this terrorist group and its threat to security, peace, and stability in the region and the world."

The Kingdom stressed that it continues to confront all Houthi terrorist attempts and practices through its leadership of the Coalition to Restore Legitimacy in Yemen.

The Kingdom offered its sincere condolences and sympathy to the families of the victims and to the government and people of the UAE, wishing a speedy recovery to all those injured in the attack.

The Kingdom of Bahrain has also strongly condemned the terrorist Houthi militia’s launch of explosive-laden drones on Abu Dhabi.

In a statement carried by the Bahrain News Agency, the Foreign Affairs Ministry stressed that the cowardly terrorist attack, which resulted in the death of three civilians and the injury of others, violates international humanitarian law and all other international laws and constitutes a blatant attack on the sovereignty of the United Arab Emirates, reflecting the insistence of these terrorist Houthi militias to continue their cowardly criminal attacks.

The Ministry affirmed that the Kingdom stands in solidarity with the United Arab Emirates and all the measures it will take to confront such cowardly attacks.

The Ministry further called upon the international community to take the necessary steps against the militias, whose hostile acts confirm that they are a terrorist organisation that poses a serious threat to the stability and security of the region.

The Omani Foreign Ministry has expressed solidarity with the UAE and pledged support for the measures it is taking to maintain its security and stability.

In a statement issued on Monday, the Ministry expressed its denunciation and condemnation of the attack that targeted the UAE territories, which resulted in the death and injury of a number of civilians, and affirmed the Sultanate of Oman's firm position in rejecting violence and targeting of civilians.

Kuwait has condemned in the strongest terms the cowardly terrorist drone attack by the Houthi militia that targeted civilian facilities in the UAE on Monday, which resulted in the death of three civilians and the injury of others.

In a statement issued on Monday, the Kuwaiti Foreign Ministry said the attack is a "deliberate attempt" by the Houthis to violate the basic principles of international laws and conventions.

"Kuwait firmly stands alongside the UAE and backs all measures the Gulf Arab state takes to protect its security and stability," the statement added.

Qatar has expressed its strong condemnation and denunciation of the attacks that targeted civilian areas in the United Arab Emirates that led to fatalities and injuries.

In a statement on Monday, the Qatari Ministry of Foreign Affairs considered targeting civilian installations and vital facilities a terrorist act that violates all international norms and laws.

The ministry expressed the condolences of the State of Qatar to the families of the victims and its wishes of a speedy recovery for the injured and of safety and stability for the government and people of the United Arab Emirates.

In a statement issued on Monday, the Arab Parliament reiterated that the attack represents a cowardly terrorist aggression, a flagrant violation of international humanitarian law and all international laws, and a blatant attack on the sovereignty of the UAE. The hostile attack also demonstrates the insistence of the terrorist Houthi militias to continue their cowardly criminal behavior, said the statement.

The Arab Parliament stressed its support for the UAE and all measures it will take to confront these cowardly sabotage acts, calling on the international community to take firm steps against these militias whose criminal acts confirm that they are a terrorist organisation that poses a serious threat to the security and stability of the region.

The Organisation of Islamic Cooperation (OIC) has condemned, in the strongest terms, the Houthi attack on civil areas and facilities in the UAE on Monday.

The OIC condemned the Houthi Militia's insistence on continuing their criminal operations against civil facilities in contravention of international laws and norms.

The OIC Secretary General Hussein Ibrahim Taha expressed his strong condemnation of this heinous attack, reiterating the OIC's position in support of the UAE and all the measures it's taking to protect its territories and security.

ADNOC has also issued a statement on incident at Mussafah Fuel Depot.

"At approximately 10:00 AM this morning, an incident occurred at our Mussafah Fuel Depot in Abu Dhabi which resulted in the outbreak of a fir," the statement from ADNOC says.

ADNOC is deeply saddened to confirm that three colleagues have died.

Professional support teams are supporting the families of all those who have been impacted.

At this time, the entire ADNOC family extends its deepest sympathy to the family and friends of our colleagues who died this morning.

"We are working closely with the relevant authorities to determine the exact cause and a detailed investigation has commenced," the statement concluded.