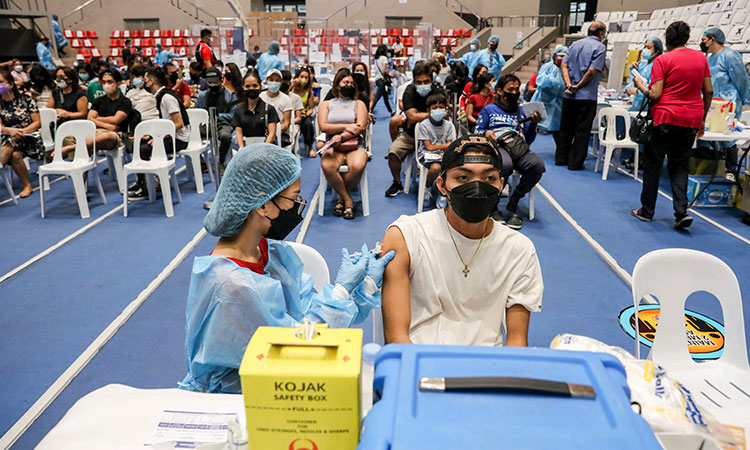 A man receives a dose of Moderna' vaccine at the Makati Coliseum in Makati City, Philippines, on Thursday. AP


The government tightened restrictions in Manila and several provinces and cities this week. Unvaccinated people among the capital's 13 million people were ordered to stay home, after infection numbers tripled in the last two days.

Health officials said infections were projected to increase further in the coming days and would peak by the end of the month. "Because it's a national emergency, it is my position that we can restrain" people who have not got their shots, Duterte said in a pre-recorded message. 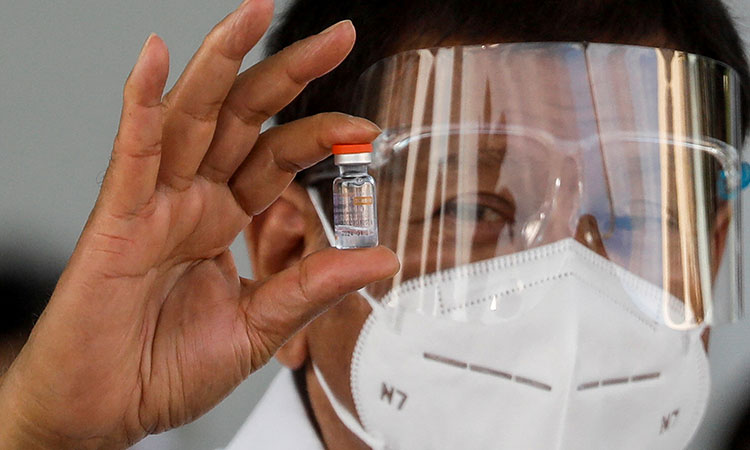 Rodrigo Duterte holds a vial of Sinovac Biotech's CoronaVac as the first shipment of vaccine arrives in Manila. Reuters

"I am now giving orders to the (village chiefs) to look for those persons who are not vaccinated and just request them or order them, if you may, to stay put."
"And if he refuses and goes out of the house and goes around in the community or maybe everywhere, he can be restrained. If he refuses then the (official) is empowered to arrest the recalcitrant persons," he added.

Coronavirus vaccinations are voluntary in the nation of more than 100 million people, and less than half the population have so far completed their jabs.
Duterte said he was "appalled" at the large numbers of Filipinos yet to be vaccinated.

"If you don't get a jab you put everybody in jeopardy," he said, with the virus "galloping in our community, in our country and in the world."

New infections surged to more than 17,000 on Thursday, rising more than threefold from Tuesday's toll, according to health department data. The disease has infected 2.9 million people in the country, nearly 52,000 of whom have died.

Health experts say the new cases are driven by the highly transmissible Omicron variant. Under the tighter restrictions, in place until mid-January, unvaccinated residents have to stay at home unless buying essentials or exercising.

Restaurants, parks, churches and beauty salons will operate at lower capacity, while in-person classes and contact sports are suspended.

After Dr. Ifeanyi Nsofor and his wife received two doses of AstraZeneca’s coronavirus vaccine in Nigeria, they assumed they would be free to travel this summer to a European destination of their choice. They were wrong. The couple —and millions of other people who have been vaccinated