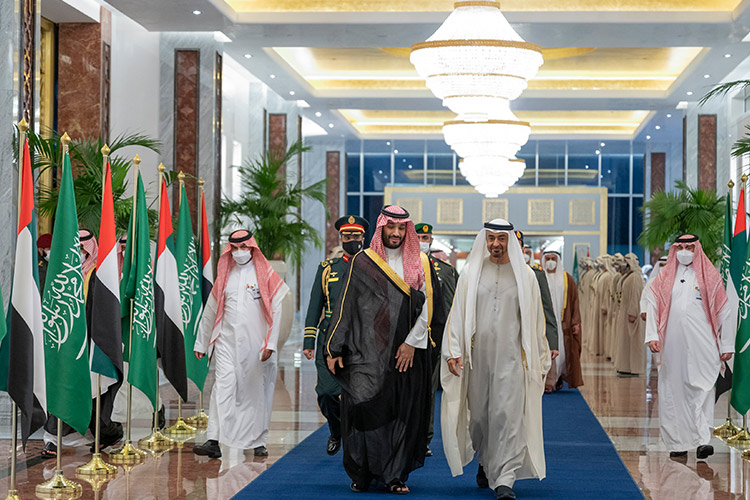 Prince Muhammad Bin Salman Bin Abdulaziz Al Saud, Crown Prince, Deputy Prime Minister and Minister of Defense of of Saudi Arabia, arrived in the UAE on Tuesday, on a two-day official visit to the country.

At Al Watan Palace in Abu Dhabi, on Tuesday, Mohamed Bin Zayed and Prince Mohammed Bin Salman discussed the relevant fraternal relations, bilateral cooperation and promising opportunities for developing them in the light of the strategic partnership, bringing together the two brotherly countries.

They also discussed the all the regional and international issues of common concern.

The Saudi Crown Prince delivered the congratulation of the Custodian of the Two Holy Mosques to President His Highness Sheikh Khalifa Bin Zayed Al Nahyan, and to His Highness Sheikh Mohammed Bin Rashid Al Maktoum, UAE Vice President, Prime Minister of the UAE on the occasion of the UAE fiftieth National Day, wishing that Allah Almighty would keep safe the UAE and bless the people with all good, development and prosperity.

During their meeting, the Crown Prince of Abu Dhabi discussed with Mohammed Bin Salman various aspects of strategic cooperation between the UAE and the KSA, which is based on solid fundamentals of understanding, cooperation, joint work and mutual interests.

They also tackled the importance of putting into effect the Arab and GCC joint action and a number of regional and international issues, which concern the two countries.

They stressed the need to establish the pillars of the regional stability, which constitutes the main rule for development, construction and progress.