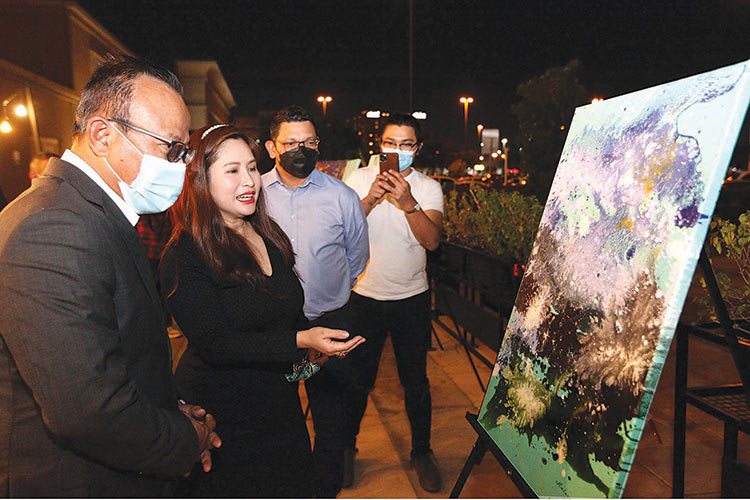 Malaya Roxanne Santos explains to Indonesian Consul General in Dubai and the Northern Emirates Candra Negara her concept on one of the panels of ‘Dance of the Corals’ while Off The Hook managing director Rolly Brucales looks on. John Varughese/Gulf Today

Eleven years after her first visit, a Filipina indie filmmaker who has dabbled into abstract painting, as she has been exposed to the visual arts since childhood, is staging her first international one-man show in Dubai.

On Sunday evening and from the al fresco opening of the “Splash of Hope-Journey of Healing and Optimism,” Philippine Consulate General-Dubai Consular Attache Antonette Peralta, congratulated Malaya Roxanne Santos, for being an inspiration and for demonstrating that any trying episode such as the Novel Coronavirus, is a dichotomy whereby faith and optimism germinate.

Another special guest, Indonesian Consul General in Dubai and the Northern Emirates Candra Negara saluted Santos for the two sets of six paintings that beckon calm, placidness, and absolute happiness despite tragedy, pain and loss.

Exhibition venue Off The Hook Seafood Restaurant (Ibn Battuta Mall) managing director Rolly Brucales was happy to host Santos. Their partnership had fueled the advocacy of promoting visual arts as “both culinary arts and visual arts are tapestries of life.”

Santos, a mother of three-with her son Geo, a fellow alumnus from her alma mater, the University of the Philippines (Diliman Campus) - College of Fine Arts Department, and her daughter Annie, who indulged in the multi-media arts in senior high school-could have opted to bring home the six paintings for display right in her own Likha ni Malaya (Malaya’s Creation) Studio & Gallery in Quezon City, Metro Manila: “But then, why bring home when it is possible to have my first solo exhibition right here. The UAE and Dubai caused me to paint while on a break.”

With the UAE and Dubai as the cause for the “Dance of the Corals” (diptych set of two acrylic) and the “Songs of the Sea” (polyptich set of four acrylic), Gulf Today who first met Santos 11 years back, asked of her impression: “UAE was beautiful then. It is more majestic now. In terms of architecture, Dubai has always been in the forefront. With the advent of the Louvre (recently visited), Abu Dhabi has become so much more interesting as an arts and culture hub.”

Thrilled that she and her children returned to the UAE in time for the Expo 2020 Dubai and alongside the opening of seasonal tourist spots, Santos added: “Everything is like a breath of fresh air. This includes the people who exude warmth and kindness. It is the little things like sharing food when we went on a picnic at Love Lake; stopping by to entertain my crying baby at Legoland. Little acts of kindness but which matter greatly.”

Santos, whose first name means “free” in Filipino as her parents played major roles in the fight against human rights, at the height of the tumultuous Marcos two-decade so-called dictatorship, added: “The lights and sounds of the Expo 2020 was such a big inspiration. It seemed like a light at the end of the tunnel. Life amidst all those sickness, grief and death. A much welcome sanctuary and refuge.”

Consequently, both the “Dance of the Corals” and the “Songs of the Sea” are her contribution to the core message of the World Expo of “flow and sustainable resources.” Both sets of acrylic paintings also refer to the significance of the Bangkota Philippine Pavilion at the Sustainability District: “The Philippines and the Filipino people have so much potential and resiliency, grit, courage, grace and hopes of healing ourselves as well as our nation. Coral is called the ‘garden of the sea’ that symbolise wisdom, modesty, happiness and unity. We dance, sing and laugh in the midst of any adversity. We go with the flow of the sea, the Filipino diaspora. We thrive where life takes us and someday, like the sea turtles, we go back home to lay eggs. Eggs of hope, progress and prosperity for all.”

Santos is heavily influenced by her own two “maestros” (teacher) Romulo Galicano who patiently mentored her on “classical realism” and Fernando Sena, the Father of Philippine Art Workshops, including American painter Jackson Pollock. She is appalled by condescending art critics, claiming that while everyone is interconnected, each has his own story to narrate: “Everyone has an opinion. We have the right to express ourselves. 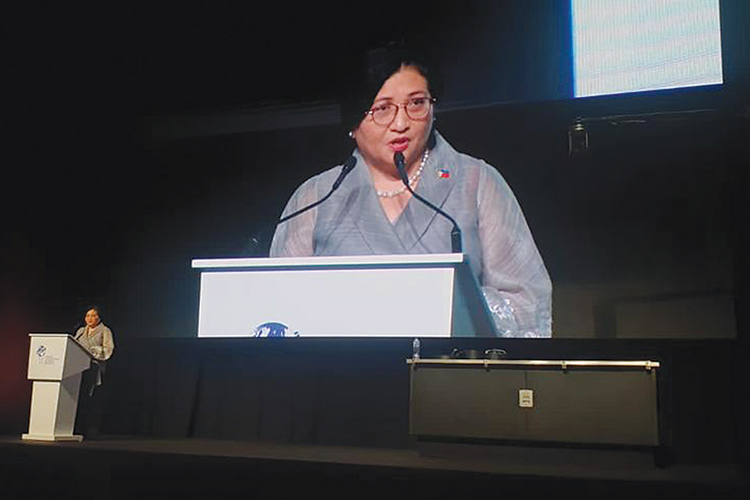 Filipino cuisine is definitely more than the Pancit “for long life,” the colourful icy summer merienda (snacks)/dessert Halo-Halo, and the more popular Adobo-all of varying delectability for each Philippine region or province has its own concoction.