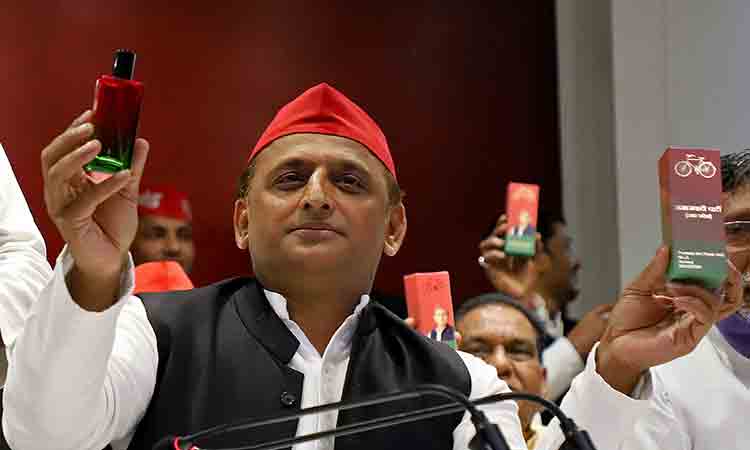 Akhilesh Yadav displays a bottle of perfume during its launch at party office in Lucknow. AFP

A left-wing Indian opposition party has launched a perfume with what it calls the "fragrance of brotherhood, love and socialism" that will "end hatred."

The product was unveiled by the Samajwadi Party in the hopes of wooing voters in elections in early 2022 in the northern state of Uttar Pradesh.

Pushpraj Jain, a state lawmaker from the party, said it took "22 natural fragrances" — a reference to the 2022 vote — to develop the scent.

"When you use it the anger and hatred in the air will be defeated. We will also prepare another scent with 24 natural fragrances (for 2024 national elections)," Jain said.

The fragrance comes in a bottle in the party's red and green colours embossed with its workmanlike election logo of a bicycle.

The state has been run by the BJP since 2017 under saffron-robed, firebrand Hindu monk Yogi Adityanath, a hardliner known for his inflammatory rhetoric against Muslims.

Adityanath, 49, could strengthen his claim as a possible successor to 71-year-old Modi if he retains power in the poll, which will likely be held in February or March.

Uttar Pradesh's huge population makes it a key political battleground. There and in other states, politicians and parties use all kind of sops, freebies and even cash bribes to win over voters.

Yadav's party distributed the perfume to journalists and party workers at a press conference without detailing when, where and how it will be available for potential voters.

It is not the first time Yadav has launched a perfume. Local media reports say the state's former chief minister released four fragrances inspired by four cities in Uttar Pradesh to celebrate his four years in office in 2016.