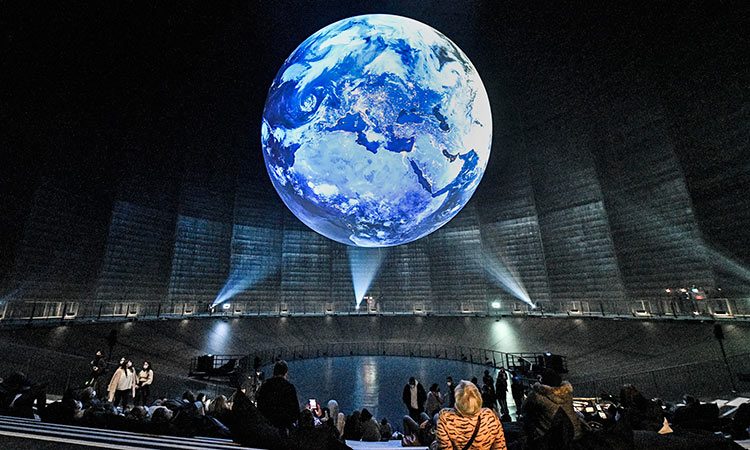 Visitors watch a giant earth installation at the exhibition “The Fragile Paradise” in Oberhausen, Germany. AP

World leaders will start descending on the Scottish city of Glasgow on Sunday for the United Nations COP26 summit, billed as a make-or-break chance to save the planet from the most calamitous effects of climate change.

Delayed by a year because of the COVID-19 pandemic, COP26 aims to keep alive a target of capping global warming at 1.5C above pre-industrial levels — the limit scientists say would avoid its most destructive consequences.

Although, hundreds of activists rallied in Glasgow on Saturday to urge world leaders to act on climate change, in the biggest protests yet in the Scottish city ahead of the crucial COP26 summit.

Meeting that goal, agreed in Paris to much fanfare in 2015, will require a surge in political momentum and diplomatic heavy-lifting to make up for the insufficient action and empty pledges that have characterised much of global climate politics. 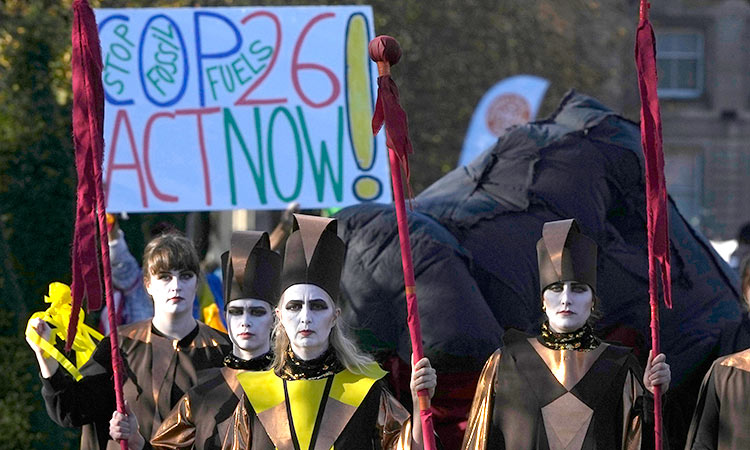 Extinction Rebellion demonstrators take part in protest in Glasgow, Scotland ahead of the start of COP26. AP

Meanwhile, G20 leaders gather for a second day of their Rome summit on Sunday, with all eyes on whether they can deliver a meaningful commitment on climate change ahead of crucial UN talks.

The Group of 20 major economies emit nearly 80 percent of carbon emissions, and a promise of action would provide a much-needed boost to COP26 climate talks starting in Glasgow on Sunday.

The conference needs to secure more ambitious pledges to further cut emissions, lock in billions in climate finance, and finish the rules to implement the Paris Agreement with the unanimous consent of the nearly 200 countries that signed it. "Let’s be clear - there is a serious risk that Glasgow will not deliver," UN Secretary General Antonio Guterres told leaders of the Group of 20 (G20) rich nations last week.

"Even if recent pledges were clear and credible — and there are serious questions about some of them — we are still careening towards climate catastrophe."

Moreover, India and the UK will launch a project that aims to create a solar grid connecting countries in different parts of the world at the upcoming UN climate talks in Glasgow, Scotland.

The project, known as the "Green Grids Initiative,” is being initiated by the International Solar Alliance, which was launched by India and France at the 2015 Paris climate conference to promote solar energy. The U.K. and India agreed to join forces in the initiative in May this year. 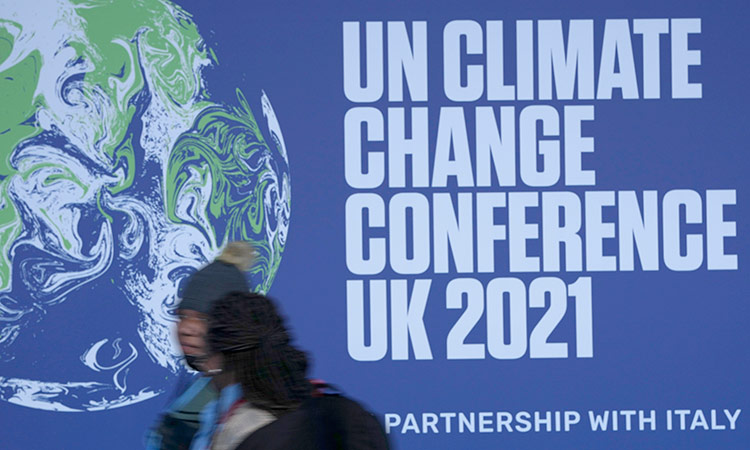 Attendees walk past a banner at the venue where COP climate conference will be held in Glasgow, Scotland. File/AP

The signals ahead of COP26 have been mixed. A new pledge last week from China, the world's biggest polluter, was labelled a missed opportunity that will cast a shadow over the two-week summit. Announcements from Russia and Saudi Arabia were also lacklustre.