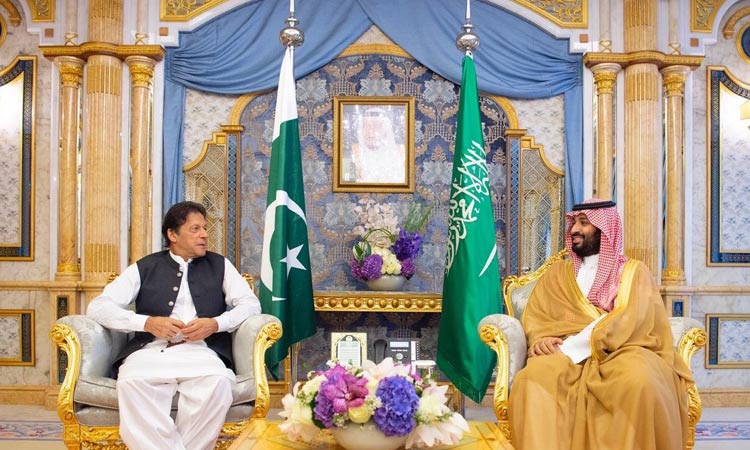 Prime Minister Imran Khan on Wednesday thanked Saudi Crown Prince Mohammad Bin Salman for supporting Pakistan with $3 billion as a deposit in the State Bank of Pakistan (SBP) and $1.2 billion worth of oil supplies on deferred payments.

In a tweet, Imran said Saudi Arabia has supported Pakistan in difficult times, including now when the world confronts rising commodity prices.

The prime minister thanked Saudi Arabia after the kingdom agreed to provide $3 billion deposits in order to shore up the country’s foreign exchange reserves.

Pakistan is also making efforts to finalise a staff-level agreement with the International Monetary Fund (IMF) and the announcement in this regard is expected very soon. This package from Saudi Arabia is expected to go a long way to accomplish the sixth review under the Extended Fund Facility (EFF). 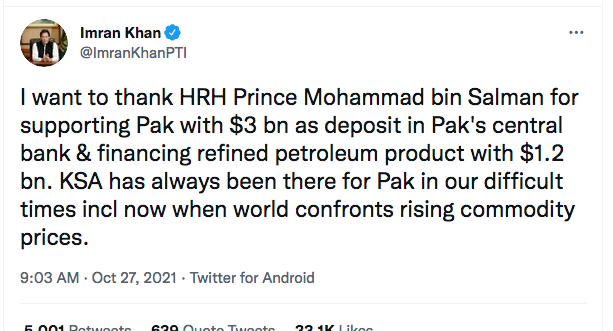 During the recently held visit of Imran along with other cabinet ministers, including Adviser on Finance Shaukat Tarin, Saudi Arabia agreed to extend all-out support to Pakistan.

A report said an agreement to this effect was reached during Imran’s visit to Saudi Arabia, a senior government official said. 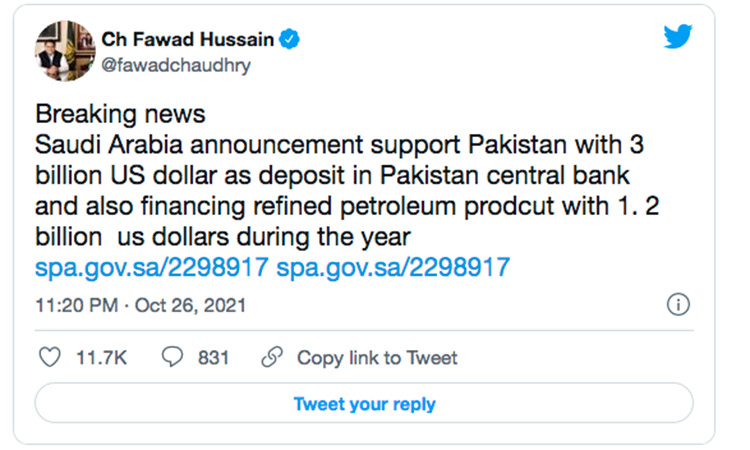 The development was later confirmed in a midnight tweet by Information Minister Fawad Chaudhry. "Saudi Arabia's announcement to support Pakistan with 3 billion US dollars as deposit in Pakistan central bank and also financing refined petroleum products with 1.2 billion US dollars during the year,” he wrote.

Earlier during the day, Shaukat Tarin also tweeted that the finance minister of Saudi Arabia has promised to keep $3 billion with the State Bank of Pakistan and $1.2 billion deferred oil facility. 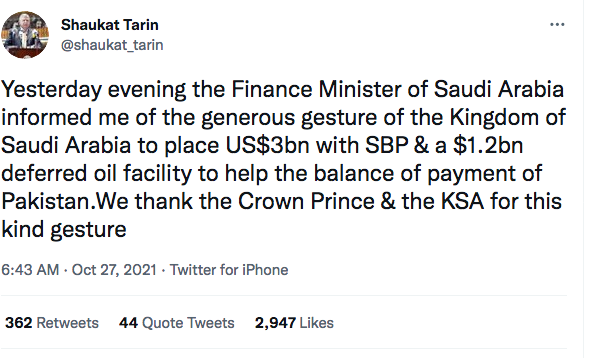 "Kingdom of Saudi Arabia to place US$3bn with SBP & a $1.2bn deferred oil facility to help the balance of payment of Pakistan,” Tarin said in a tweet.

The finance adviser has termed the bid a "generous gesture” on the part of the Kingdom of Saudi Arabia.

He expressed gratitude for the "kind gesture” that he said will help the balance of payment of Pakistan. 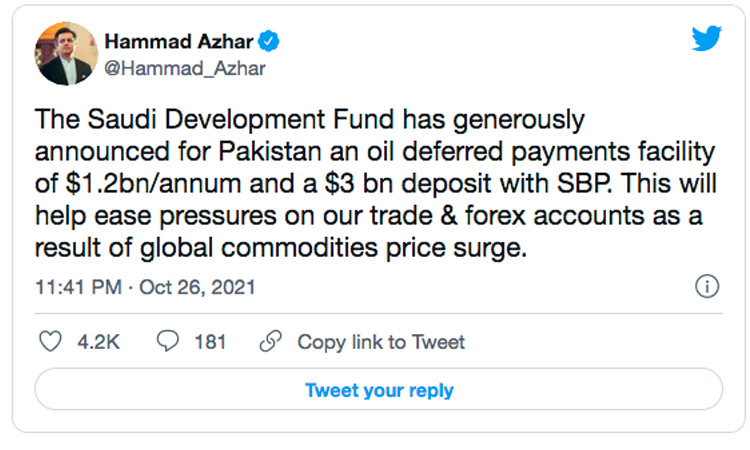 Minister of Energy Hammad Azhar, who was also accompanied Imran Khan on his visit to Saudi Arabia said the Saudi Development Fund has generously announced for Pakistan an oil deferred payments facility of $1.2b/annum and a $3b deposit with SBP.

"This will help ease pressures on our trade & forex accounts as a result of global commodities price surge,” he said in a message on Twitter.

The Saudi government would immediately deposit $3b in Pakistan’s account for a year and keep it rolling at least until the completion of the IMF programme in October 2023, the official said.

The facility is expected to help Pakistan convince the IMF about its financing plan. In addition, the Saudi government would provide crude oil to Islamabad on deferred payments worth up to $1.5b per annum.

Late yesterday night the Saudi Press Agency wrote that the Fund for Development announced the issuance of the generous directive to deposit an amount of $3b with the Central Bank of Pakistan. 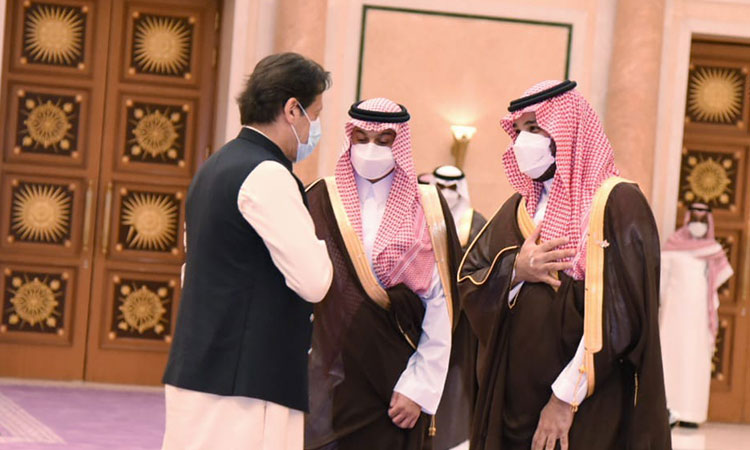 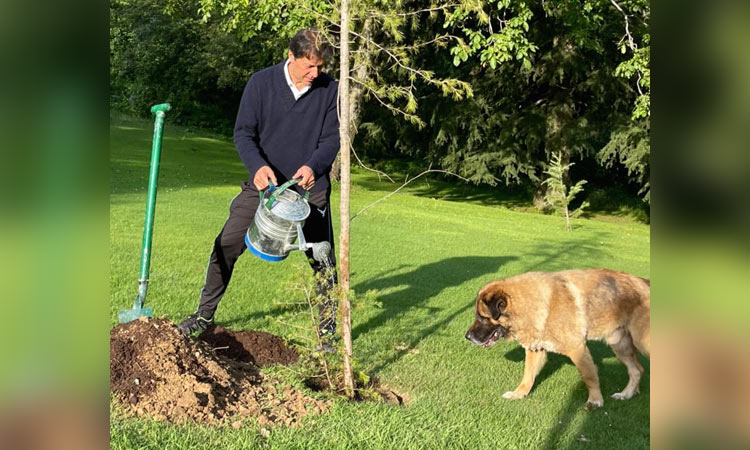 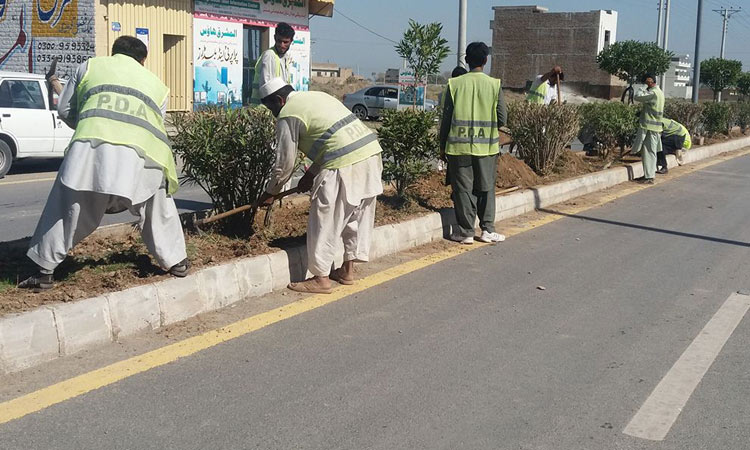