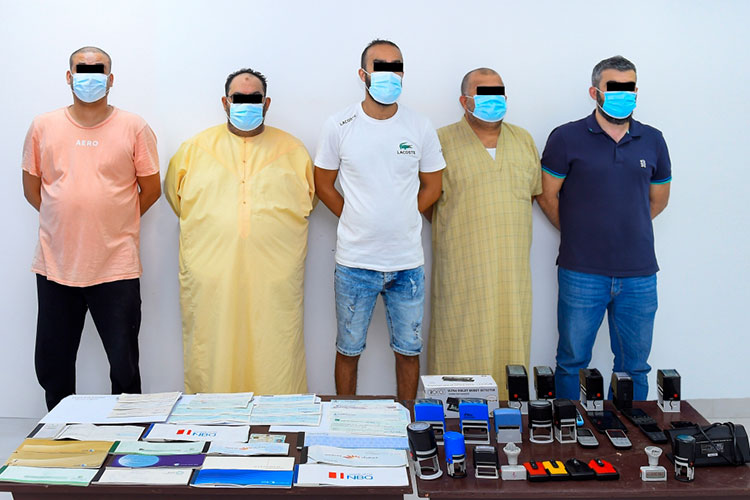 The suspects photographed with seized mobiles and cheques.

The Criminal Investigation Department at Sharjah Police arrested a 5-member gang after they fraudulently took possession of an Emirati man’s car worth Dhs250,000. Chequebooks belonging to a number of UAE banks and used for their operations as well as business seals, personal signatures and a counterfeit money detector were seized in their possession.

The case dated back to a complaint filed by an Emirati man with the Industrial Areas Comprehensive Police Station in which he said a man offered to buy a Land Cruiser 2020 for Dhs250,000 and signed a cheque with the price but requested to examine the vehicle and try it for two hours as agreed in the contract of sale. The buyer, however, took possession of the vehicle and shut down his mobile phone, and the complainant realized then that he fell victim to a fraud.

Colonel Omer Ahmed Abul Zoud, Director of Criminal Investigation Department, said as soon as the complaint was received, the necessary measures were taken and the information gathered within a short period showed that the gang, which consisted of five Arabs, used to meet somewhere in Ras Al Khaimah before moving from one place to another using personal contacts to allocate tasks among them.

Following prior co-ordination with the Ras Al Khaimah Police and after taking all legal measures, the Sharjah Police detectives managed to arrest the gang members one after the other in tight traps and recover the stolen vehicle before being disposed of, Abul Zoud said.

On interrogation, the fraudsters confessed to having been involved in the case and to receiving their shares, each as per the role assigned to him, he added, noting that they were then referred to the Sharjah Public Prosecution.

Abul Zoud called on the public to avoid dealing with unidentified persons, stressing the necessity for them to request their identification papers, especially in buying and selling operations so as not to fall victim to fraudsters.

According to Abu Al Zoud, the house owner, who discovered that his trailer and trip gear had been stolen, checked the surveillance cameras to find that the theft took place in the early morning.