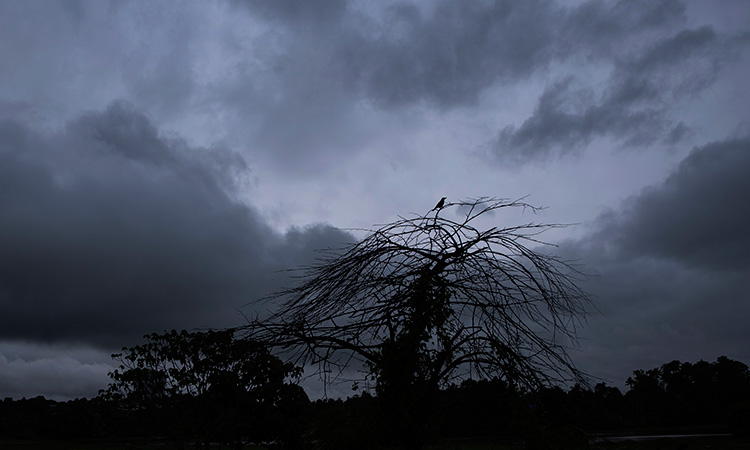 A bird perches on a tree as rain clouds cover the sky in Kochi, Kerala state, India, on Saturday. AP

At least eight people have died and a dozen are feared missing after heavy rain lashed Indian state of Kerala since Friday evening.

A team of Army officials attached to the Pangode Military camp in the state capital has already left to Kottayam district and is expected to arrive shortly where a landslide took place at Kootikal.

The National Disaster Response Force and the Indian Army deployed teams to help with rescue efforts in two of the worst-hit districts, Kottayam and Idukki, where a dozen people are still feared missing. 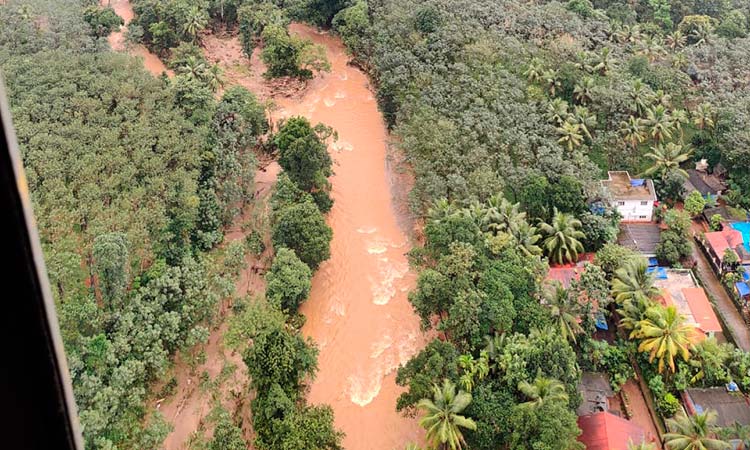 This photo shows the scene after a landslide in the western mountains in Kottayam, Kerala, India, on Sunday. AP

Two families comprising 12 people who bore the major brunt, of which six people have been declared dead, while four continue to be missing.

A car with two people who were asked not to go forward near Thodupuzha in Idukki district was swept away by the gushing waters and a few hours later the dead bodies were recovered by the locals who swung into action.

On Saturday, when the heavy rain began, television reports showed people wading through chest-deep waters to rescue passengers from a bus that was nearly submerged by the torrents flooding the roads.

Consequent to the rains the authorities have issued a red alert in 6 districts while another 6 districts are on orange alert and two districts are under yellow alert, thereby indicating that all the 14 districts in the state are experiencing heavy rains. 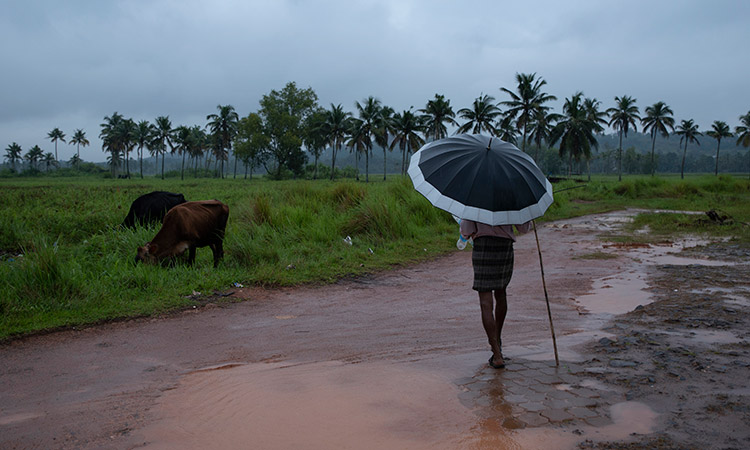 A man holds an umbrella and keeps a watch on his grazing cows on a rainy day in Kerala, India, on Saturday. AP

Heavy rains have been lashing the state starting Friday evening leaving roads at several places flooded and normal traffic affected at a number of places.

The Indian Meteorological Department has warned of more rains on Sunday also.

Chief Minister Pinarayi Vijayan on Saturday morning issued an advisory that people have to be extremely cautious and under no circumstances should they ignore the warnings that are given from time to time.

"A 24 hour alert has to be observed and all those living close to water sources have to be very cautious and none should venture in the waters. Travel in the hilly areas or places where rains are occurring should be best avoided and areas prone to landslides have also to be watchful," said Vijayan.

State Ministers have been asked to coordinate with the various teams of the Police, Fire Force and the Disaster Management teams and have started their work.