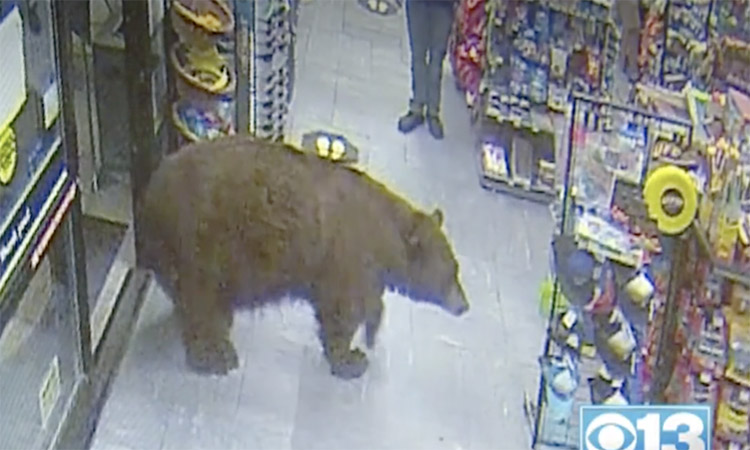 A black bear was caught on video entering stores in Kings Beach in 2020. Photo by California Department of Fish and Wildlife

A hungry black bear known for rummaging through California stores that was caught on video snacking on food in shops near Lake Tahoe was shot and killed over the summer when it refused to leave a California campsite, authorities said.

Kings Beach Bear — also known as the Safeway Bear — was shot in early August in Alpine County near the Nevada border, after a family was unable to chase the bear away, the California Department of Fish and Game announced on Thursday.

The roughly 15-year-old male bear first made the news last year when it was recorded inside a Safeway and a Chevron convenience store as well as in other stores on Lake Tahoe’s North Shore.

The 500-pound bear also was know for "crashing Kings Beach get-togethers, helping itself to birthday cakes and other treats and prompting widespread concern," the agency said in a statement.

In September 2020, it was trapped, given ear tags and a GPS collar and relocated to a wilderness area in El Dorado County, according to The Associated Press.

"In a best-case scenario, the bear successfully transitioned to a natural diet and life in the wild, losing winter weight that allowed the GPS collar to come free," and the collar was found this spring, the agency said.

But the bear's fate was more tragic.

It was shot after repeatedly approaching the Sierra Nevada campsite of a large family with many small children despite several attempts to haze it or shoo it away, the agency said.

The animal "was a shell of its former self, completely emaciated, its teeth rotten,” the wildlife agency statement said.

"As one CDFW biologist later said, ‘Ultimately, the actions of the shooter was the most humane outcome for this bear,' ” the statement said.