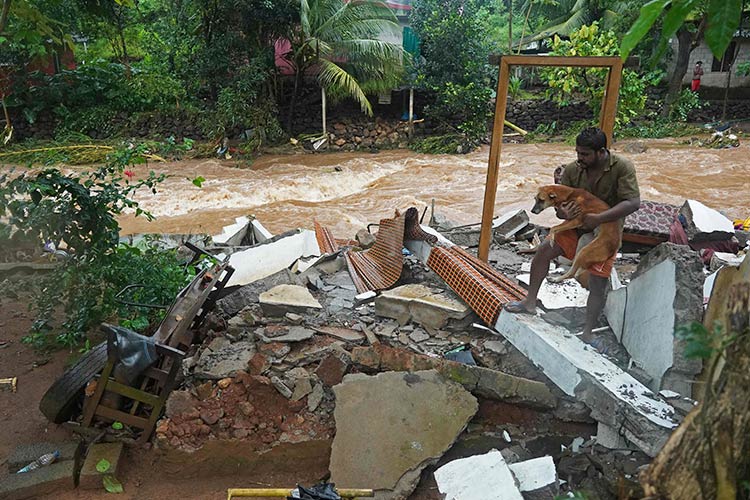 A resident carries a dog amid debris of his damaged house in Kerala. AFP

Heavy rain lashed Kerala on Saturday triggering landslides and flood in some places which claimed 8 lives, apart from causing widespread damage. According to reports, 4 people were missing following landslip in Koottikkal in Kottayam district. The downpour was caused by the Low Pressure area formed over the Arabian Sea.

Chief Minister’s Office sought the help from the Air Force and Army to aid and assist rescue operations.

A defence spokesperson said the Indian Air Force and Indian Army stationed in Kerala have deployed their personnel in affected areas.

The chief minister also said a Red alert has been sounded for the dams under KSEB, including Kakki dam in Pathanamthitta, Sholayar in Thrissur, Kundala and Kallarkutti in Idukki.A red alert was also issued for the Chulliyar dam in Palakkad and the Peechi dam in Thrissur, which fall under the irrigation department. Minister for Cooperation and Registration VN Vasavan told media persons that at least three houses have been washed away in Kottayam district and 10 people were feared missing.

“At least four landslides have been reported in various parts of Kottayam district.We asked for help from the air force to rescue those stranded in the Koottikkal area.We have received information on some missing persons and more than 60 people waiting to be rescued as water entered their homes, ”the minister said.

Over 30 families have been shifted to relief camps as water level rose in the Vellayani Lake in Trivandrum district. Shutters of Malampuzha dam and Malankara dam were raised following the rise in water levels. Three shutters of the Thenmala Parappar dam were raised by 50 centimetres each. 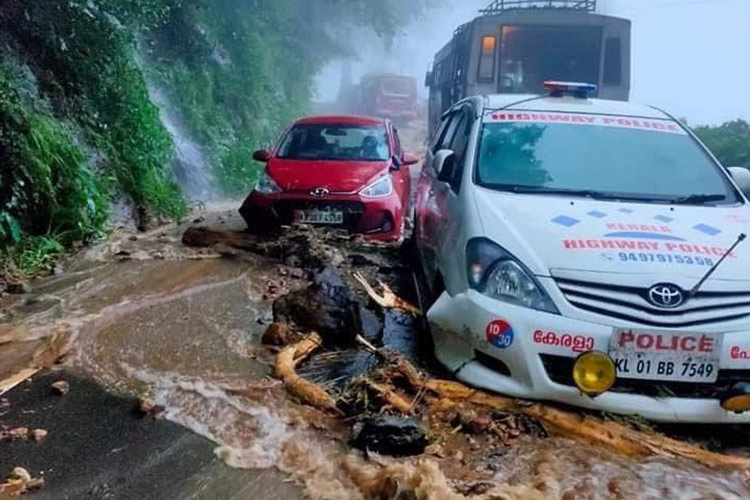 Cars stuck on a road after a landslide in Kerala.

In Kannur and Kasaragod districts, Yellow Alert will be in force. A landslide was reported in Poovanchi, near Kokkayar panchayat in Idukki district in which three houses were swept away and 12 people were missing.

Water levels rise steadily in many rivers, including Meenachal and Manimala. The Kerala State Disaster Management Authority has advised people in the southern and central districts to exercise extreme caution.

Thunderstorm accompanied by lightning is also likely in isolated places.“Mi17 and Sarang Helicopters are already in standby mode to meet the requirements.

All Southern Air Command bases have been placed on high alert in view of the weather situation in Kerala, ”the spokesperson said in a statement.

Minister for Revenue K Rajan called a meeting of district Collectors via online on Saturday to coordinate with disaster management programs and take stock of rain damage across the state. Minister for Health Veena George convened a virutal meeting of MLAs at the collectorate in Pathanamthitta.

The deceased include Koothattukulam native Nikhil, 27, and a girl whose identity is yet to be established.

India's meteorological department warned of heavy rains spread across the state due to low pressurearea formed over the Arabian Sea and issued a red alert for five districts of the state.