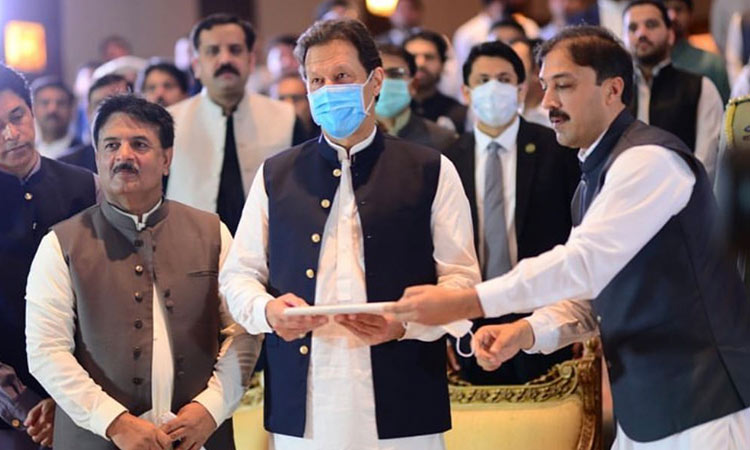 He told the launching ceremony that the government was helping small farmers because "when you help them, you help all of Pakistan.” He explained that the Kisan card would enable small farmers to get direct subsidies, and directly receive money for subsidised soil and pesticides as well as in cases of emergencies.

"Small farmers will now have insurance that will enable banks to give them credit, which they did not do in the past,” he added.

Imran stated that labourers and farmers are the hardest working people in society who have to endure all weathers and face a myriad of issues, adding that helping them will make the Almighty happy.

"Our government has led a movement of justice,” he said, alluding to his party’s name — the Pakistan Tehrik-e-Insaf (PTI). He said that it is the weak who need justice most.

He said that it was important to help small farmers as they must sell their products in the market for cheaper, and sell more produce as opposed to big farmers who are able to store their crops.

The prime minister reiterated that small farmers work the hardest and face several difficulties, which is why he wanted to "help and uplift them.”

He said the PTI government wanted to give farmers full compensation for their product — the money that they can put towards their land, thus increasing crop yield.

"What you are seeing right now is just a small amount of justice, they are only getting paid what they deserve. However, we still have to help them a lot,” he said.

Imran emphasised the importance of research - such as seed development — claiming that production cannot be increased without it.  "We used to have the Faisalabad Agriculture University which produced high-quality research, but as less money was spent on it, the research ended,” he said, adding that countries that spend on research have better produce.

He lamented over the state of the dairy industry, stating that it "pained” him that Pakistan imported dry milk despite having an abundance of cattle. "It is so easy to increase the yield; we simply have not conducted research or worked hard,” he said.

Imran discussed the ongoing water problem, claiming that water needed to be stored to be used by farmers, adding that no one thought about storing water. "Dams are being built in the country after 50 years; they will be built in the Sulaiman and Karakoram Mountain ranges,” he said.

"We need to use our minds, employ modern techniques, and increase water reservoirs instead of using techniques that we have been using since Mohenjodaro,” he added.

The prime minister stated that the Sehat Card — which allows every family to have Rs1 million for health insurance — will greatly benefit all small farmers.

The premier briefly mentioned that imports have grown 53% in the past year alone and that the "temporary" pressure on the rupee was because Pakistan imported things such as wheat, sugar, palm oil and lentils. "We are trying to produce the things we import,” he said. "We need to increase food production by helping farmers, as our population is also increasing.”