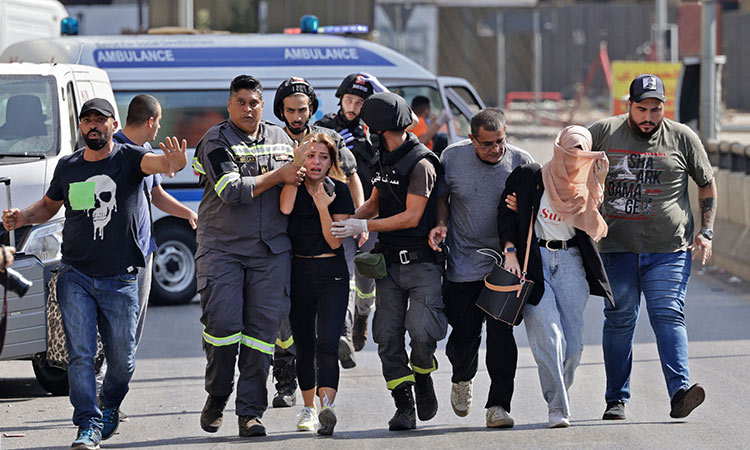 Lebanese medics help evacuate civilians during clashes in the area of Tayouneh on Thursday. AFP

Armed clashes erupted on Thursday in Beirut during a protest organised by Hizbollah and its allies against the lead judge probing last year’s blast in the city’s port. At least six people were killed and dozens were wounded in the most protracted and violent street fighting in the city in years, authorities said.

President Michel Aoun confirmed his communication with the Prime Minister, the Ministers of Interior and Defence and the Army Commander to calm the situation.

The army deployed tanks and troops to quell the street battles that sparked memories of the 1975-1990 civil war for a city already traumatised by last year's blast disaster and Lebanon's worst-ever economic crisis.

The bloody unrest, in which the sound of automatic gunfire and grenade blasts mixed with the wail of ambulance sirens, broke out after shots were fired at a demonstration by Hizbollah and Amal movements. 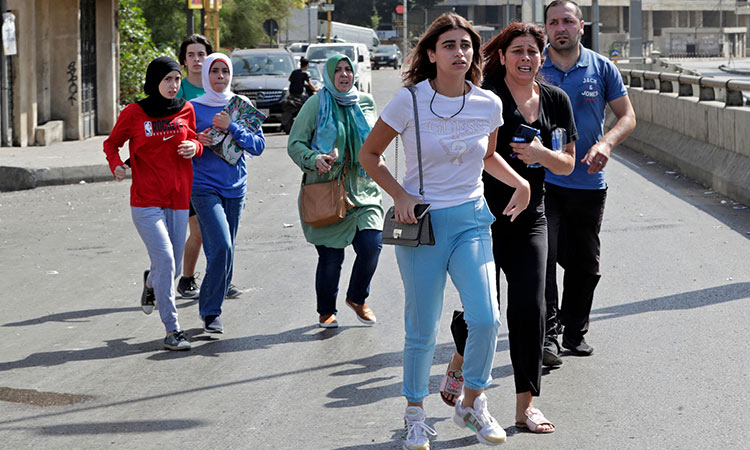 Civilians evacuate their homes during clashes in the area of Tayouneh. AFP

The protesters were rallying against judge Tarek Bitar, tasked with investigating the massive ammonium nitrate explosion at Beirut's port that killed more than 200 people and destroyed swathes of the capital on Aug.4 last year.

The judge had in recent days been in the sights of Hizbollah and Amal in particular for insisting on subpoenaing top officials in his probe.

Local media circulated video clips showing armed men shooting in the streets. The Lebanese army announced that "during protesters heading to the Adliya area, they were subjected to bursts of fire in the Tayouneh area — Badaro, and the army rushed to cordon off the area and deployed in its neighborhoods." 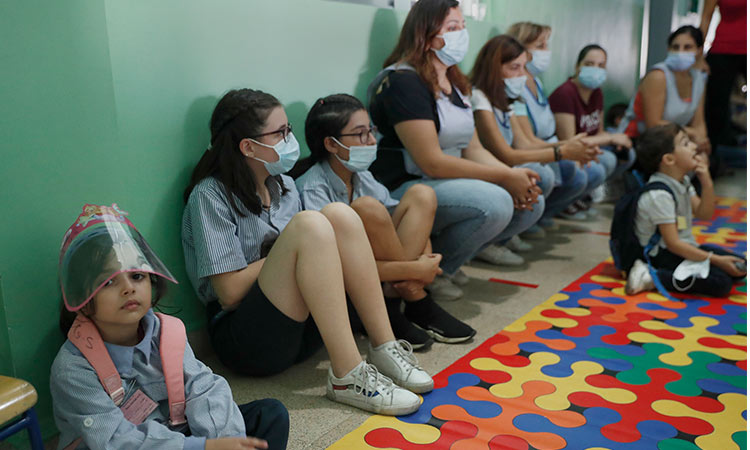 Students and teachers sit on the floor in a school corridor after deadly clashes erupted. AP

"I can't handle these loud sounds, especially the RPGs," said one resident trapped in the combat zone in the city's southern Tayouneh area, who gave his name only as Samer.
"It's the trauma of the Beirut blast coming back all over again."

Interior Minister Bassam Mawlawi said the "exchange started with sniper fire, with the first casualty shot in the head." He said at least six people were killed, all by gunfire, without specifying who fired the shots. The Lebanese Red Cross put the number of wounded at 30. 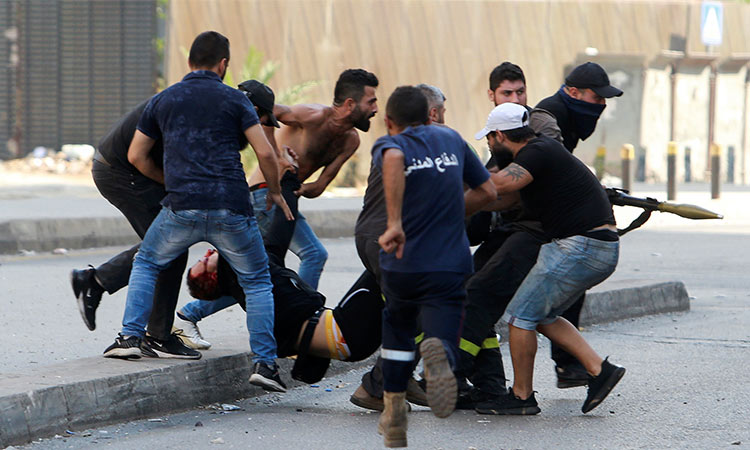 People evacuate a casualty after gunfire erupted in Beirut. Reuters

In the chaos, bullets smashed into houses and left craters in the walls of buildings, while many panicked civilians were trapped in their homes. Among those killed was a 24-year-old who was hit in the head by a stray bullet inside her home, a doctor at Beirut's Sahel hospital said.

Heavy fire rang out as ambulances rushed the wounded through the deserted streets, a few blocks from the Palace of Justice, where the protesters had rallied. 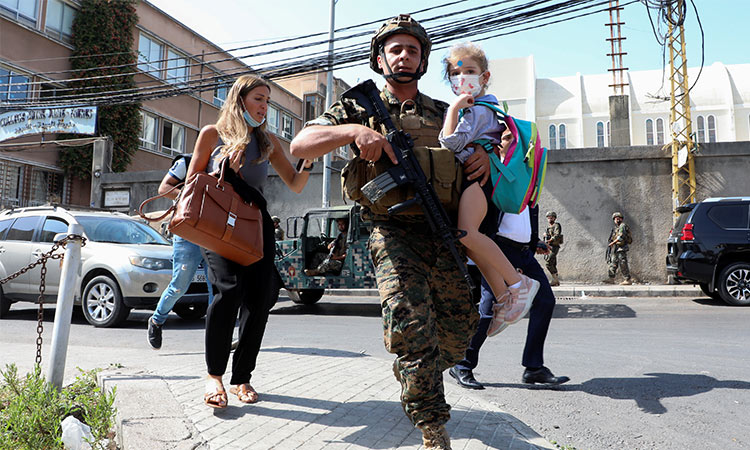 An army soldier carries a schoolchild as civilians flee after gunfire erupted in Beirut. Reuters

The army made some arrests as they raided residential buildings looking for those behind the sniper fire, AFP correspondents said.

'Right to the truth'

In the chaos, residents cowered in corridors away from windows, as some were shattered by the gunfire.  A limp body lying on a main street was carried away by rescuers as gunfire rained down around them. 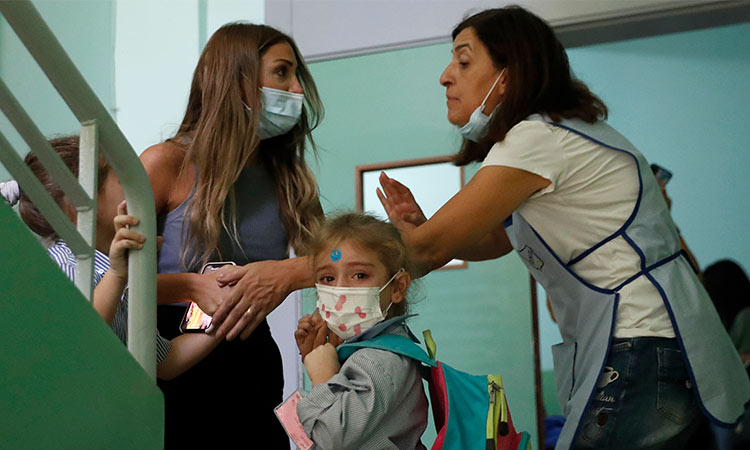 A teacher asks a mother who came to evacuate her children from a school not to go out, after deadly clashes in Beirut. AP

Pictures shared on social media showed school children ducking under desks and on the floor outside classrooms. 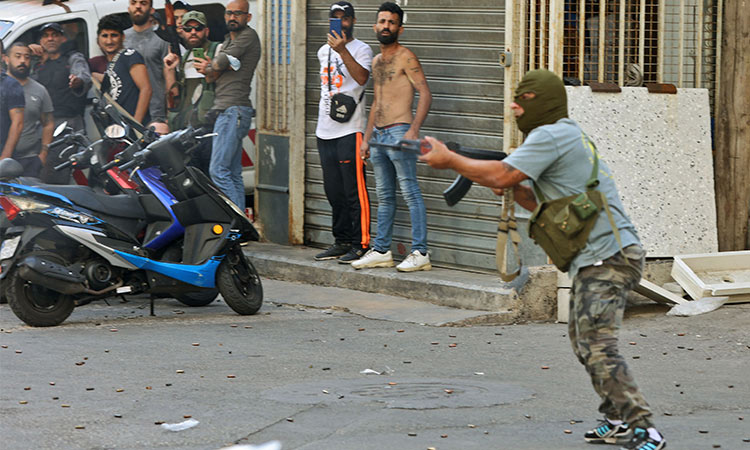 A fighter takes aim during clashes in the area of Tayouneh. AFP

Maha Yahya, director of the Carnegie Middle East Center, called the violence "a horrific reminder of unhealed wounds" from the civil war.

One social media user wrote that "Beirut now is similar to the Beirut of my childhood." 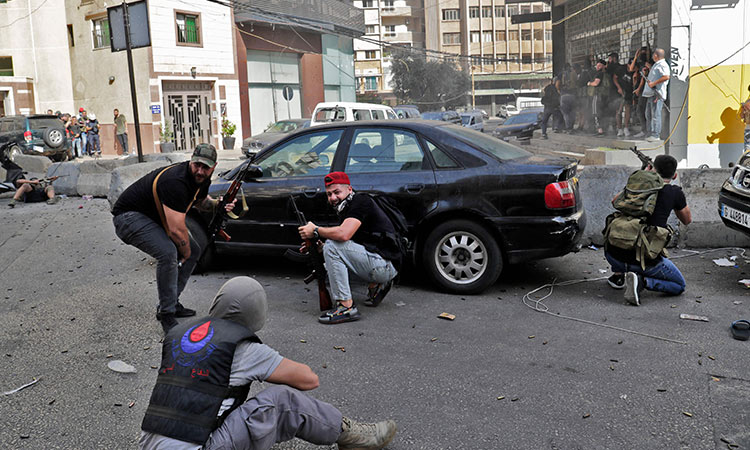 Fighters from Hizbollah and Amal movements take aim during clashes in Tayouneh. AFP

The man at the centre of the tensions, Bitar, is seen as a last hope for justice by many Lebanese but has been condemned as biased and corrupt by political leaders. Bitar has sparked deep divisions within the government between those who want to keep him and those who want to oust him. 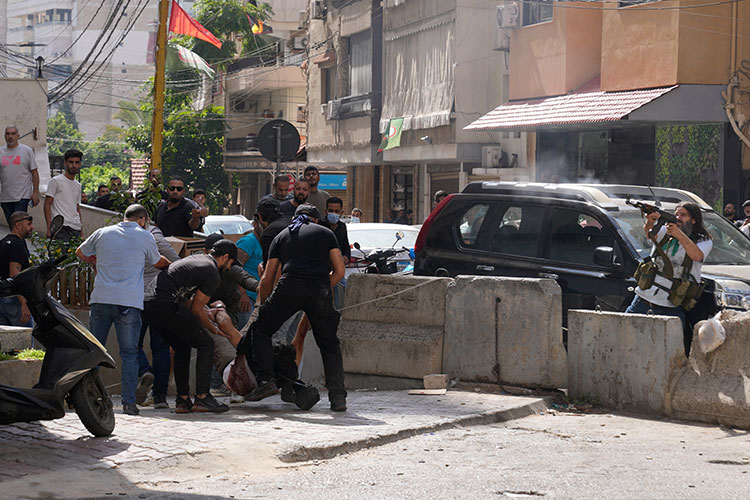 Supporters of Hizbollah help an injured comrade during armed clashes in Dahiyeh. AP

The protesters on Thursday torched portraits of Bitar but also of US ambassador Dorothy Shea, charging that the judge is colluding with Washington, on the day senior American diplomat Victoria Nuland was visiting Lebanon.

The Court of Cassation on Thursday turned down a lawsuit filed by two ex-ministers demanding Bitar's replacement, a court official told AFP on condition of anonymity.