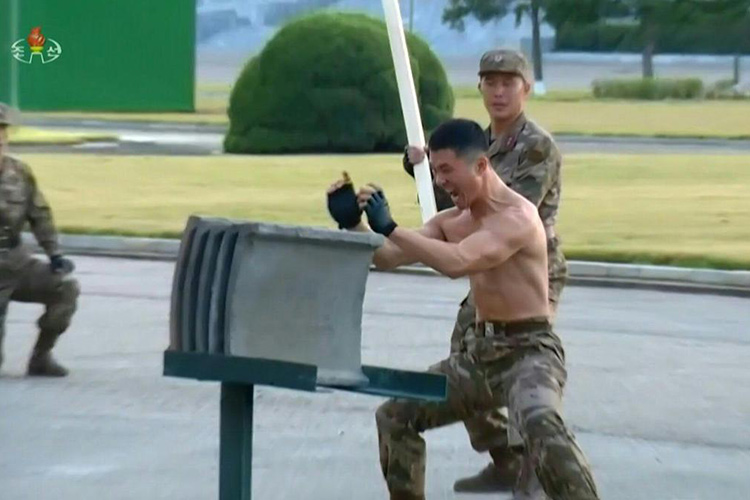 In the presence of North Korean leader Kim Jong Un and his sister and adviser Kim Yo Young, soldiers displayed a martial arts exhibition dedicated to defence.

A smiling Kim watched a man lying on broken bottles with a concrete block resting on his chest before it was smashed with a hammer, according to images broadcast by state television on Tuesday.

“These soldiers, who were incubated and trained by our Party, showed the whole world strength, courage and morale of the Korean People's Army,” said Ri Chun, famous television presenter and spokesperson for the regime.

She stressed that the participants drew their strength from “our dear leader Kim Jong Un.

This comes as part of a "resistance show" organised by the North Korean army during this defense exhibition, which constituted an occasion to present the weapons of this nuclear state, including the ICBM which was revealed last year during a military parade.

Other soldiers, some wearing military uniforms and others shirtless, broke several layers of bricks with fists or the head, and others were beaten with hammers on the arms or hands.

The North Korean leader followed the show, applauding and smiling, and was surrounded by officers and his sister Kim Yo Jong, appointed at the end of September to head the country's highest executive body.

North Korea has a long history of martial arts for self-defense, and was first and foremost the birthplace of Taekwondo, the art of self-defence.

Opening the exhibit on Tuesday, the North Korean leader said the United States was the "root cause" of the instability on the Korean Peninsula.

The parade was held on the anniversary of the founding of the ruling party in Pyongyang.