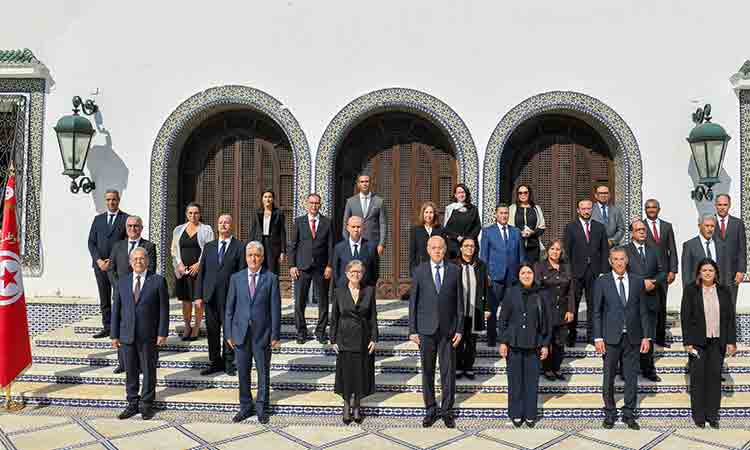 President Kais Saied poses with members of the new government in Tunis on Monday. Reuters

Tunisia got a new government on Monday after more than two months without one, with the new prime minister naming her cabinet, which includes a record number of women.

The ministerial appointments announced by Prime Minister Najla Bouden filled a vacuum that had persisted since President Kais Saied abruptly dismissed his former cabinet and suspended parliament 11 weeks ago, concentrating all executive powers. His critics and constitutional lawyers have likened his actions to a coup in the North African nation.

“I am confident we will move from frustration to hope," Saied said at the ceremony to swear in the government. The period of exceptional measures would continue "as long as there is an imminent danger," he added.

Bouden, named Sept.29 by Saied as Tunisia’s first female prime minister, said during the swearing-in ceremony of her new ministers that their main priority would be fighting corruption. 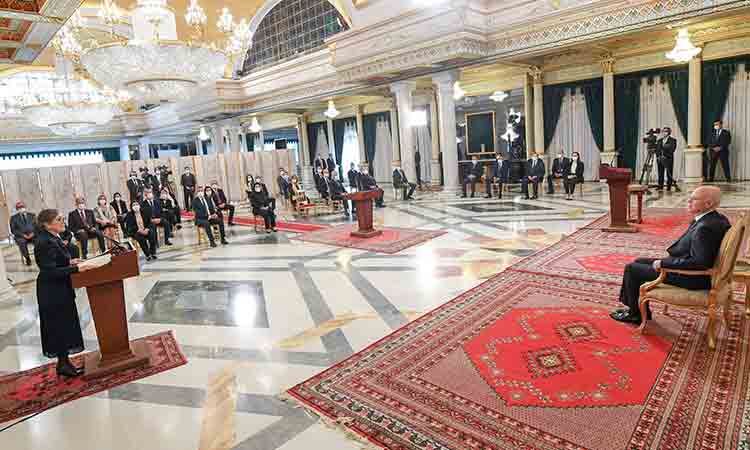 The new cabinet of 24 ministers and a secretary of state has an unprecedented 10 women, including the prime minister. They include Leila Jaffel, new at the Ministry of Justice, and Sihem Boughdiri Nemseya, reappointed as finance minister.

The president on Monday said he would "make efforts in the coming days" to launch a "genuine national dialogue" involving Tunisians from across the country.

Feminist groups have hailed Bouden's nomination as a step forward for women in Tunisia, seen as a pioneer for women's rights in the Arab world.

But many have questioned how much power she will have given that Saied — who has long opposed gender equality in inheritance laws -- will have the final say in government decisions.

Ennahdha slammed her nomination by presidential decree as "unconstitutional."

Tunisia's powerful UGTT labour union also welcomes the formation of a new government and calls on President Kais Saied to start a participatory dialogue and set a time limit on the emergency period, a UGTT official said.

Saied had previously promised a new government in July. But he then partially suspended the constitution on Sept. 22 and gave himself the power to rule by decree. He has argued that pandemic-hit Tunisia is in crisis and has described the measures as temporary, although he said Monday that they "will remain in force for as long as the peril is real." 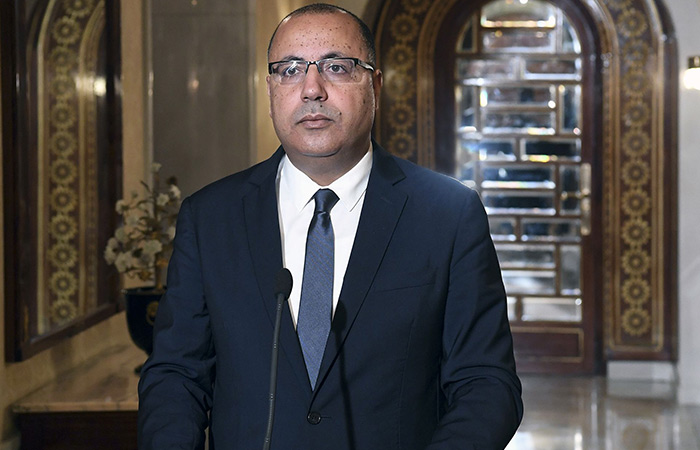 The 46-year-old lawyer succeeds Elyes Fakhfakh, who resigned as prime minister earlier this month — but HIchem Mechichi was not one of the names proposed by the ruling political parties to President Kais Saied.