VIDEO: ‘Thousands of dollars’ found dumped in a garbage container in Lebanon - GulfToday

VIDEO: ‘Thousands of dollars’ found dumped in a garbage container in Lebanon 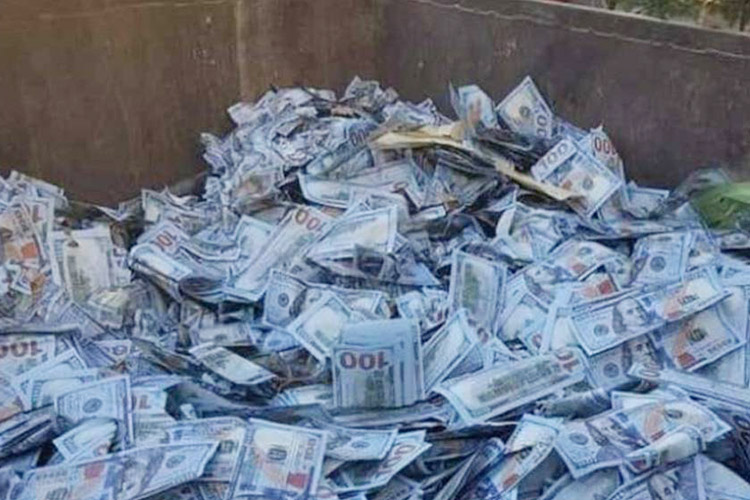 Thousands of fake Lebanese dollars seen inside a garbage container.

A Lebanese village was preoccupied with a video clip that spread on social media, showing thousands of counterfeit dollars in a garbage container.

The cleaners in the village of Sin el Fil in Lebanon woke up to a surprise that amazed them.

Instead of rubbish, the waste container was filled with hundreds of fake dollars, which prompted the cleaners to contact the concerned authorities.

And soon, a video clip of the dollars spread, questions about who had thrown them?

According to local media, the mayor of Sin El Fil, Nabil Kahala, said: What happened is true, but these are fake dollars. Rather, they are forged, and are plain papers on which a picture of the hundred-dollar banknote is printed, and have been reproduced thousands of times in the form of a photo strip.

He added: "It was a strange morning. At half past seven on Monday, I woke up to the phone ringing, and someone told me that Sin El Fil had been drowning in thousands of dollars. We realized how serious it was."

He continued, "However, we soon discovered that they were ordinary papers on which a picture of the $100 bill was printed, expecting that it would belong to one of the institutions concerned, for example, with filming a movie or something similar, according to the type of attached papers."

He added, "The container was parked in an area devoid of residential buildings, and therefore there are no surveillance cameras. The area is known as Dahr El-Gamal, which is completely parallel to the course of the Beirut River."

Kahala indicated: "We soon informed the Internal Security Forces, which in turn raised the matter to the Public Prosecution to follow up the investigation of the event that was buzzing with the media and social networking sites, and based on this matter, the security forces received the file and began their investigations to find out the source of these notes and how they reached the container."

It is noteworthy that private waste companies work in Beirut to empty waste containers in all regions, and that the workers of these companies are the ones who found the papers and took pictures that spread remarkably with sarcastic comments at times.

Beirut residents have been living in the dark after the state electricity grid’s failure.