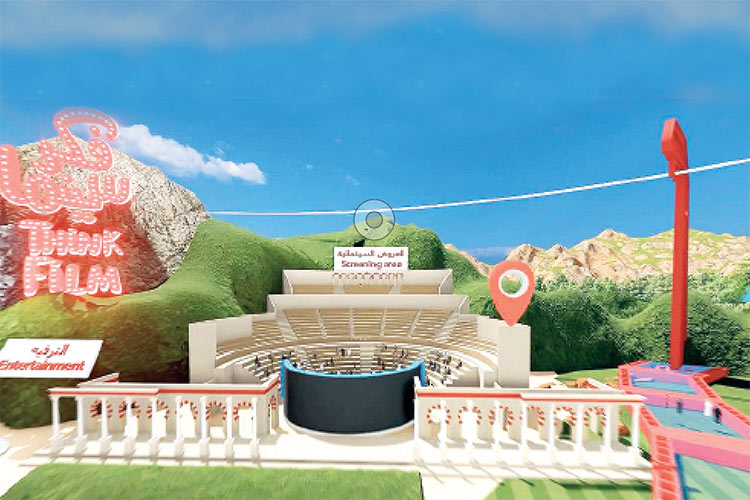 The platform will inspire audiences of all age groups.

The 3D platform is a major attraction of SIFF 2021 on which all its events, workshops and film screenings will be held.

The platform will inspire audiences of all age groups with another special feature – high-quality virtual reality journeys of Sharjah’s iconic architectural landmarks and diverse natural landscapes comprising seas, mountains, and the desert. The iconic Greek-inspired Khorfakkan Amphitheatre will form the backdrop of the festival’s main cinema and mini cinema.

The site’s visitors will be able to embark on inspiring virtual journeys to explore the SIFF Fame exhibition which showcases the creative works of FUNN’s students – an experience that will be made more memorable set  in the House of Wisdom premises.

The six-day festival that aims to stimulate imagination, showcase the cinematic voices of young filmmakers from around the world and train future generations in the field of media arts, will come to life on this stimulating virtual platform.  This includes a fully equipped information desk, an entertainment hub which includes two games: Trivia Quiz Mania, a fun way to test – and gain – knowledge across five categories – movies, music, technology, sport, celebrity, and history; and Virtual Photo Booth, where they can choose from three experiences – Photo, Boomerang or GIF – to create fun e-cards to share it on their personal social media accounts.

Apart from kids and youth studios where the workshops will be held, will also be easily accessible to the 3D platform’s browsers.

Organised by FUNN – Sharjah Media Arts for Youth and Children under the theme ‘Think Film’, SIFF 2021 will be showcasing a selection of more than 80 films from 38 countries, paired with a diverse programming agenda comprising expert-led workshops in both Arabic and English, stimulating panel discussions, and more. To attend SIFF 2021 workshops and discussions, and watch a host of interesting cinema, visit  www.siff.ae

SIFF 2021 will be screening 6 films making their world premieres, and four that are being screened for the first time for UAE audiences. The festival will also be the launch pad for 34 films in the Middle East, as well as 4 in the GCC circuit.

Being organised by FUNN - Sharjah Media Arts for Youth and Children in a fully online format this year, SIFF will be streaming more than 80 diverse films across six days. The films are free to watch and can be accessed by registering at: www.siff.ae.

Two homegrown films, Childhood Trauma by UAE-based Safa Azarayesh that compel us to connect the dots of childhood trauma with adulthood and is competing in the GCC Short Films category, and Sarah Al Ali’s Don’t Give Up that reinforces the need to persevere even when things seem difficult – headline the six films that will have their world premieres at SIFF 2021.

The other four include: The First Line, in Russian by Kate Bugrova; the Arabic film Opportunity by Saudi Arabian Fahad Alotaibi, which narrates a game of life and death; the emotionally resonant Persian film, Sweet Taste of Darkness by Mitra Raeesmohammadi; and Kazakh film Shoqan that explores the reality of truth, and directed by Kuka.

Last Round, an animated short that has been gaining fame and popularity for its universal story of sibling love, is among the 34 films that are having their Middle East premiere at SIFF this year.

A graduation project by Anatole Bournique, Maeva Chaulvet, Katia Hochstetter, Nicolas Jaffre, and Thais Mercier, students of the Goerges Melies School of Animation, France, the film narrates the story of a promising young boxer who is willing to do anything to finance the future of his little sister, a piano prodigy.

People from around the world flock to the virtual theatres of the 8th Sharjah International Film Festival for Children and Youth (SIFF 2021) to relish 80+ high-quality films that bring together a diversity of creative voices to tell the stories of the younger generation.

Organised jointly by the Sharjah Government Media Bureau (SGMB) and Sharjah Children, the tour enabled the young visitors to explore the vast, open-air venue which can accommodate 3,600 people and offers panoramic views of the stunning Khorfakkan corniche.