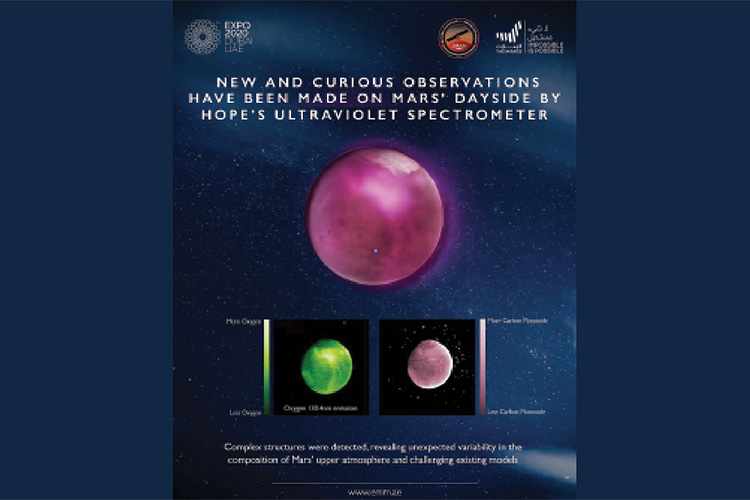 The Hope Probe discovered larger than expected quantities of oxygen in the Red Planet. WAM

His Highness Sheikh Mohammed Bin Rashid Al Maktoum, Vice President and Prime Minister of the UAE and Ruler of Dubai, announced that the UAE started sharing the scientific data for Mars that it obtained through the Hope Probe with other research centres worldwide, noting that the Probe discovered larger than expected quantities of oxygen in the Red Planet.

Sheikh Mohammed posted a photo of Mars on Twitter and commented on it as saying: “A photo taken by the Hope Probe for the spring season in the northern part of the Mars. Today, the UAE started sharing the scientific data it obtained with other research centres worldwide, as larger than expected quantities of oxygen were discovered in the planet.”

The Emirates Mars Mission, the first interplanetary exploration undertaken by an Arab nation, on Saturday released unique new images of Mars that challenge our existing conception of how the planet’s atmospheric gases behave and interact.

Taken by the Mars Hope Probe’s EMUS instrument, the observations show dramatic variations in the concentrations of both atomic oxygen and carbon monoxide in the dayside atmosphere of Mars.

“These observations contain features that were completely unexpected and we believe will have far-reaching consequences for our existing models of the Martian atmosphere and our understanding of its behaviour. We simply hadn’t anticipated structures of this magnitude and complexity,” said Emirates Mars Mission Science Lead Hessa Al Matroushi.

The observations confound scientist’s preconceptions of the distribution of ultraviolet light emitted from the upper atmosphere of Mars, showing vast structures at a range of wavelengths suggesting a higher than expected variation in the density of atomic oxygen and pointing to unusual levels of atmospheric turbulence.

Taken at a time when Mars was near the aphelion of its orbit (furthest from the Sun) and when solar activity was low, the images are at their most striking and remarkable in emissions from oxygen at the 130.4 nm wavelength.

“It was so unexpected that we initially thought the structures might be artefacts in the image, caused by contaminating light from longer wavelengths that the instrument is designed to reject,” said EMM Deputy Science Lead Justin Deighan.

“We had expected to observe a relatively uniform emission from oxygen at 130.4 nm across the planet and yet here we are, faced with unpredicted variations of 50% or more in the brightness. The science team is currently refining their models to come up with a robust interpretation of these findings. It’s very exciting to be challenged this way; this is exactly the type of science the mission was designed to pursue.”

One of three instruments on board the Mars Hope Probe, EMUS’ principal science goal is the measurement of oxygen and carbon monoxide in Mars’ upper atmosphere and the variability of hydrogen and oxygen in the exosphere. EMUS (Emirates Mars Ultraviolet Spectrometer) is the most sensitive ultraviolet instrument yet to orbit Mars.

“We have been refining our processing pipeline, readying for our first science data release to the global science community, which took place as scheduled on the first of October,” commented Al Matroushi.

“These observations, and our previously announced observations of Mars’ discrete aurora will form part of that initial data release, which includes observations made by Hope between 9 February to 22 May 2021. From now onwards, we will be releasing new data sets every three months without embargo and free for use to the community.”