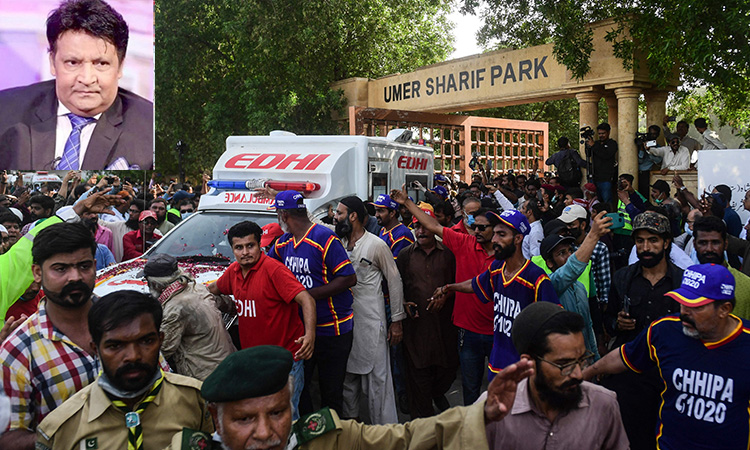 An ambulance carries the body of Umer Sharif (inset) for the funeral prayer in Karachi on Wednesday. AFP


Funeral prayers of legendary comedian Umer Sharif were offered on Wednesday, hours after his body reached Karachi from Germany. The prayers were led by Allama Bashir Farooqi and were attended by a large number of people, including political and social leaders, as well as people from the entertainment industry.

He was buried in the cemetery adjacent to the shrine of Hazrat Abdullah Shah Ghazi.

According to reports, the funeral prayers were supposed to be offered at 3:00pm, however, they got delayed as throngs of people kept making their way to attend the veteran comedian’s last rites.

According to police, special security arrangements had been made for the occasion. More than 200 police personnel were deployed on security duty.

“Security was also beefed up on the route from Umer Sharif Park, Clifton to Abdullah Shah Ghazi’s shrine. Funeral prayers were held at the park where a bomb disposal squad was also deployed,” a senior police officer said. 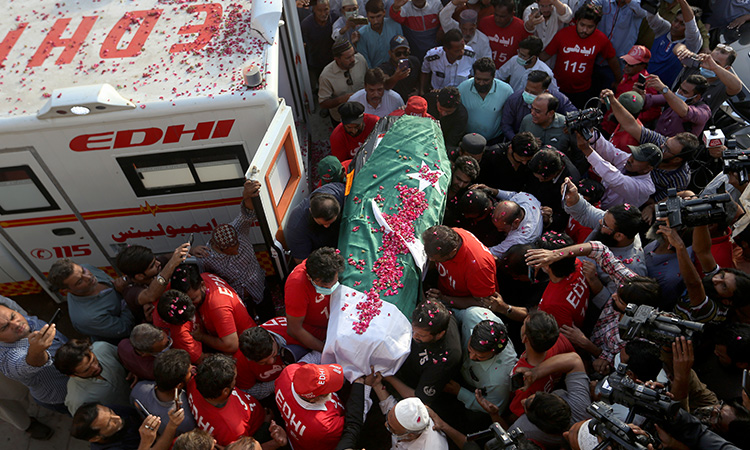 Volunteers transport the national flag-wrapped casket of Umer Sharif for the funeral prayer in Karachi. AP

Earlier during the day, Sharif’s body was handed over to his family after it reached Karachi from Germany via Turkish Airlines flight TK708.

The comedian was diagnosed with multiple ailments, including coronary conditions. Three days after his stay in Germany, he was expected to resume his travel to the US for medical treatment. However, a couple of hours after his dialysis, he suffered a heart attack that took his life. Umer Sharif was aged 66 at the time of his death. Sharif was born on April 19, 1955, to an Urdu-speaking family in Liaquatabad, Karachi. The star was well-acclaimed as one of the biggest comedians in Asia.

The artist was set to resume his journey to the United States for medical treatment three days after his stay in Germany. He was admitted to a hospital in Germany’s Nuremberg on Sept.29 as his health condition deteriorated during the flight to the US.