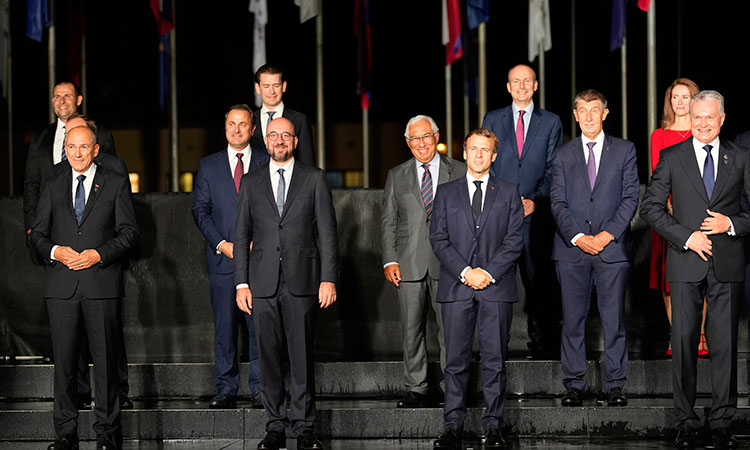 European Union leaders pose during a group photo at a summit in Kranj, Slovenia, on Tuesday. AP

European Union leaders met for the first time on Tuesday since the messy Western troop withdrawal from Afghanistan and France's loss of a multibillion-dollar submarine deal with Australia, events that they argue have exposed Europe's need for more autonomy on defence.

Leaders meeting over dinner in Slovenia on Tuesday split into classic divisions of eastern states fearful of Russia and wanting to strengthen Europe within NATO and those led by Germany, Italy, Spain and France that want a more robust EU capability, two diplomats briefed the media.

Meanwhile, EU leaders failed to overcome divisions over whether to develop an independent defence force despite anger at the chaotic withdrawal of Western forces from Afghanistan and new impetus from France after it was excluded from a US geostrategic pact. 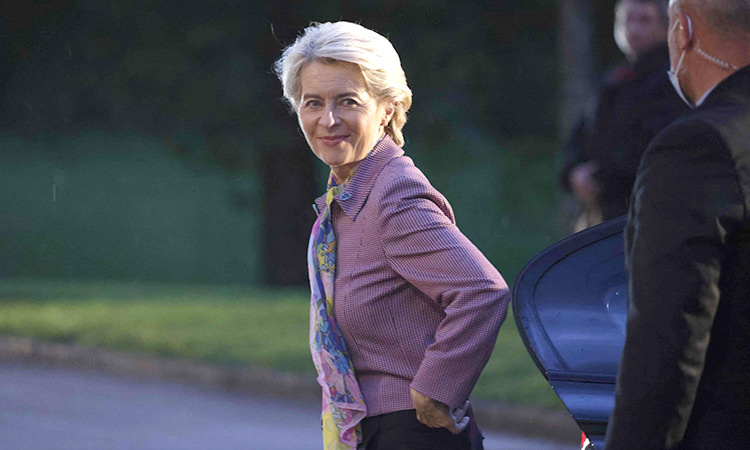 "Drawing the lessons of recent crises, we are committed to consolidating our strengths and strengthening our resilience by reducing our critical dependencies," EU Council president Charles Michel said after the meeting. "To become more effective and assertive on the international stage, the European Union needs to increase its capacity to act autonomously."

The Taliban’s takeover of Afghanistan and the rushed airlift operation that followed the US decision to pull out have laid bare the EU’s dependency on its ally. Without American support, European countries wouldn’t have been able to guarantee the safe exit of their citizens or even their troops this summer.

Before the closed-door dinner in Brdo Castle outside the capital Ljubljana, French President Emmanuel Macron told reporters that the 27-nation bloc must do more to manage crises on its borders and to be responsible for its own security.

The EU leaders will be joined by the six Balkan leaders of Serbia, Montenegro, Bosnia, North Macedonia, Kosovo and Albania on Wednesday, part of the bloc's decades-long strategy to create a "ring of friends" from southeastern Europe to North Africa. 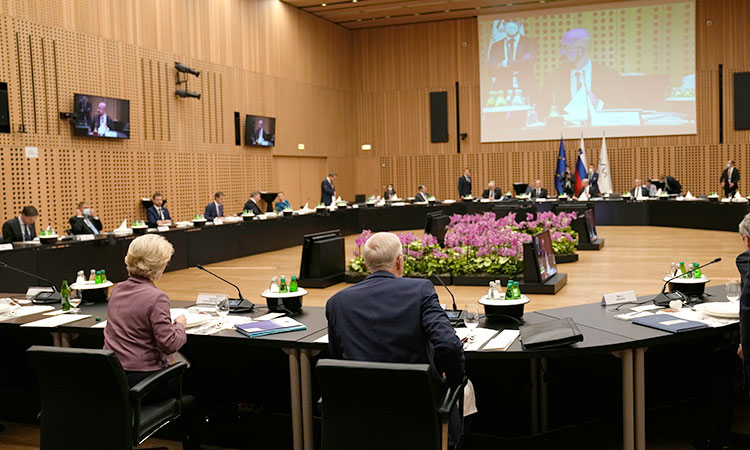 This photo shows a dinner event at the European Union summit in Kranj, Slovenia, on Tuesday. AP

"We Europeans need to be clear with ourselves. What matters to us in our security, on our borders, our independence?" said Macron, who had questioned the reliability of US protection of Europe before last month's dispute over an Indo-Pacific pact.

The transatlantic row was triggered last month by the United States' negotiation in secret of a military accord, known as AUKUS, with Australia and Britain to counter China, excluding France. Macron said he would meet US President Joe Biden at the Group of 20 meeting in Rome on Oct. 30-31.

The 27 leaders also discussed their relation with China, a theme they have not tackled as a group for over a year. Since their last talks, the bloc adopted a massive investment deal with Beijing but also approved sanctions against Chinese officials over human rights abuses in the far western Xinjiang region.

"We will also pursue our own interests, in particular vis-a-vis China, which we consider as a competitor, a partner and a systemic rival," Michel said.