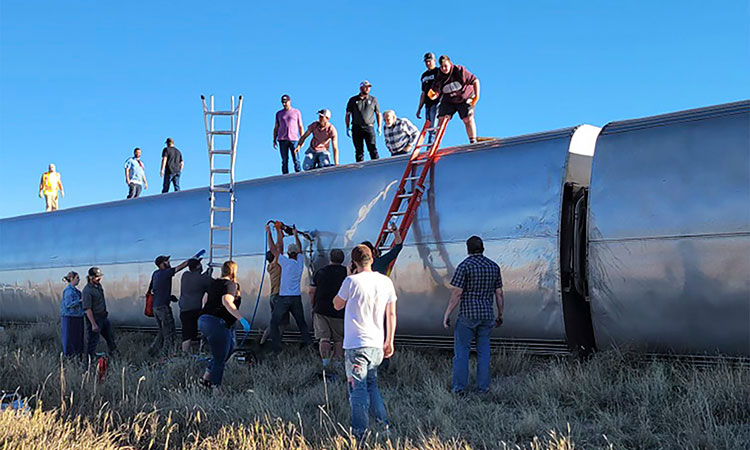 Local people try to rescue passengers after an Amtrak train derailment in north-central Montana, US, on Saturday. AP

At least three people died on Saturday and multiple others injured when a US train derailed in north-central Montana, an official at the local sheriff's office said.

Rescuers rushing to safely evacuate all passengers and crew as the National Transportation Safety Board said late on Saturday it will investigate the incident, according to rail operator Amtrak said.

Approximately 141 passengers and 16 crew members were on board when eight train carriages — travelling from Chicago to Seattle — came off the tracks at around 4pm (2200 GMT) in northern Montana.

"We are deeply saddened to learn local authorities are now confirming that three people have lost their lives as a result of this accident," the firm said, adding that there were also "reported injuries" among those traveling on the train.

People trapped aboard soon after the derailment have all been taken off the train, said the official at the Liberty County Sheriff's Office, who spoke on condition of anonymity. 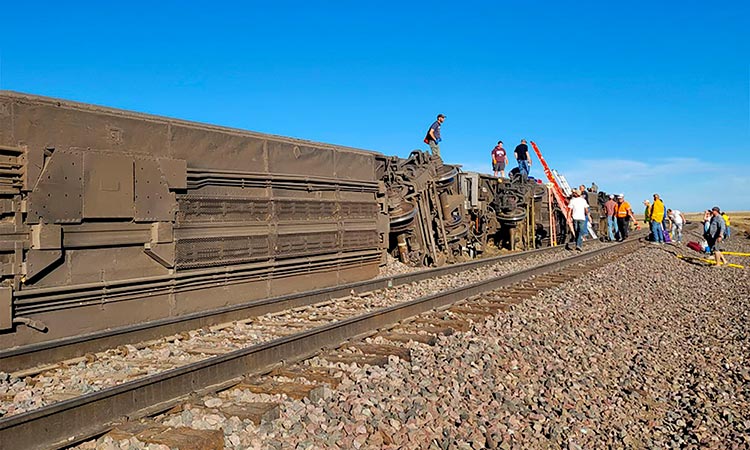 The scene of an Amtrak train derailment in north-central Montana on Saturday. AP

The local Sheriff’s Department confirmed the three deaths, ABC News reported, but authorities did not say how many people were injured.

It was not immediately clear what caused the incident.

Footage posted on social media showed people waiting by the tracks, luggage strewn next to them, with train carriages seen listing off the rails and at least one toppled onto its side.

The government's National Transportation and Safety Board said on Twitter that it was launching a "go-team to investigate" the derailment.

Amtrak said it had initiated its "Incident Response Team" and sent emergency personnel to the scene to assist local authorities in the evacuation effort.

Montana's Disaster and Emergency Services coordinator Amanda Frickel told the New York Times that "well over 50 people had been injured".

She said teams of rescuers were at the scene and multiple hospitals -- as well as medical helicopters -- were on standby.

Authorities were not releasing further details for the time being, she said, adding: "Everybody who is alive has been extricated from the wreck."

The Empire Builder train derailed in a remote area near Joplin, Montana, a town of around 200 people near the border with Canada.

The US rail network suffers from chronic underfunding and fatal accidents sometimes occur.

In 2018, two people died in South Carolina when an Amtrak train traveling on the wrong tracks collided with a stationary freight train, in a crash later blamed on safety oversights.

A year earlier, an Amtrak passenger train traveling on a new route for the first time derailed in Washington state, killing at least three people as cars plunged off a bridge onto a busy highway at the height of morning rush hour. 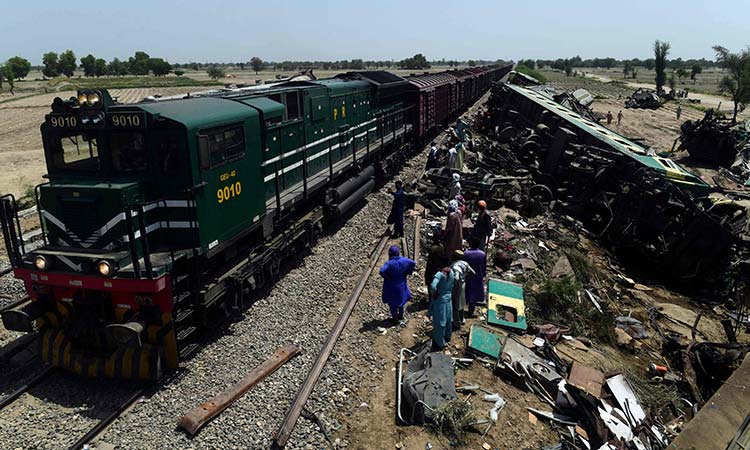