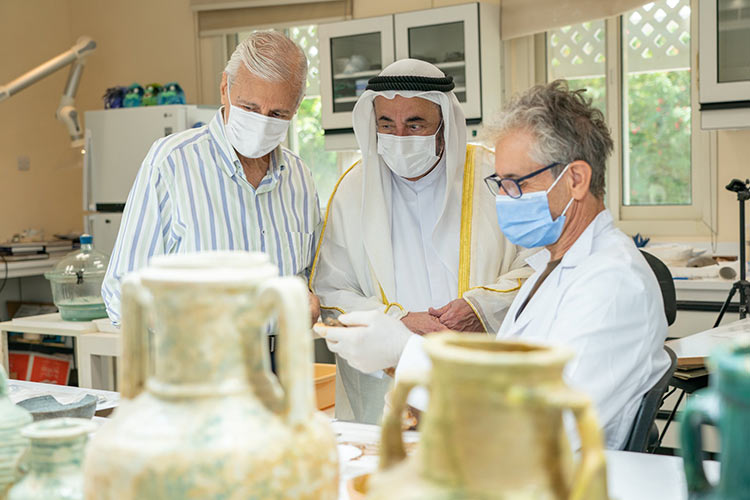 Sheikh Sultan is being briefed about the discovered items in Sharjah.

His Highness Dr Sheikh Sultan Bin Mohammed Al Qasimi, Supreme Council Member and Ruler of Sharjah, was briefed on Tuesday morning, during a visit to the Sharjah Archaeology Authority, about the latest important archaeological discoveries in the central region of the Emirate of Sharjah, which date back to the first Abbasid Caliphate (750-833 AD).

The new discoveries are evidence of the early Abbasid presence in the region, where a white glazed pottery jar with some green spots was found, and inside it was a treasure of Abbasid dirhams, as this jar dates back to the tenth century AD.

The time frame of this group, according to the date of its minting, dates back to between the second half of the eighth century AD and the early ninth century AD.

The discovered coins are dirhams from the eras of the Caliph Abu Jaafar Al-Mansur, Muhammad Al-Mahdi, Harun Al-Rashid, Muhammad Al-Amin and Abdullah Al-Mamoun, and dirhams for madam Zubaydah and pennies from the era of Caliph Al-Mahdi.

During his tour, the Ruler of Sharjah was briefed on the iron swords discovered at the archaeological site of Mleiha, which date back to the third — second century BC.

Sultan was also briefed in the laboratory of the Sharjah Archaeology Authority on an iron key dating back to the Roman period and one of the important archaeological contents of the authority.