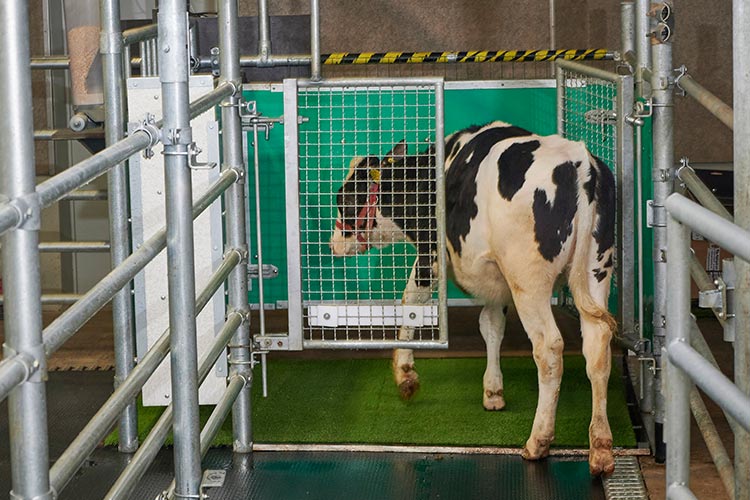 A calf enters an astroturf-covered pen nicknamed ‘MooLoo’ to urinate at the Research Institute for Farm Animal Biology in Dummerstorf, Germany.

Toilet training for pets is definitely not an easy task for their owners. It does take quite a lot of effort to make pets go at particular place to ease themselves whenever they have the urge to do so.

Pets likes dogs, cats and horses have an inborn tendency to go in special places whenever they want go to loo.

However, scientists in Germany has done the impossible, they trained a group of cows to urinate at a particular place.

Scientists believe cows can be potty trained as easily as toddlers.

Scientists put the task to the test and 11 out of 16 cows learned to use the "MooLoo” when they had to go.

The researchers used the similar way a parent use to train their toddlers,.

They offered a sweet treat to coax the cows to push through a gate and urinate in a special pen.

And it took only 15 days for them to succeed in training young calves.

Some of them took a bit longer to get trained.

They only trained cows to use the MooLoo to urinate, not defecate.

Mimicking a toddler's training researchers at the lab in Dummerstorf put the cows in the special pen and waited until they urinated.

Then they  rewarded them with a sweet liquid of mostly molasses.  Cows do have a sweet tooth.

For all those cows, who urinated outside the MooLoo got a squirt of cold water.

The researchers in two sets of experiments let the Holstein cows roam about the indoor facility. When they had to urinate, 11 of them pushed into the pen, did their business, and got their sweet reward.

However, during the experiment scientists gave diuretics to the cattle to get them to urinate more because they had limited time to run the experiments.