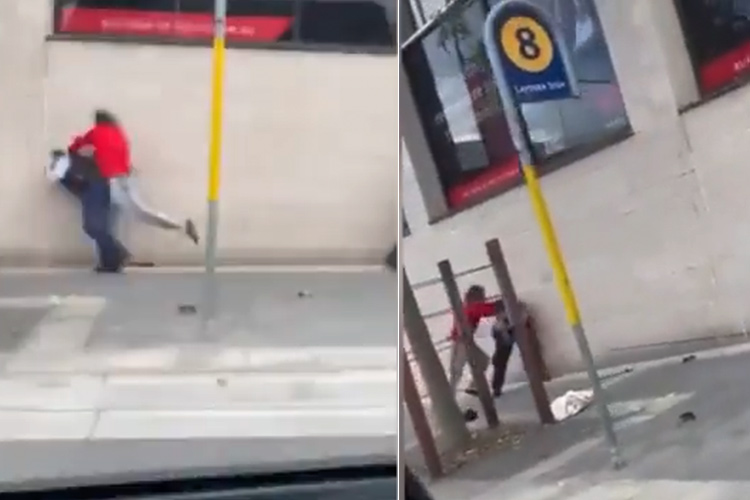 A videograb of man beating up the policewoman in Sydney.

A horrifying video footage has emerged from Australia of a man brutally beating a policewoman during lockdown to curb the spread of coronavirus in the country.

Two officers were seen patrolling Bankstown, Sydney when they notice the man standing on the road.

It was his moment; the Australian man brutally beat the female police officer, according to Daily Mail.

People with no reason to be outside will be taken in for questioning according to the law.

A motorist who recorded the video said the man launched the attack after officers told him to move.

The video showed the officer being kicked and punched repeatedly while another officer was seen radioing for help.

The authorities said that the female officer suffered cuts and bruises.

The authorities also said that the 43-year-old man was arrested on suspicion of assault and breaking the lockdown.

He has also been charged with allegedly attacking police officers.

Local media reported that the man attacked a third officer at the station.

According to Daily mail, three officers were treated at a hospital.

On the other hand, authorities are relaxing virus lockdown rules for fully vaccinated people in Sydney on Monday, with small groups allowed to meet for picnics for the first time in months.

Families and friends gathered in parks and at beaches, reuniting 11 weeks after an outbreak of the Delta variant brought Australia's biggest city to a virtual standstill.

The rules remain strict, with just five fully vaccinated people allowed to gather outdoors for up to an hour, while tougher rules are in place for virus hotspots.

Across Sydney, a five-kilometre (three-mile) travel limit remains in place.