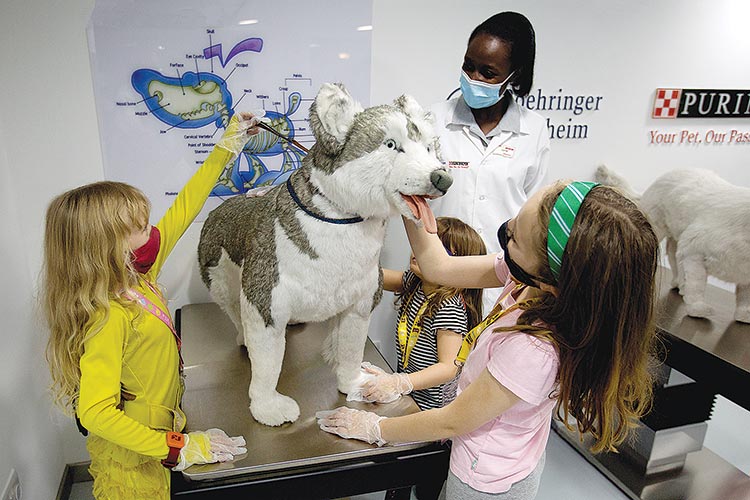 One family day, five girls were treated to a clinic where they learnt about pet care. They had the opportunity to be animal doctors.

For about half-an-hour, sisters Freya, Phoebe and Charlotte Dunlop and later on friends Ryka Pravin and Avantika Rajiv checked on the vitals of Misty, a Corgi and Sugar, a St. Bernard. Given stethoscopes, they monitored the dogs’ heartbeats. They also marked on their patients’ records their assessment of their eyes, eardrums and fur.

“There are no right or wrong answers,” Jane Kamau said.

Outside the clinic, Adele Dunlop said that among her daughters, it is Phoebe who dreams of becoming a veterinarian some day: “She is interested in Veterinary Medicine. She loves horses. Practically in all animals. Possibly of orientation. Family back in the UK works with blind dogs for the blind.”

But, hold on a sec. The veterinary clinic is a make-believe. A collaboration among family-owned German pharmaceutical company Boehringer Ingelheim, American pet food firm Nestle Purina PetCare, this is at the Kidzania in Dubai Mall where Kamau, at the time of the visit, was the lead vet/teacher to the young “veterinarians.” She said that over-all, children are fascinated, observant, inquisitive and attentive: “They ask a lot of questions. They ask where for example the cat is when they hear the meow.”

Boehringer Ingelheim-Animal Health (Middle East/Turkey/Africa) head Herbert Pohle said the partnership was established to “provide a focused and engaging approach to inspiring and educating the young minds  (through) fun, hands-on experiential learning, and spark interest among them veterinary science as a career choice. More importantly, the knowledge to care for animals properly in the right way. We believe that animal welfare is a fundamental element of animal health which is intrinsically connected to human health.”

On animal welfare, Soulful Baker owner Kamalika Mukherjee believes that whether wild or domesticated and tamed, these creatures should not be commercialised such that these are displayed and used for entertainment by way of live shows and circus, or even caged in zoos: “They must be given with equal attention and care as this planet is as much theirs as it is ours. We as humans do not have to do much. Nature provides for animals as it does for us. They must not be provoked to prevent sometimes fatal attacks.”

Over in Sharjah, Burjeel Specialty Hospital Family Medicine specialist Dr. Maissa Sulaiman said numerous studies have confirmed that pets improves one’s well-being as these lessens loneliness and anxiety. However, families must be conscientious in treating these animals as part of their intimate circle which includes trips to the veterinary clinic for the normal consultations, following the doctor’s order, and maintaining hygiene: “Apart from washing hands, the pet area must be frequently cleaned and disinfected.”

“Human health and animal health are intertwined as we co-exist in a shared environment. The close links result in the animals being the cause and cure of human diseases. Human-animal interactions may bring and spread zootonic diseases which means the illnesses of animals must serve as a warning for public health,” Sulaiman also said, stressing that everyone must take part in keeping animal populations healthy for higher farm productivity and safer food supplies.

Separately, Sheikh Mansour Bin Zayed Al Nahyan, Deputy Prime Minister and Minister of Presidential Affairs, has recently affirmed that the advanced government work ecosystem provided the launch pad of several pillars of the UAE’s development, stressing that enhancing such ecosystem will serve as a key enabler for the UAE’s progress in the next 50 years.

This came during the Ministerial Development Council meeting, which was recently held at Qasr Al Watan in Abu Dhabi under the chairmanship of Sheikh Mansour.

The council discussed amending certain provisions of the Federal Law concerning the practice of the veterinary medicine profession.

The move aims to regulate the field of veterinary medicine and support services, enhance the efficiency of the sector, in line with best practices and international standards, and safeguard the health of livestock and other animals in the country. 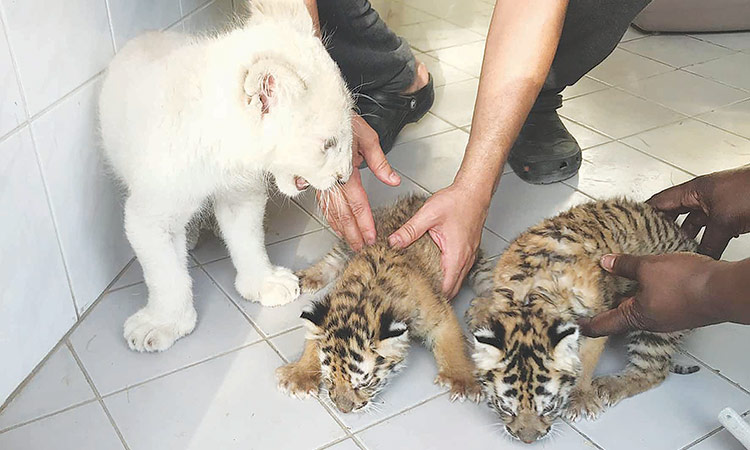 The Environment and Protected Areas Authority represented by the Environment Inspection Department in cooperation with Sharjah Police General Directorate recently announced that it has confiscated five animals, which was on sale on social media portals, after they secured a search warrant from the Public Prosecution to inspect a suspect’s house in the vicinity of Sharjah.