UAE announces '10 principles' to pave economic, political and developmental roadmap for next 50 years 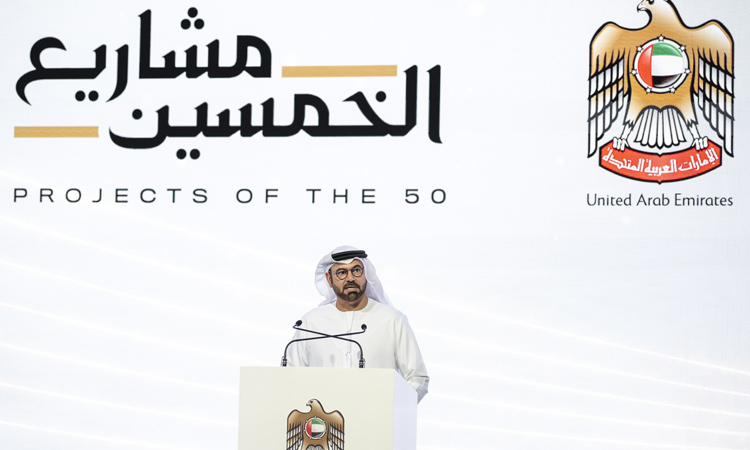 Mohammad Al Gergawi speaks during the launching of projects of the 50 in Dubai on Sunday. WAM

The UAE announced on Sunday “The Principles of the 50,” as part of the “Projects of the 50: campaign, to chart the strategic roadmap for the UAE’s new era of economic, political and social growth.

The 10 principles act as guidelines for all UAE’s institutions as the country approaches a new phase of development over the next 50 years as directed by His Highness President Sheikh Khalifa Bin Zayed Al Nahyan and envisioned by His Highness Sheikh Mohammed Bin Rashid Al Maktoum, Vice President and Prime Minister of the UAE and Ruler of Dubai; and His Highness Sheikh Mohamed Bin Zayed Al Nahyan, Crown Prince of Abu Dhabi and Deputy Supreme Commander of the UAE Armed Forces.

Sheikh Khalifa said, "Our sole, abiding mission is to provide the best possible life for citizens and residents of the UAE. The economy will lead the UAE’s path for the next 50 years, with a political approach that is based on peace and dialogue. The upcoming phase will see comprehensive and balanced development of all the UAE’s regions and sectors."

Sheikh Mohammed Bin Rashid said, "The UAE is one destination, one economy, one flag, one leader, and over the next 50 years, everyone will work as one team to achieve our goals. Our values during the next 50 years will remain as set down by the founders to be the best, most noble and most generous people." 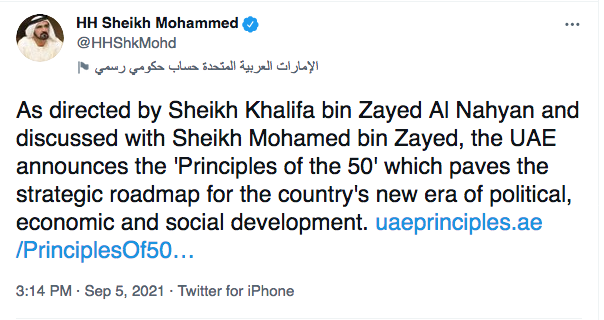 Sheikh Mohamed Bin Zayed said, "The UAE’s 10 principles for the next 50 years will be the core guidelines for all our institutions to strengthen the union, build a sustainable economy and harness all possible resources to build a more prosperous society. Fostering positive regional and global relations to achieve our national goals and support peace and stability across the world will be the centre of our priorities over the upcoming phase." 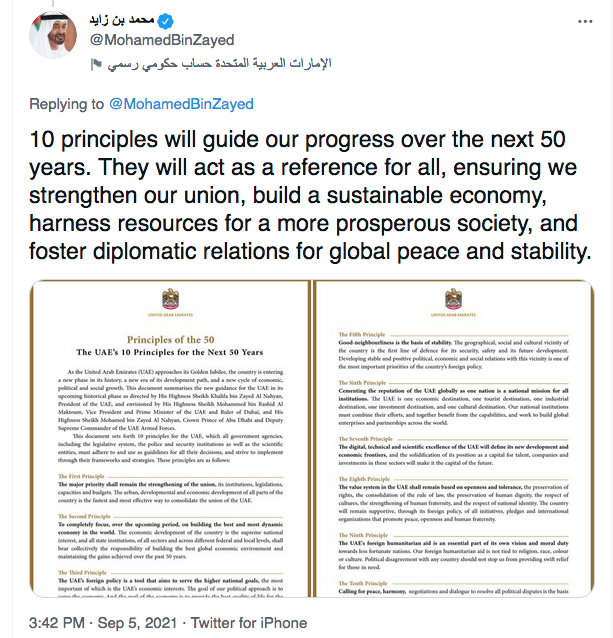 The 10 principles are as follows: The First Principle: The key national focus shall remain the strengthening of the union, its institutions, legislature, capabilities and finances. The development of the urban and rural economies throughout the nation is the fastest and most effective way to consolidate the union of the Emirates.

The Second Principle: We will strive over the upcoming period to build the best and most dynamic economy in the world. The economic development of the country is the supreme national interest, and all state institutions, in all fields and across different federal and local levels, shall bear the responsibility of building the best global economic environment and maintaining the gains achieved over the past 50 years.

The Third Principle: The Emirates’ foreign policy is a tool that aims to serve our higher national goals, the most important of which is the Emirates’ economic interests. The goal of our political approach is to serve the economy. And the goal of the economy is to provide a better life for the people of the Union.

The Fourth Principle: The main future driver for growth is human capital. Developing the educational system, recruiting talent, retaining specialists and continuously building skills will be key to ensuring the Emirates remains the most competitive national economy. 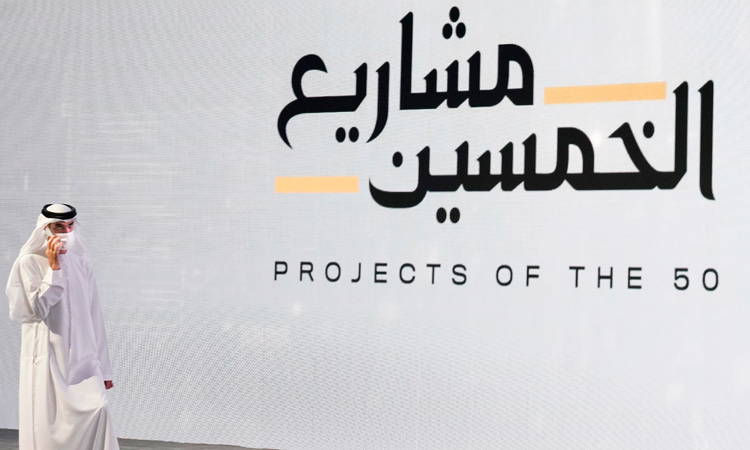 Thani Bin Ahmed Al Zeyoudi speaks on his mobile phone before the launching of the projects of 50 in Dubai. AP

The Fifth Principle: Good-neighbourliness is the basis of stability. The geographical, social and cultural position of the country in its region is the first line of defence for its security, safety and its future development. Developing stable and positive political, economic and social relations with its neighbours is one of the most important priorities of the country’s foreign policy.

The Sixth Principle: Consolidating the reputation of the Emirates globally is a national mission for all institutions. The Emirates is one destination for business, tourism, industry, investment and cultural excellence. Our national institutions must unify their efforts, benefiting mutually from their shared capabilities, and work to build global enterprises under the umbrella of the Emirates.

The Seventh Principle: The digital, technical and scientific excellence of the Emirates will define its development and economic frontiers. The consolidation of its position as a global hub for talent, companies and investments in these sectors will make it a future global leader. 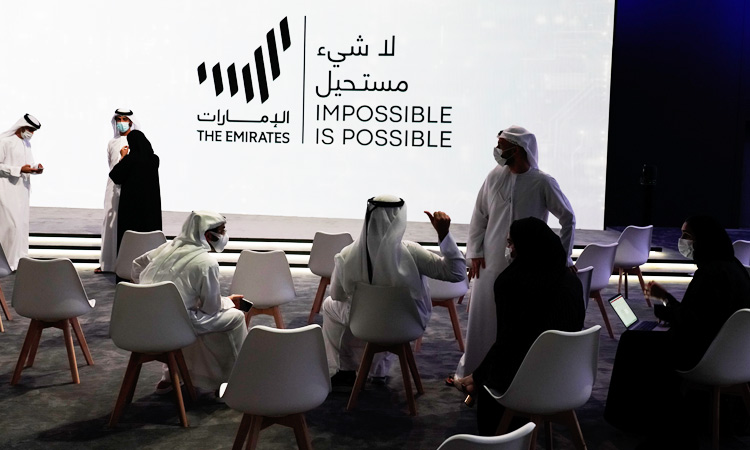 The Eighth Principle: The core value system in the Emirates shall remain based on openness and tolerance, the preservation of rights, the rule of justice and the law. We believe in the preservation of human dignity, the respect for cultural diversity, the strengthening of human fraternity, together with enduring respect for our national identity. The country will remain supportive, through its foreign policy, of all initiatives, pledges and international organisations that promote peace, openness and humanity.

The Tenth Principle: Calling for peace, harmony, negotiations and dialogue to resolve all disputes is the basis of the Emirates’ foreign policy. Striving with regional partners and global friends to establish regional and global peace and stability is a fundamental driver of our foreign policy.

As part of the "Projects of the 50," the UAE Government launched the Fourth Industrial Revolution Network to promote the adoption of advanced technologies in the national industrial sector. 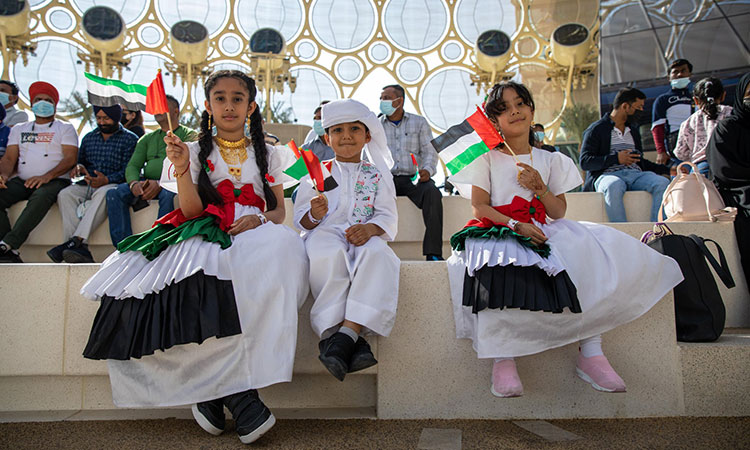 US congratulates UAE people on the Golden Jubilee

''We have enjoyed an enduring partnership through the last fifty years. It is one built on economic ties, innovation, people-to-people exchanges, and a commitment to regional security and stability,'' said Antony Blinken, US Secretary of State, in a press statement.